Is there a better solution to interact with multiple pathways that have the same endpoint, than using multiple breadcrumbs inside tabs or a dropdown?

I need to convert data of a structure similar to this: 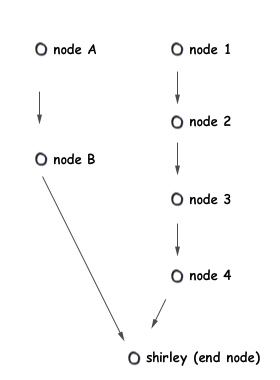 into an interactive, HTML widget.

This widget will allow users to start from the end node (which I'm calling 'shirley' here) and work back to the beginning by choosing any one of the many paths leading to shirley. Each node is a html page.

I've got two ways to do this:

1 - using breadcrumbs in custom tabs as standard tabs don't allow users to click on the individual nodes of the breadcrumb which is how users will be traversing up and down the structure. image 1:

Both approaches are unwieldy and don't scale well with the number of paths leading to shirley, but I'm leaning towards multiple breadcrumbs in a dropdown.

Update: While the nodes are HTML pages, they are not related to "site" navigation - the nodes do "history" navigation. Each node is a text snippet, and the nodes chained together form a "history" chain that the user will traverse. Nodes are created dynamically by the user's actions and there'll be about 100 to 150 such node chains(paths) on average per page, with expected peak of 1500. Chain branching is also by user action. Each path is created by the actions of ~multiple~ users with any one user having the ability to traverse the whole path (any and all of them) once it's created. Menus are not feasible.

Well, if you need to start from a specific place and you can go in different directions, then you just have navigation, it doesn't have much to do with breadcrumbs.

Normally breadcrumbs imply that the user has reached the current page through a series of nodes that he actually did take. So you can display those nodes, and the fact that there are other possible ways to get there isn't relevant.

Another scenario is when the user has reached the page through a direct link, without going through the preceding pages. In that case you can display a default breadcrumbs path, where you just pick the one that makes the most sense, e.g. main>category>product, even though it can also be reached through search>product or specials>product. If many routes make equal sense, just pick one and be consistent about it :)

But if you're trying to present all the possible routes leading to a page, then it's the same as showing all the routes leading out of a page - meaning you just have standard navigation. For example, you can do it step by step, with a series of one-level menus, or have hierarchical menus.

How many possible paths would there ever be? How much does this need to scale? Maybe you can draw an illustration of the location, similar to a train route map.

What happens when you go back, and select lets say "node 3" from path 2? Does the path 1 (and its nodes A and B) become irrelevant? Or not? If its only relevant to see both paths before user selects one node, and after that it does not matter i would definitely go with only one breadcrumb bar, and put on the side the other one. You just need to find a way to measure which one is more important.

while the second path is "Shoes by color › Brown › Brown Boots"

I would put the first path as the most probable way that people would like to go back, while the second one i would put as tags or something similar on the side.

A search engine. Even if your site navigation is fantastic, people frequently want to get to the information they want immediately vs. traversing a series of pages towards a destination. Unless there's a very compelling reason for them to follow a linear path to shirley, give them a way to avoid it. This has the added benefit of providing more useful statistics about what they're trying to find.

Not the answer you're looking for? Browse other questions tagged breadcrumbs or ask your own question.

6
How can I show the user where they are in a non-hierarchical page structure?