We're currently developing an app for posting classified ads where the user is able to upload up to 10 photos per ad (from camera or library). The app will be available for Android and iOS (with slight adjustments to the UI).

Once the user has uploaded two or more photos he can sort them manually - and this is where I can't find an elegant solution. My thoughts so far:

My questions: Is there a better solution I didn't think of? Thoughts or ideas? What do you think of this wireframe? 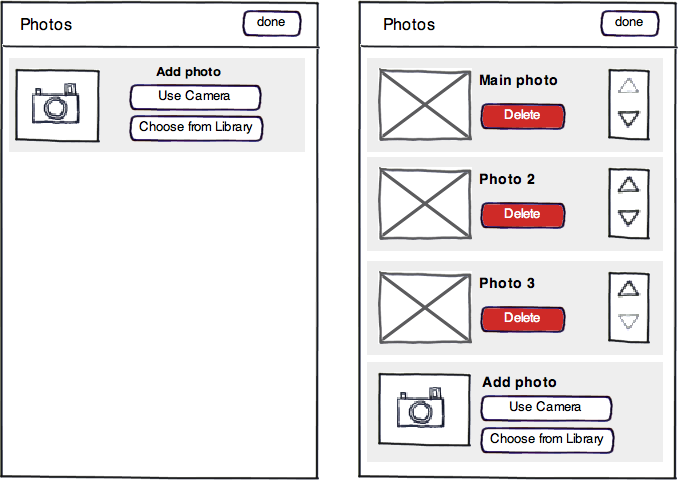 It depends on how much you're prepared to depart from familiarity and other standard methods such as buttons, but you could perhaps combine arrow shaped almost-but-not-quite-buttons with a raised stippled or ridged texture for affordance of drag.

Here are a couple of examples: 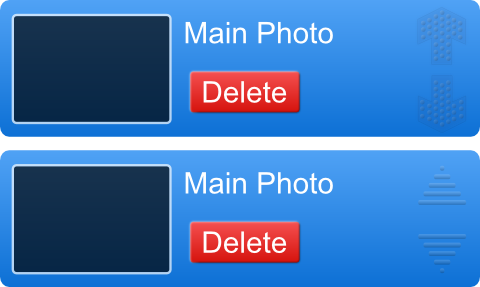 If the user drags them that's great, or if the user taps them, just nudge the photo up or down one accordingly.

We can use standard behavior for "Delete" option like swipe to left on the row like image below.

In sorting we can have simple sort icon (like drag). No need "Done" or "Save" button, if he drag top/bottom it will save automatically. 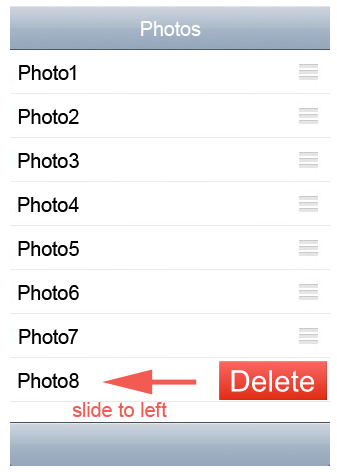 It's one thing to have those dragable areas immediately visible, its different to show them after pressing edit button at the top of the app. Showing them after toggling the edit mode immediately gives them context.

I like it how favorites in the phone app on iphone work. Try something like that. You can just adjust graphics of drag symbols for iphone or android.

I remember seeing that crossed double arrows that point in all 4 directions if something is draggable.

I think Pinterest's waterfall style is a good idea. In this way, users can see more pictures at a time. And it's also good to allow users to drag picture around to resort the pictures.

If you're worried about discoverability why not include a concise tutorial during the install/set-up? It only needs to be a single screen with a couple of diagrams but it would solve the problem and simplify your controls.

So many mobile devices and apps these days have them that as long as it's not a total UX blocker it wouldn't seem out of place.

Not the answer you're looking for? Browse other questions tagged mobile android ios or ask your own question.

15
How to structure Android app navigation with many levels?
23
Asking feedback/rating for a mobile app?
1
Sorting (ascending/descending) in android mobile app
1
Swipe pattern on a mobile app
2
Where to put 'Home' button in iOS UINavigationController
4
App - Should a user be able to edit the text of a tweet or facebook post?
10
iOS using tabs in modal view to show camera/multiple photo galleries
1
Manual Saving/Loading from Dropbox in Mobile App
2
Using a carousel control in mobile app
2
Mobile - Sorting Items on one tab