Can you combine User Experience Elements (JJG) with Design Thinking?

I'm currently starting on a project with a colleague who has a very different approach (compared to what I'm used to). I tend to work with the "Element of User Experience" by Jesse James Garett. Meaning I work with:

Now, my colleague tends to work with Design Thinking, so he works with:

(I know that Design Thinking loops a bit more, but that's the gist of the process). 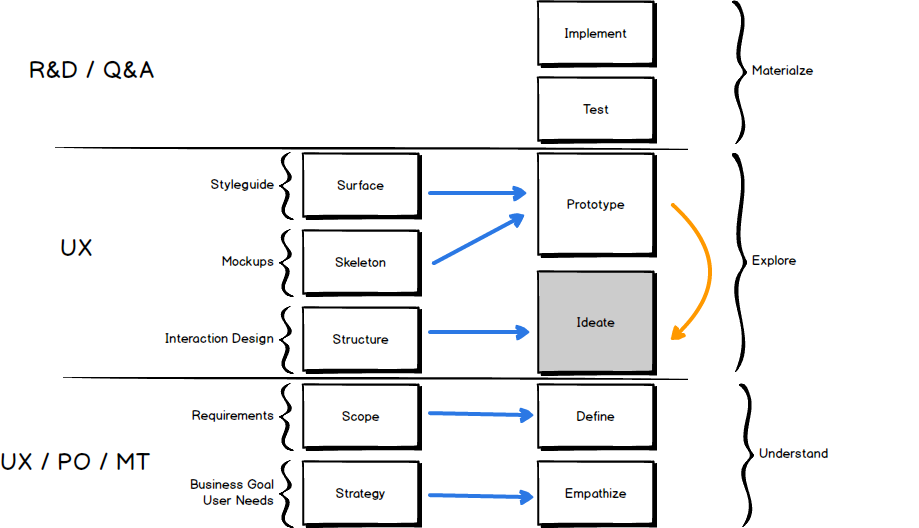 I was mostly wondering if this would be a viable approach. Or is this something that shouldn't be done together in the first place?

I would look at these as complimentary frameworks.

Design Thinking is mostly defined by time: what phase of a project you are in from empathising to testing.

JJG's Elements of UX is mostly defined by the hierarchy of decision you are making: fundamental to superficial.

There's a relationship of course: fundamental decisions come earlier in the project.

Here's roughly how I'd map the two together over time. This indicates that as you move through the design thinking phases you would also ascend through JJG's planes, engaging with a different type of decision at each level.

Of course life isn't usually this linear, there are likely to be loops in there as you mentioned.

Another thing to note: Design Thinking can be applied to problems outside the typical UX space. You could go through the design thinking phases on something as visual as a Logo or as non-visual as a book or business model, for instance.

I'm not too familiar with the "Element of User Experience" by Jesse James Garett or what roles you and your colleague take on. When I first looked at your diagram I assumed you were UX Architect and your colleague was design, but why would Architect stop before implementation and testing?

The more I look at this the more questions I have but don't let anyone tell you how you two should work together without knowing more info. Try it out! Keep documenting your process and open to tweaking your process, you never know what could grow to an entirely new method.

Not the answer you're looking for? Browse other questions tagged design-thinking or ask your own question.