Im working on a mobile flow that allows a user to deeplink to separate jobs within the same app via toast messages and/or notifications from a notification centre.

Im struggling with getting back to the original start location. 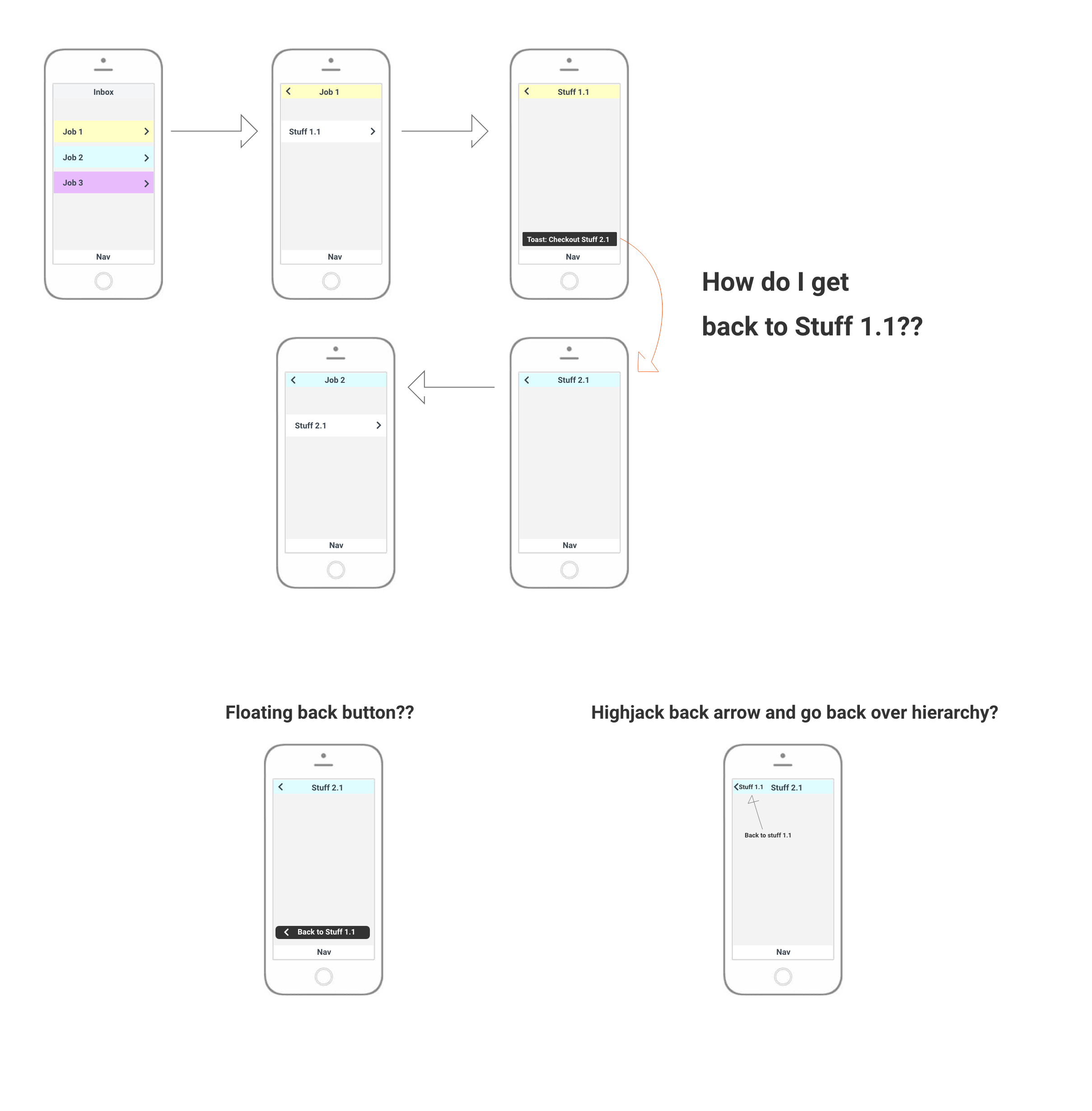 When going from stuff 1.1 to stuff 2.1. If hit the back arrow on stuff 2.1, it should take me to Job 2. This seems correct from an IA, flow point of view because I have now plopped my user in a page of the flow.

I am perplexed with how to get back the the original screen from a different part of the app after selecting to go view that data.

The 2 options I have thought of so far are:

On Android, the arrow at the top left (or right if in RTL mode) of the screen is not a back button, rather it is an Up button (typically known as the Up affordance). It should work differently to the Back button (which should always be available either as a hardware button or software button provided by the OS).

When deep-linking into an app from outside, it is best practice to have the Back button exit the app (taking the User back to the app that they navigated into yours from). Apps that disobey that are effectively hijacking some other app's session, and suck for doing that (e.g. Twitter). The Up button/affordance, however, provides a means for the User to intentionally stay within the deep-linked-to app.

iOS doesn't have such depth in UI/UX navigation patterns, the only means of going back is the top-left arrow and that should obey the backstack (i.e. in this scenario taking User back to deep in Job 1.1, doing otherwise would be hijacking the backstack). So your idea to provide an extra means of navigating could work well, but I suggest it takes the User to the top-level of Job 2 rather than the last screen on the backstack.

Not the answer you're looking for? Browse other questions tagged navigation back-button or ask your own question.

4
Back button (or similar) and breadcrumbs, or just breadcrumbs
3
Navigating to details of an item from the list
2
Navigation on mobile site - menu or back button?
88
Should a web-based UI rely on the browser back button?
3
Back button look bootstrap which one to use?
8
Android UX - When to use navigation drawer
1
How to simultaneously open pages from different places in the hierarchy in the desktop app?
4
Does it make sense to put a back button on first page of a wizard?
0
Best way to handle browser "back" functionality for a voting webapp
1
Browser back button - behavior on gray area changes (ie. list/grid view)