Is there a guideline, convention, or some studies done which can help developers/designers decide when to open the select list exactly? On mousedown or on click? 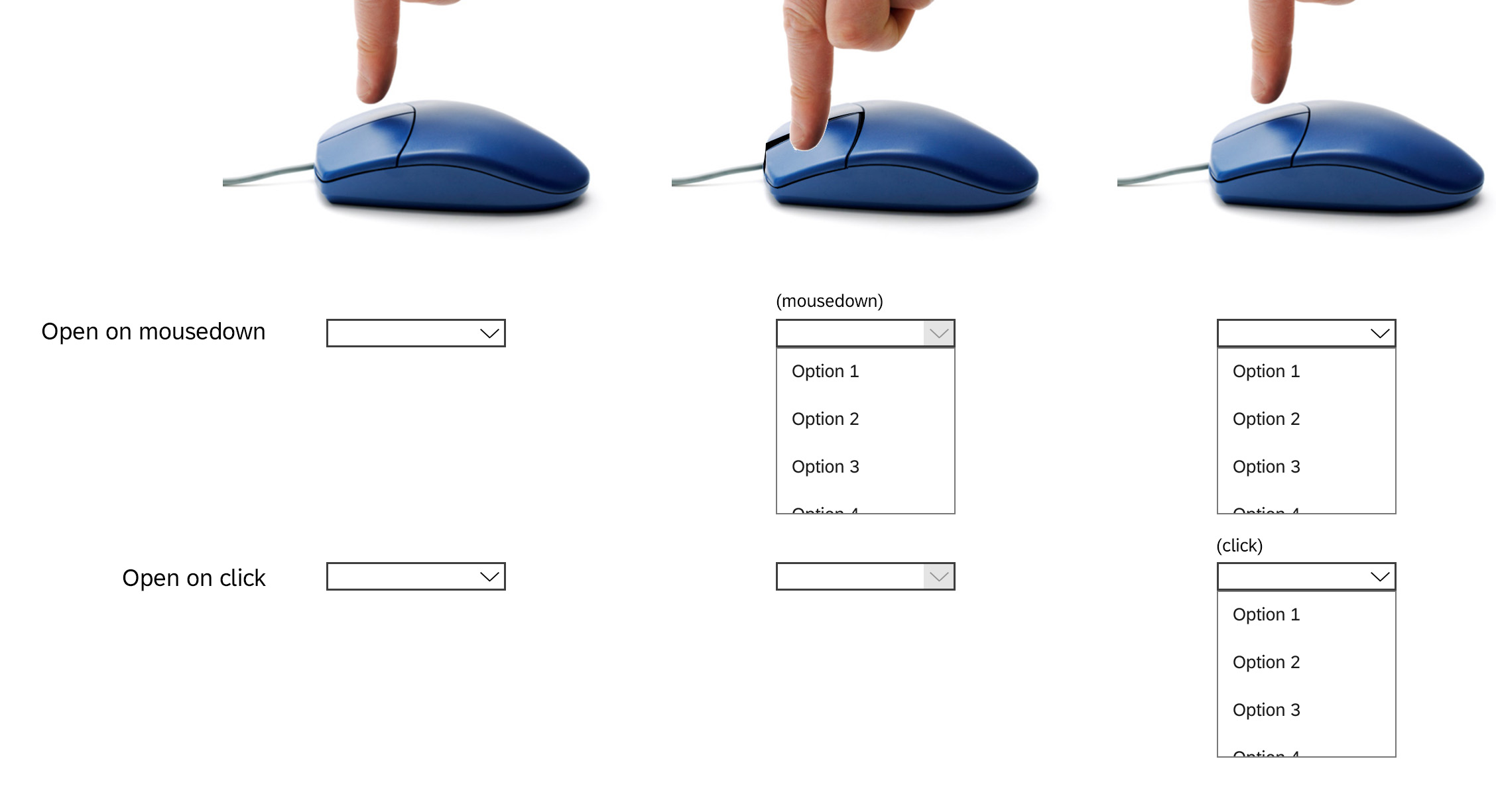 Some custom third-party select implementations open the list first on click (mousedown+mouseup on the same element), whereas other implementations - especially the native ones - open it already on mousedown. Try, for example, the native HTML <select> element in your browser.

In my observation (using a Windows machine), all browsers opened the native select list consistently on mousedown, so there must be some guideline or convention when to open the <select> list with reasons behind it.

Personally, I'd also prefer opening the list on mousedown to improve perceived performance as well as consistency with the native behavior. But instead of personal opinion, I'd like to know what the general recommendation is (if there is any) and why with some numbers.

From an accessibility point of view, It is recommended that the event should be fired on mouse up rather than on mouse down.

This will be helpful for users with dexterity/motor disabilities, Who might accidentally click on the list without the intention to do so. So when the event is fired on mouse up, that will give these users a chance to cancel the action by moving away from the target holding the mouse down.

By following this method the application can be complaint with Success Criterion 2.5.2 (Pointer cancellation) of WCAG 2.1

you can read more about it here: https://www.w3.org/WAI/WCAG21/Understanding/pointer-cancellation.html

Sooraj MV is correct that actions are recommended to only be executed on mouse up, however simply opening the Select Input is an action that can be reversed and recovered from, by moving the mouse away and releasing.*

Looking at the success criteria of the WCAG guideline, it states that one or more of the following have to be satisfied:

I would argue that opening the Select form control on mouse-down and having it close on mouse-up outside the control satisfies 'Abort or Undo' (if completion is defined as the selection of an option, though debatable) and 'Up Reversal' (as the mouse-up reverses the opening of the control's options without forcing selection).

One benefit of it opening on mouse-down is that in the one interaction (mouse down, move, mouse up), you can select an option, as I've visualised here:

You perceive it to be quicker not only because there's immediate feedback closer to the first part of the interaction (mouse-down), but because it actually is quicker to achieve your goal of making a selection.

I could not find any reference to the 'correct' behaviour. I would have expected it referenced in W3C Forms / Select, or Microsoft Combo Boxes documentation pages.

You may want to factor in whether the application is used by expert users who will become very familiar with the interface and benefit from any potential accelerators (typically business portals, service oriented web apps), or more-so by new users who wouldn't take advantage of that accelerator (typically ecommerce websites).

If the component has everything else going for it, create a basic prototype using it, and see how the difference in interaction design impacts users, if at all.

As an aside, the trouble with web components is that they are often consistent within their design system / component library, but don't adopt the conventions of the ecosystem they exist in (browser / operating system).

* This behaviour is seen on Chrome / Mac, I can't attest as to why different browser and OS combinations may work differently.

Mousedown is indeed faster according to Design, User Experience, and Usability: Users and Interactions: 4th ..., Part 2 edited by Aaron Marcus

"Mouse down based selection tasks were shown to have higher performance than tasks based on mouse up events."

What is known is that when it comes to deciding between click or mouse down action, the factor to consider is error prevention.

For example Google Chrome uses mousedown to switch pages and click to close a page.

While experienced users might not click things by mistake a lot of motor-impaired users can misclick and offering the option to cancel out a gesture is useful but again especially where the action can lead to error.

On a more personal note on Macbook in the Display Settings there is a dropdown for Rotation that is accesed by mousedown. A person with impaired motor skills would easily rotate their screens by 180 degrees.

So I would recommend that you ensure that the changes made by making a selection in the dropdown are not huge, irreversible and that visual cue is provided when making a new selection.

Not the answer you're looking for? Browse other questions tagged dropdown drop-down-list mouse select or ask your own question.

1
Conventional keyboard modifier for expanding/collapsing hierarchical tree view
10
OK for dropdown button to be on the left?
12
Patterns for keyboard accessible drop down lists
3
Drop-Down List with two types of data? User choice of either
13
Why are keyboards, mice designed to make sound when pressed and clicked?
2
What are some creative patterns for viewing and selecting individual items in a large non-hierarchical list?
0
Double click behavior
1
Pros/Cons of having a select menu open by default?
4
Touch-friendly nested checkboxes/drilldown