I will explain briefly.

I am working for a new booking accommodation platform. They currently have two different websites:

For the moment if you are on the BETA and then click on the company logo on the nav bar you go back to the main landing page.

To go back to the BETA when you're on the Landing there is a link on its respective nav bar and also all over the site.

NOTE: the BETA platform and the Landing page have different and separate nav bars and links [the design is similar] - The BETA has a profile dropdown menu that cannot be replicated in the main landing page since the websites have been done using two different services.

→ Now the company needs to have a proper homepage for the BETA platform with also some new features, but it also still needs to keep the main landing page.

Which you think is the best practice to link the two homepages without confusing the users?

I think this shouldn't be an issue. Beta testing should always be done by invitation and controlled as much as possible. As such, it should NEVER have a link to the existing site.

You need to make sure your users will test the beta version and nothing else, and they need to be aware that the version is a beta one. If you don't do this, the amount of unknown variables would be so high that any result obtained by the investigation of the beta version will be doubtful at best, not to mention problems such as NDAs not signed, uncontrolled flow of information, competitors being able to see what you're doing before release... well, it would be a complete chaos.

So to answer your specific question: The best recommendation for "best practice to link main website page to BETA website" is DON'T DO IT.

Usability vs Beta Testing (The What & When)

A case for beta testing

I think there are 2 Beta testing environments, first identify which one you're in.

Done with loyal customers that are very engaged in using your product in offering feedback about your product/services. This phase is usually good for testing new features that are not ready yet to be out in the open.

I would not put the link of the BETA version on this on the homepage if your in this phase. I would recommend you activate it for a small group of loyal users. Take Reddit as a good example here. They have a BETA subreddit where users cand join and comment on the new interface so the product gets improved in that phase.

For everyone in your platform and they can access it from homepage. Anyone can switch to this new version of your interface and can test it out.

Also, very important is to offer them a way to go back and catch feedback when they do that. It's really important to understand why they switched back to the old version.

Here is an example from Reddit how they can switch back to the old version: 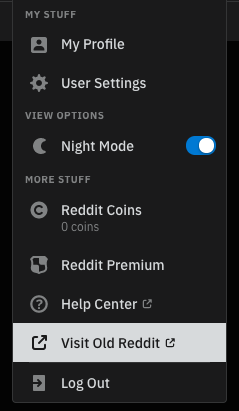 The best advice here is:

Important: Keep a way for the user to deactivate that BETA toggle back to the old website and catch that feedback.

Not the answer you're looking for? Browse other questions tagged website-design navigation or ask your own question.

2
Linking back to previous webpage?
7
Best way to display a nav item with a single sub-page?
0
Navigation on subdomain site
0
Call to action as a main navigation link
1
Adding “submit your story idea” to navigation bar
6
Recommended IA and Navigation Architecture for a single long page scroll?
1
Is it a good idea o use the link on the logo to display a sup-header with navigation options?
2
How to link back to the original site the user came from after he jumped to a subdomain with a “different” product?
3
What to do with an empty bottom menu bar on mobile?