Why would one use "enter the name of the project to confirm"? 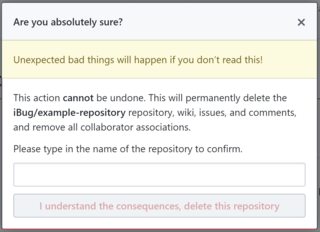 20
Solving the "accidental confirm" problem with dialog boxes
4
What are the Best Practices for Server Side Tabs?
0
Split button for navigation?
3
Email: to confirm or not to confirm....that is the question.
95
Deletion: Confirm or Undo? Which is the better option and why?
1
Best practice for location based URL structure?
5
Why should "cancel" and "confirm" button have the same size?
3
Should an operation pause while a "Confirm Cancel" dialog is on the screen?
0
How to have a better wording for the meaning of "confirm column to show up"
1
Continuing setup on another page and/or modal a bad practice?