How to explain the authorisation of the system to users

The problem I currently have is: users do not understand the authorisation of the system well (i.e. what a user can do in the system depending on his roles and other things, not to be confused with authentication).

We are developing a business system, and the business requirements towards authorisation are unfortunately rather complex.

Now, users often are confused at why they cannot see a certain object another colleague sent them, or why they cannot edit certain objects. They often ask us to tell them the roles that they currently have, but that actually doesn't really make it understandable for them. Then they want to know what roles in what configuration they would need for XYZ.

The authorisation works as follows:
Users request a role in a central role management system according to their process roles. During the request, they additionally have to select certain attributes for the role which denotes for which parts they are actually working in that role.
Our system then maps their roles to rights. Additionally, these rights may have conditions on the attributes the users selected for their role.

Does anyone have examples or ideas of how it could be made more transparent to the user, so that they

The questions your user has (who can view this, and what are my current roles) can be detailed near the item to which they lack access. 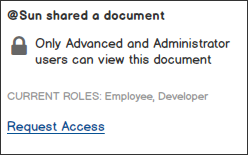 I tend to find it best to be as transparent as possible to the user regarding issues like this.

5
How to handle creating new account with email address that is unverified on another account?
5
How can I encourage users to select the 'correct' reason on a contact form instead of just the one which actually sends a message?
5
Removing Admin rights from an Admin user
1
How to recommend improving usability of something that doesn't exist yet?
1
How to get users' heads around multiple views on the same dataset
0
Layout for assigned roles to users and organizations and managing those users
4
UX best practice for role based access?
3
A different profile photo for each user's role?
3
How to display and modify one-to-one relationships
0
How to prevent users from circumventing a form?