What's the best UI element for "Reset to Default" for the fields in a form?

I can think of three solutions:

What do you think of the above three solutions? I'm open to other solutions if it's more intuitive.

Thank you for your time and feedback.

Question: Link, checkbox, or switch? Answer: None of the above.

User generally expect links to navigate –that is, take them to a new location. Switches and check boxes set attribute values or states –that is, what something is like. That would be suitable if the app simply switched the text from one characteristic to another (e.g., bold versus normal font), but that’s not what it’s really doing. Setting to default wipes out what the user had entered and replaces it with per-determined text. It doesn’t just change what the text is like. It changes what it is. Also, as you imply, it’s unconventional for a checkbox or switch to change on their own due to user input somewhere else.

What you’re want is something that makes a command –performs an action than changes something that's represented somewhere else. That’s the job for a command button (or a menu item). More than other controls, a command button signals to the user “you about to do something substantial, possibly irreversible.” The clue that you need a button is that, without it, you need to add the verbiage: the link is labeled “Reset to Default” or the checkbox is labeled “Use Default.” The fact that you need to start with a verb indicates the system does a command. Usually it's sufficient if links are just the name of the location that the system navigates too (a noun) and checkboxes/switch are the name of the state or attribute the thing acquires (an adjective).

You are right to be concerned with clutter, and command buttons have the disadvantage of being visually “heavy”. You can mitigate this several ways:

The user needs to know that:

If you have the default Title and Description as text and allow the user to hover and see an edit field around it they will understand they can edit that field. Having them as text on the first instance will make them understand that's the value that will be submitted. The 'X' next to the field once they start typing let them clear and restore the default value.

Depending on your title it would be clear to the user that that's how the entry will be saved, on my example of a note taking app, Note #109 says to me that I don't need to worry about a title as my note will have a neat unique identifier. 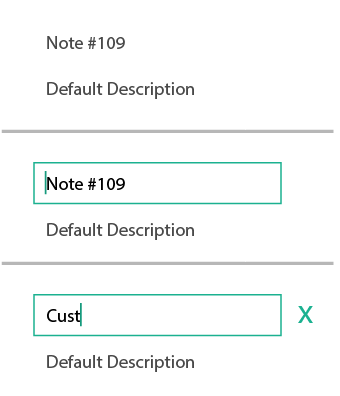 Reset to default is no state, so it should not be a switch, checkbox or radio button.
Resetting to default is an action and the best element for actions is a button.

If you want an indicator if a field is still the default, separate it from the action, e.g. give the input field a lightgrey background until it is changed and reset it to lightgrey when the button resets the value.

1
Incorporating a range-slider in a form: jQuery UI or degrade to <select>?
5
i18N and form design
4
Should dropdown background color be same as other (text) inputs on a form?
1
Best Practices on toggle switches and defaults in forms?
1
How to handle default inputs than can be overruled?
3
Form input to accept array of strings
2
How to keep a smooth UX with multiple inputs
25
Form layout with fields which are sometimes input and sometimes output
0
Display old value and new value on forms and grids
2
"Reset to Default" UI for Computed / Synced Fields