Listing multiple events with sub-events on a page

I have a fairly large collection of martial arts events that I'm listing on a page.

Each event happened on a given date and in a given location (country, state, city).

When I had much fewer events I simply listed the events in chronological order with a heading for each year, a smaller heading for the event country, date and name, and the event's tournaments as a list below that heading.

Now that I am dealing with hundreds of events this has become a pretty bad way of displaying the results, so I'm wondering about what would be a better way to display all this data.

The naive implementation would be to use a large table for everything. The benefits of that would be that it's open to sorting, filtering, etc. but it would also mean a lot of redundant data (event name and year repeated over and over) or empty cells.

I've tried googling for existing examples, but I've been unable to find anything that matches what I'm looking for.

Here's an example of the current layout, which really struggles when there are hundreds of events: 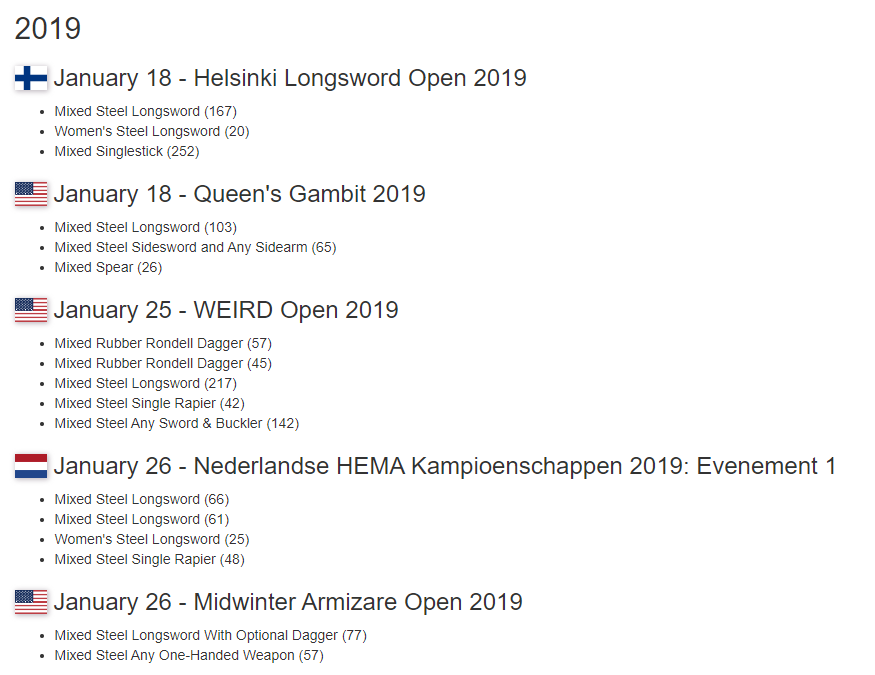 And here's an example of the naive implementation where everything's in the same table. This has a lot of repeated information since each tournament now gets a separate line: 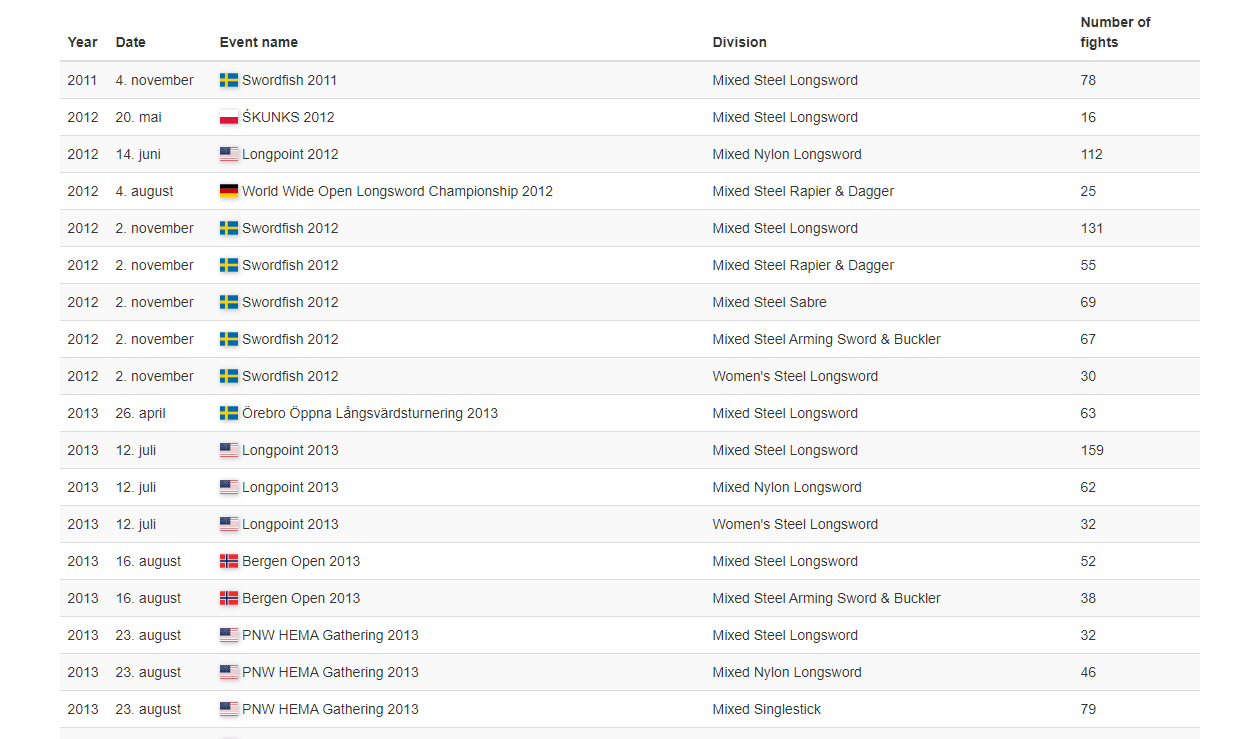 You must do it by yourself and show alternatives that you tried.

I did a fast wireframe for you to think about.

On my example, I just reorganize grouping by year, month and ordinate by days. I mixed countries because it's easier to find by date and if you need to see by the country you just make a filter on the results. 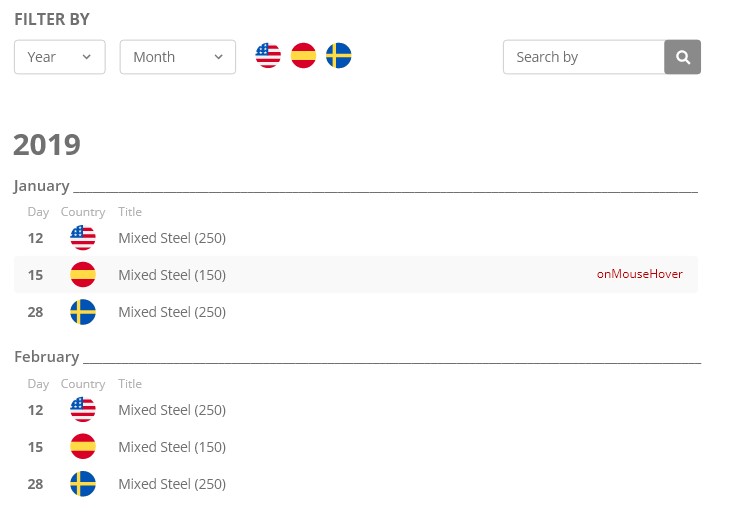 Please observe that this is not a design is just a wireframe and you should work on it to looks nice.

If I understood you are looking for something like this. 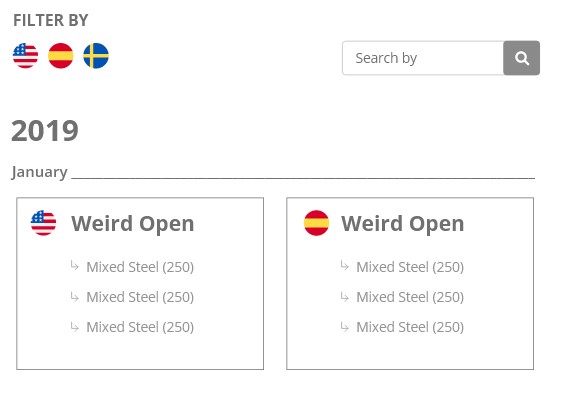 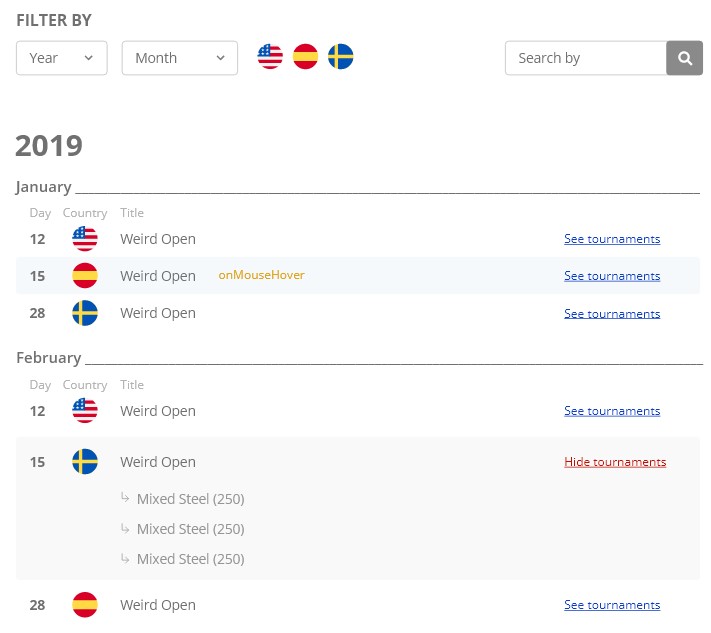 Not the answer you're looking for? Browse other questions tagged tables data or ask your own question.

6
Better ways to display/interact with tabular data
8
How to best display a table of data with sub items?
4
display a table of data with action to add new row
4
A good way to display tables with sub-headlines
3
Sub rows within complex tables
2
Alternatives to pagination for dynamic tables with many entries
1
how to display multiple graphs on a single page?
2
Best way to display large dataset on mobile?
7
Interactive Table with graph drilldown
2
Time Series with Multiple Attributes for Each Year