Should a button become lighter or darker on hover?

We're having a discussion in the office about whether a button should become lighter or darker when a user hovers over it.

Here are some examples from the field:

The button on FogBugz homepage goes from yellow to slightly lighter yellow. The buttons on Optimizely and Visual Website Optimizer hardly change.

Finally here is our button:

Should your button become lighter or darker when you hover over it? What else should you consider? Does anyone have data on whether the hover effect matters for conversions?

There isn't any pattern common enough to be considered "normal" for this by most people, so it doesn't matter which you choose as long as it makes sense for your application.

The important thing isn't whether it gets darker or lighter on hover. It is that there is some change. Someone using a site isn't going to say "that changed to dark on hover instead of light, so it must be something else".

The change is there simply to let you know that it is clickable in addition to any cursor change. Exactly what change that is, is more of a design or aesthetic question than a usability one.

Let say that you have the more common scenario of dark text and no other part of the design changes on hover and it's the background only, then when you hover, the button should be given a highlight. You're trying to focus on an item - to examine it and therefore it makes sense to brighten it up as if giving it more light to see by. Appearing backlit or frontlit makes no difference.

Except... however, this is not a universal written rule - it's just logical - and common.

The key is not really the colour, it is the contrast.

The key outcome of the above scenario is that the button under the hover is slightly more clearly identified and the figure better contrasted against the ground than it's neighbours.

Eg as at apple.com.

Not that Apple are necessarily the byword for 'correct'! - For example - these download buttons don't have any effect with hover or press!

When you hover over an item, you want to highlight it (make it 'pop' as some clients would say) compared to other items around you.

So on rollover ...
When the background text is WHITE, you DARKEN the button to emphasize the contrast.

When the background text is BLACK, you LIGHTEN the button to emphasize the contrast.

An additional advice, make the drop shadows appear BELOW the text, NOT above. That play with shadow would give a sinister look to your designs. A common movie trick, to make an evil character identifiable is to shine the light source from BELOW.

Depends on the background color, doesn't it? A button preferably becomes "more visible" relative to the other UI elements when the end user hovers over it, so in a dark design they would become brighter and vice versa. (Note: I said "brighter", not "less opaque" :))

Taking the examples from Material design - buttons my impression is that buttons become darker if they are light and lighter if they are dark: 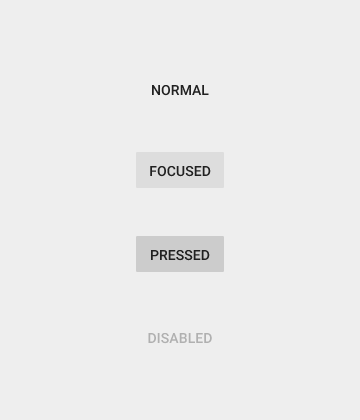 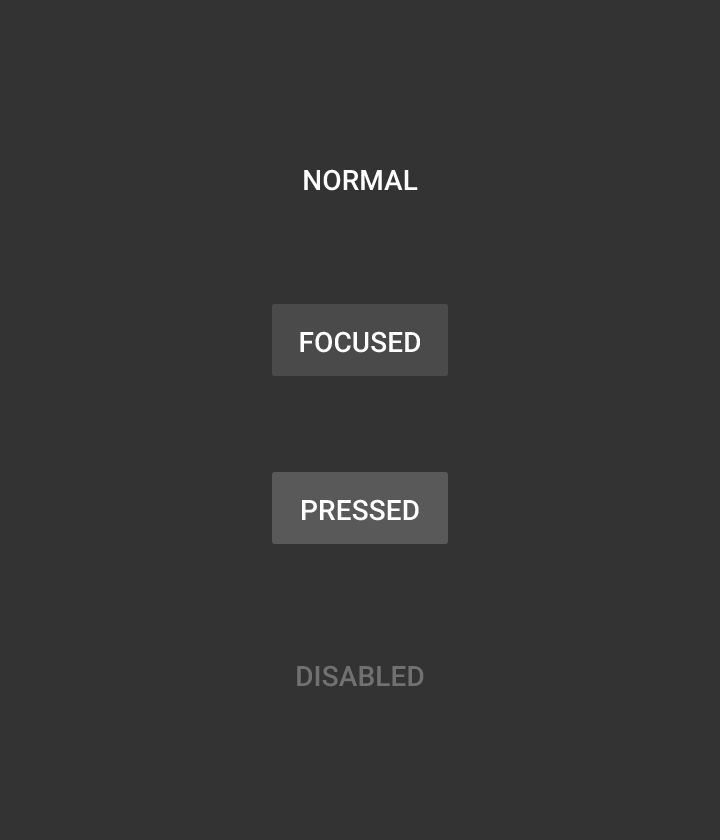 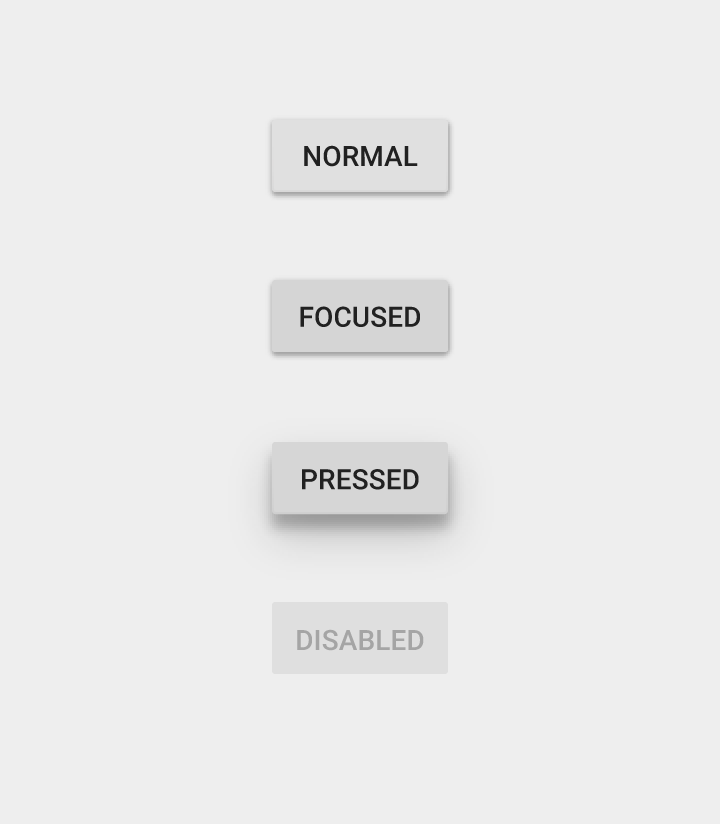 Something I noticed through the guide, but I'm not sure if it is mentioned, is that buttons maintain their text color when pressed or hovered.

I'd say it's a bit more complex than lighter or darker. You want to make it stand out from the other buttons, and if less white does that, then that's fine. I say less white because that's different to more black (imagine mixing paint from those big bottles that you used to get in school). More black can give the appearance of the button being in shadows, which might make it look depressed. Making buttons look depressed should be reserved for mouse-down IMO. Don't do it for hovering.

Of course, there will be occasions when more black won't make the button look depressed, but it's a good general rule, especially since most of your examples gave the impression of being 3D.

Hover state must be brighter then the default. You can highlight it with different color scale for text or background or with shadow or light.

The simplest example: textual links usually are in blue with no underline, on hover it becomes underline.

Are there other buttons/links on your site/app? And how's your UI treatment for hover or onClick? Key things to think about are consistency and relevancy.

Consistency is something that is not need to be explained, as long as you have an understanding of displaying similar UI design patterns throughout the site.

Relevancy is just to think about how strong of a call-to-action do you want this 'Connect' button to be? Are you afraid that user may not understand it is actionable button, or are there a specific reasons why you want to have the button change onHover? I think what I am trying to get at is if you design the button to standout from the rest of the elements on the site, why is there a need to change the color from lighter to darker or vice versa in the first place?

An interaction like this should not be looked at in isolation. Chances are, the desired effect has already come up in a discussion:

...and when you hover over the button it will be highlighted...

Lighter/darker are not your only options either - in many cases I find it appropriate to have the buttons more saturated on hover (which is an easy choice - if it's interactive, you know not to de-saturate the button!)

This would work well for your scenario (i.e. bright on hover), but you may want to tune the other rendered state as well. It's so pale it almost looks disabled!

I think it also depends on the background. Lighter color on darker background and vice versa and then when someone mouses over they must have already seen it so you can lighten it if it was dark or darken it when it was light.

Atleast that is what I'd find logical to do with buttons. That is if it is a button that you really want to draw attention. Otherwise I would choose for brighter not lighter on hover because this is what I'm used to from working on a windows computer.

Not the answer you're looking for? Browse other questions tagged website-design gui-design buttons hover states or ask your own question.

1
Should buttons be illuminated, or darkened, upon hover?

6
Shading buttons darker than the normal state vs. highlighting
36
Why this timed-hover "like button"?
6
showing buttons on hover?
5
HTML button Hover effect standards, principles or best practices
2
Should button icons enlarge on hover?
2
When do hover animations become a distraction to users?
3
What should the hover state of an outline button look like?
1
Allowing both hover and select state on a section / component
1
Dark theme navbar: Lighter or darker than the main background?
2
Subtle Hover Design Ideas