This is something that has bothered me a lot on how to approach.

I like to use "ugly data" in my wireframes since my goal isn't to have pretty wireframes, but functional ones. Using simple single-line words is easy and pretty, but it's not real.

Here are some ways I can think of to handle longer text in a preview before selecting an item: 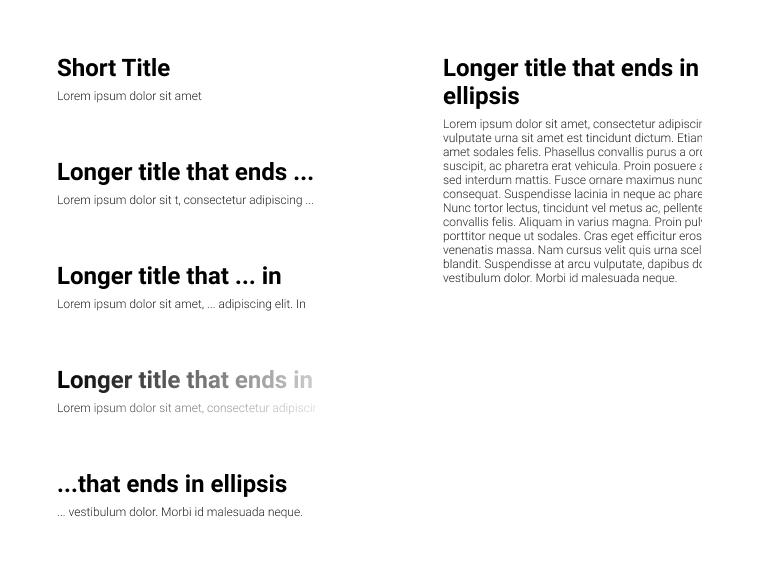 But then what if you have a nefarious user who exploits Unicode to overflow these fields? 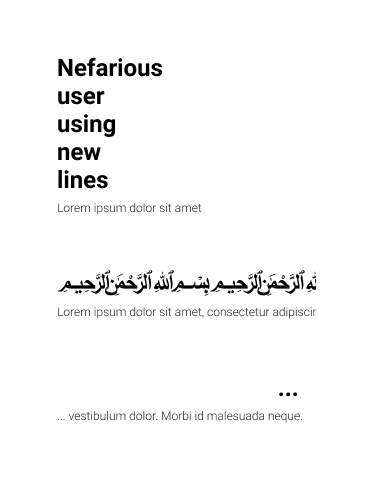 The first example is the user using either   or   to create new lines, making a simple character count inaccurate.

The second example is the user using a long Unicode character ﷽ to abuse a character counting method.

The third example is using a whitespace rendering character ㅤ to create an ellipsis out of seemingly nowhere.

You'd need to somehow not only measure the width of a piece of text, but also make sure it doesn't flow vertically. Or sanitize inputs so this doesn't happen in the first place. But these precautions aren't always technically feasible.

In addition, you need to display the full text somewhere anyways, and it starts getting ridiculous with the longer Unicode characters. As an example, longer title that ends in an ellipsis is 37 characters, below is an example of a 20 character string, if you were to use newlines it would only take 17 characters to completely overflow the screen at that font size. 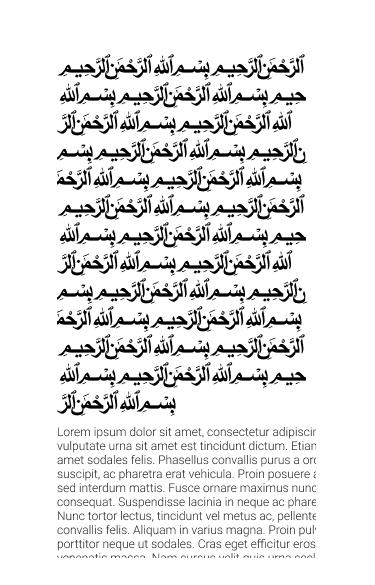 With all that in mind, how would you handle this? Do you scroll-overflow the text after a certain height? What if it's composed of newlines? Do you decrease font size?

I've been told that it doesn't matter because it would be ridiculous to have a user input such long text. I don't like this response since it does and will happen, and it should be my task to figure out the best way to display these edge-cases.

While I do applaud you for using wireframes to effectively explore different scenarios and test edge cases, I don't think you should be trying to solve this problem in a silo as it is the job of the UX designer to advocate for the user's point of view in various requirements and design considerations as part of a bigger product team.

To answer the question, if you can understand the various motivations why a user would want to type in more text than you can comfortably display in a line of text, the best course of action for resolving this issue will hopefully become more apparent.

But the exact combination of design strategies may depend on other factors, which is why a better understanding of the users and the context of usage within the team will help guide you to the right approach.

Not the answer you're looking for? Browse other questions tagged mobile text overflow or ask your own question.

2
Change all to accommodate one?
8
Elegantly display dynamic text in a fixed width & height area
18
Slanted cursor+background for italic text?
2
How to create a fun breakpoints while reading long texts in mobile
4
Navigation on side – dealing with link lengths – different font sizes?
1
Custom Type and Mobile Optimized layout for Email Clients
50
Is it bad practice to use "Lorem Ipsum" example text in a text-preferences screen?
2
Mobile proof input control for long list of options with a lot of text
0
Truncating or not pasting a string when pasting it in a text field with max character shorter than string length?
8
Typography design for multi-language supported app