How do I make my fill-in-the-blank exercise more obvious?

I developed an app for learning Chinese that requires the user to do fill-in-the-blank exercises. A word in the sentence will be blank, and the user has to select which options is correct. It looks like this: 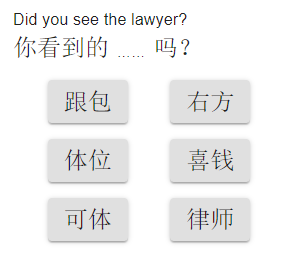 Users seem to be able to understand what they are supposed to do there. However, some users are confused by exercises like this one:

They don't notice that the character for "two" is already present and that the blank should be filled with "twenty". Instead, they look for a button that has "twenty two" and are confused when they can't find it.

Is there a better way to present the exercise to make it more clear that they need to fill in the blank, rather than find the translation of "twenty two"?

You could suggest a shape that matches the choices below, and use a color to suggest interactivity.

Then, to match that, make a hover state that matches the area above:

Another slight option is to treat it like a drop area, and just have the space, but no ellipses:

Instead of giving the character for ‘two’ as part of the question, could you include it next to (or as part of) each answer?

That would take a little more screen space, but seems far clearer than the other alternatives, with less opportunity for confusion or misinterpretation, even for people not giving it their full attention.

Perhaps by keeping the blank spaces the same size as the answer, including any kerning issues?

That way, were the answer moved into place everything would line up identically as when it's fully typed out.

With Chinese especially, there's a lot of learning how characters relate to each other, and, at least for me, much of that study has been spatial as much as memorization of individual characters. Because it is a pseudo-pictorial language, it is far more visual than many other written languages; I know, that sounds strange, but think of how some dyslexic children are taught to read. They take, say, the word cat, and make it into a cat by drawing it out... so they learn the full and empty space and shape/outline of the entire word rather than just the symbols. At least for me studying Chinese, that approach helped a lot more than whatever it was I used to learn phonetic English reading as a child. So for 22, if they have half the image, they may be more likely to fill it in properly if all of the parts line up more like a puzzle than a section of text.

Another option would be, upon mouseover, a preview of the selection showing in the empty space.

Not the answer you're looking for? Browse other questions tagged usability affordance learning or ask your own question.

4
Making a linked page more obvious?
11
How can I make the purpose of a complex user interface element more obvious?
5
Teaching SMS sending procedure in mobile
4
How to make mass mutation intuitive?
3
Preserve Settings When a Feature is Disabled
2
How could I make this sheet more intuitive?
0
Best “click here” approach: glow or arrow
8
Multiple selection