User feelings when enjoyment is not a priority

Our human factors team are used to dealing with a userbase where their tool choice is mandated and training compulsory. Imagine a military context where the user is pressing a button to fire a cannon on a tank.

They would argue that the 'desirability' of a system plays no role in this context.

Most UX materials I've found are focused of the commercial domain and the desirability is easy to justify but I'm finding it hard given the context.

Based on the priority of design requirements, safety and usability will surely rank above desirability in these cases where a choice is not available. Desirability is another way to differentiate products in the market (Kano's Model). But unfortunately, there are no products to compete in these cases so desirability plays very little role. That being said, a good experience is always sought forward to. But instead of happiness, productivity will be the main criterion perhaps, which will be brought forward by reducing cognitive load with simpler layout and easily reachable controls. For a pilot, more than happiness, easily discoverable controls and readily available information will be more important.

I'd say that desirability does play a role in this context. Desirability, though, isn't just about fun and delight. In your context I'd say it's more about the system providing accurate feedback about the system's status.

Once I push the button I need to know that the cannon has fired. There might be a big boom, but the system needs to say that the firing was successful. Did it fire properly? Did it hit anything? Is the system in a state now where I can fire again?

Those are, I imagine, some of the things a user would desire (and need) in this case. Our jobs as UX Designers is to discover what desirability means in your context and design it into the system.

This actually got covered in a university course on Human Factors Engineering (by Dr. Lewis Chuang, to give credit). The basic premise was this: 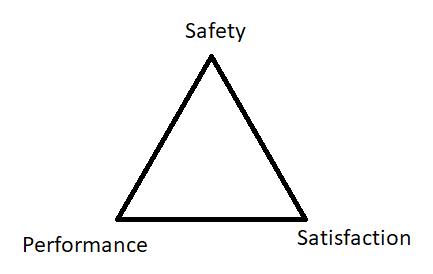 Each HF system can be represented using this triangle. It's form then shifts according to the restrictions, needs, etc. of the situation (much like a radar chart).
E.g. a system designed for the work place has a longer side on the performance part (productivity being more important), while safety and satisfaction only get as long as the restrictions like budget allow.

So in a safety-critical system, it would look something like that: 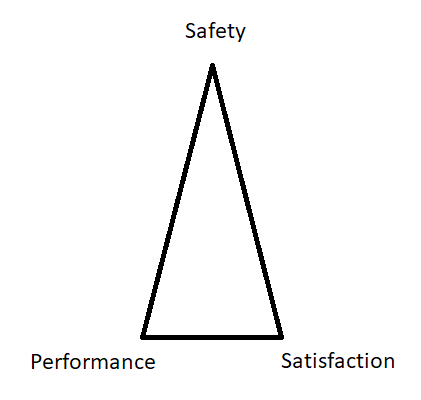 The restrictions of the environment inevitably take away the room for performance and especially satisfaction (imagine having multiple different security protocols you have to go through in a nuclear plant for example, which block productivity but ensures safety). The satisfaction of the user here simply can not be equally important as it would be for a product like a mobile phone, where it is the dominating factor.

Answer to your Question

One would have to argue that it is not possible to justify equality in this case.

But in my opinion there is an objection to make here. Simply because it is not the dominant factor, it does not mean that satisfaction of the user can be completely ignored. It does happen a lot in such cases, though, but that is simply lazy and bad design.
It is bad because it puts the so highly valued safety at risk by numbing the user down to such a level, that he is operating the system on a zombie level of mental activity. That means always pressing the same 7 buttons in the same order, just to activate some standard protocol. So when something happens that is not standard, the user is thrown off and is at high risk of performing a panic reaction, simply because he is not used to using his brain with this system due to prior mind-numbing.

So, a good design would push the satisfaction boundaries as far as acceptable, to make even a critical system at least slightly enjoyable to use and to ensure the presence of the user's mental awareness.

11
What is the difference between human factors and UX design?

7
Protecting the user experience with business cases.
5
Benefits of recording user facial expressions when testing
6
Providing warm colors when the content is depressing?
34
How do you make users vote objectively and not from emotions?
68
Handling the death of a user
6
Creating an emotional bond with the user on a business site
0
Implications and knock on effects of late scheduled emails to the user experience?
2
Should I show the user how many views its content has received?
3
How to deny the usage of my product to a user?