Inventory - how to add range of items and reduce the probability of human error?

Problem: I have an inventory that fills one purpose -> insert the same type of item (dongles) which only varies it's serial number. Every month someone buys a box which comes with a perfect range of numbers. 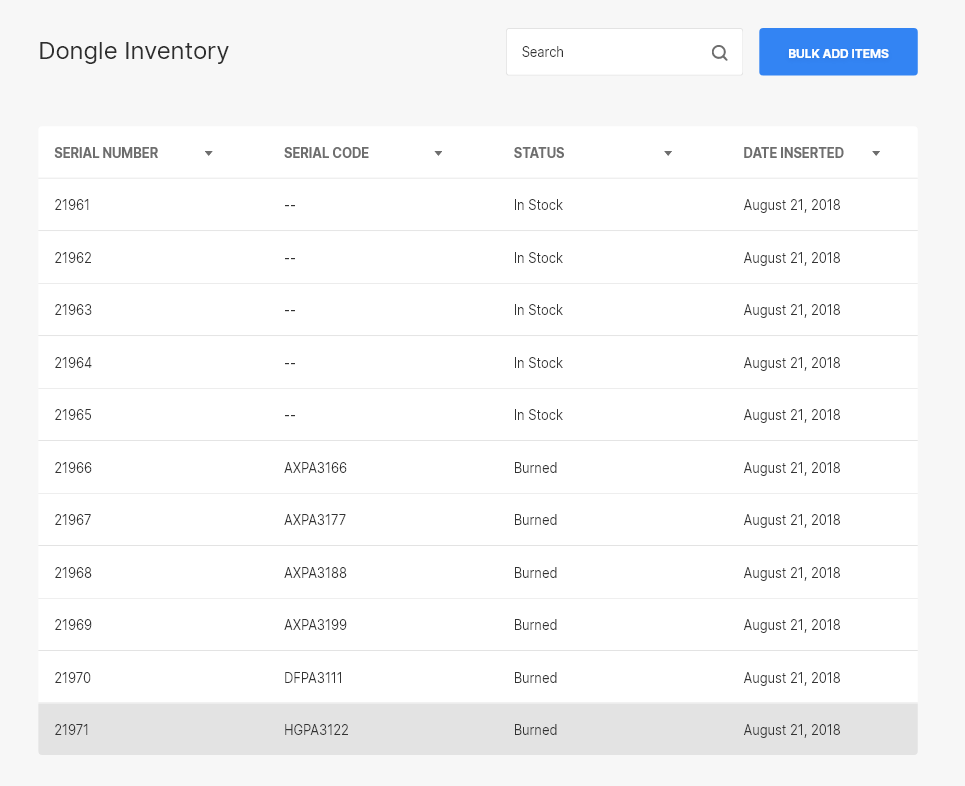 My dev is reluctant to add any type of editing to prevent human error for two reasons:

1-it's done 4 times a year 2-if someone has ability to delete the record it will mess up with a reference, and by doing that there is no reference, unless it's build a history (more work) 3-the project is too big and we need to ship

I don't agree with him because users including highly trained ones makes input mistakes. We are using a Jquery library for editing which is not a big deal to activate (I can do it myself) but it involves cost with testing and backend.

This is what I came up with but I still think that this is not ideal: 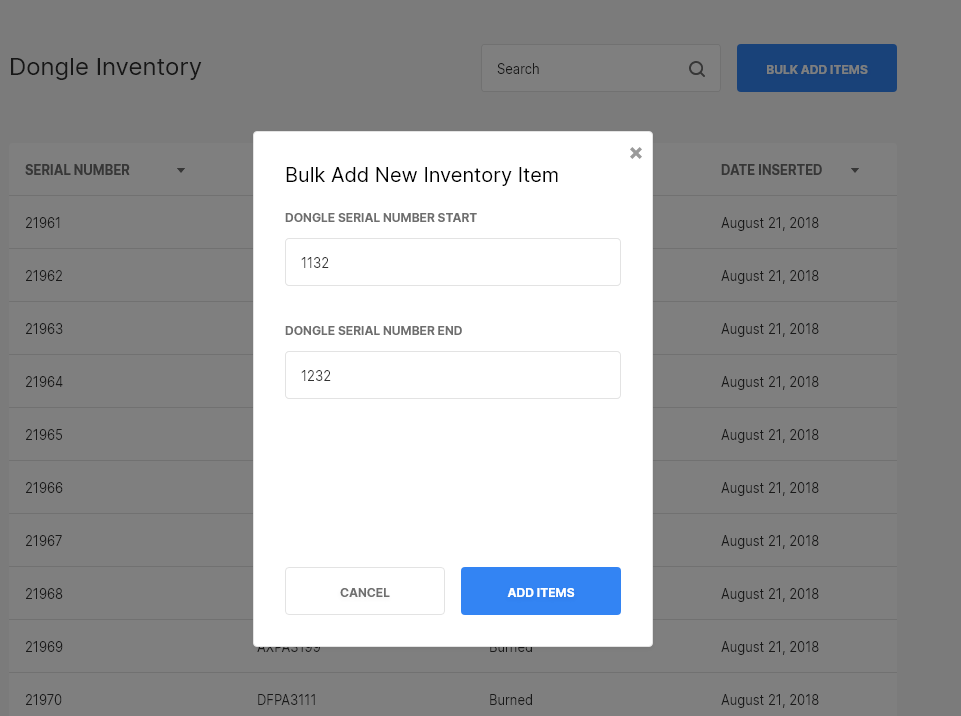 Right now I have this popup to insert:

What would be the best approach (cheap cost) to reduce human error input in this case?

Note: the status is changed dynamically based on when the dongle is activated. The purpose of the inventory is to record it's first entry before it's sold to final customer and track if it was stolen or lost.

The question is not if the ability to correct an erroneous bulk add is needed, but how will it be handled when it happens.

The answer partially depends on who the end users are and how much access you will have later.

If this program is designed to be used in-house (or you are hosting it for a customer and retain full admin access), then a temporary solution until you have time to develop proper edit functionality would be to create a unique identifier for every bulk add operation and save that ID with every dongle database record that is created by that specific bulk add. That way when a mistake happens, you can undo that bulk add operation by deleting every dongle with the matching ID from the database (and then start over with a new bulk add).

As for the UI, you might want to present a separate confirmation alert after you press the "Add Items" button. That alert could say something like "Please verify serial numbers 1132 through 1232 match the case", the user should also have to wait a few seconds before they are allowed to click the confirm button.

Normally such a thorough confirmation procedure would provide a poor user experience, however weighing the effort required to fix a mistake and the fact that the bulk add operation only happens once every 3 months, in this case the few extra seconds appear to be worth it.

It's a bit difficult to make solid recommendations without knowing more about how your users will capture the numbers: do they have to manually check numbers on the dongles, or are these printed on a label on the box, etc.?

Be sure that you talk to some users to understand how they currently capture those numbers, and how they confirm that they've entered the right ones. This should help you tailor the process to their habits and expectations.

As general recommendations, handling any larger physical items usually means that users are a bit farther away from the screen than if they're in an office desk setting. Consequently, using default size text may make the numbers difficult to read at a distance.

Hence, make the input field text larger so that your users can easily read the digits they enter. You could even test using separate input fields for each digit, similar to those on the unlock screen on mobile devices, as this makes it easier to visually grasp each individual digit.

I agree with Barnyard that, in this particular case, a confirmation dialog may be a good thing (despite the true "users don't read" adage…).

Instead of disabling the Confirm button for a while, which I'd personally find quite annoying, here's a slightly different idea that you could test.

When the user clicks Add Items, take them to another screen that displays both numbers, and require them to click a checkbox-style button next to each of these two numbers to effectively confirm that they double-checked them vs. what's on/in the box. Only when both numbers are marked "double-checked" does the Confirm button become enabled.

A dialog is not needed. Instead, provide a context menu with 3 items:

This presumes that the numbers are sorted.

Results: Users will do less errors, because they don't need to enter any numbers. And your developer will be happy, because he doesn't need to validate numbers. Small validation is needed: end element should not be before the begin element.

Not the answer you're looking for? Browse other questions tagged gui-design design-patterns or ask your own question.

6
How to let the user add and edit items in a ComboBox? (WinForms)
2
How to add a number of items in to a “new category” or an “existent category”
1
What are the alternatives to dragging items to add to data view?
13
How do you reduce the number of emails users send you?
4
Input of sequential data
2
How to have both Search and Add options?
5
How to add one or more items to the table row?
0
How to reduce ambiguity between the use of 'Remove' and 'Delete'?
2
SSO registration different ways to ask for account name
0
Where is the most conventional/best place to add actions for items inside datatable?