Are tabs and/or steps in a wizard displayed as separate boxes in a sitemap diagram?

I'm creating a sitemap for an enterprise application.

For one section in the application, there is an edit calendar feature. Once clicked on, there are three sections/or different types of calendars to set up.

We currently use a step wizard to edit the calendar so the user has to set up the dates in that order.

In my sitemap, do I draw out each step as a separate box, or would that go in a separate user flow diagram? 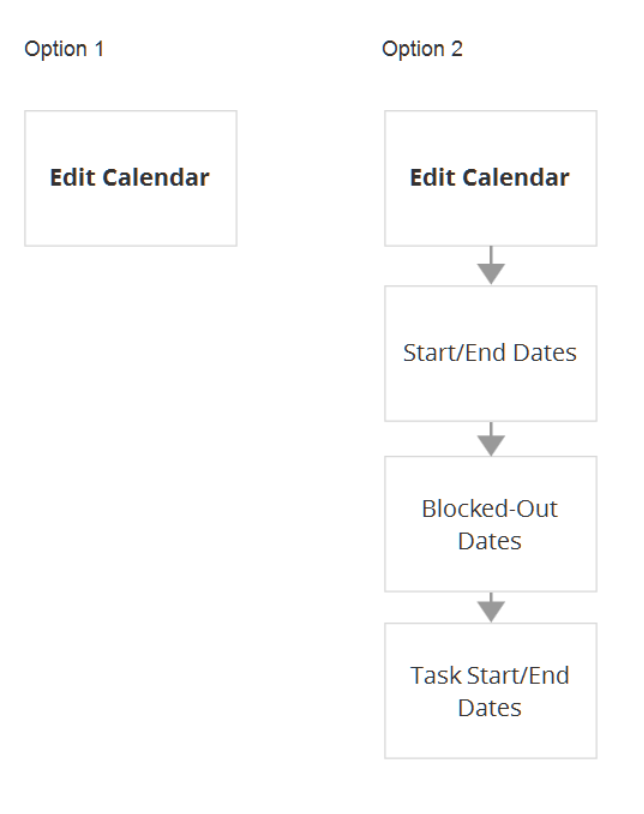 What are diagrams for?

Diagrams are graphical means to communicate concepts and ideas. So long a diagram clearly conveys its intended meaning - it's job done.

There is usually an inverse proportion between how much you put in and clarity; in that the more you include the less clear the whole thing becomes.

Where the Mona Lisa is just plain pretty, the visuals in a diagram are just proxies to some semantics. For example, a rectangle denotes a page, a directional line denotes a dependency, and so on.

You can overload a diagram both ways:

One of the most common classification of diagrams is:

A sitemap is in principle a static diagram - it shows the structure of your site, in what is typically a tree layout. That structure doesn't change over time, nor meant to convey dynamic (over time) aspects of the site.

A flow diagram is a dynamic diagram, it shows how users navigate progress through a process over time.

Worth noting that there are hybrids, but mostly in the form of dynamic diagrams where boundaries denote parents (a 2 level deep structure).

Things to watch for

It is somewhat surprising to see a box titled Edit Calendar in a site map. Editing is interactive and should be part of dynamic modelling. A Calendar page seems more fitting for a sitemap.

In option two, there are directional arrows (again, a thing you'll normally see in a dynamic diagram). Given it's for a sitemap, I assume there will also be non-directional connections? If so, then consider that readers need to infer what these two types mean, which is an example of potential overloading.

Consider what exactly are you trying to communicate. If it's a sitemap in the traditional sense, it shouldn't include Edit nor flow semantic.

A sitemap shows the different pages in a website or web app. In the case of SPAs, the sitemap should show the different sections. In your case, under"Edit Calender", there is a wizard that has 3 steps that are in a linear order. Steps in a workflow are not shown in a sitemap. You can break the steps into a workflow diagram and just have an annotation in the Edit Calendar box. The sitemap functions as an index that shows the overall scheme of the app and its different sections.

If this is for developers then every interaction should be noted: from tabs to modals to revealed divs to links to hover interactions. And if there are different interactions between desktop and mobile or different break-points then these differences absolutely need to be documented. It should refer to functional flows and use case documents / Jiras, etc...

This is time-consuming so lots of places only do a perfunctory job of it.

The sitemap should be organized in a way that best allows your users to find the information. The sitemap is not a document for developers it's for your end users, who presumably are not in the web development business.

As for example, the sitemap shows that there is a calendar feature. You may have a div that displays detailed information about what this calendar feature does but that level of detail should, most likely, not be front-and-center.

Not the answer you're looking for? Browse other questions tagged information-architecture sitemap or ask your own question.