What kind of chart is this?

This is not a donut chart.. not showing distribution here. These are different attributes contributing to the total score (in the middle) 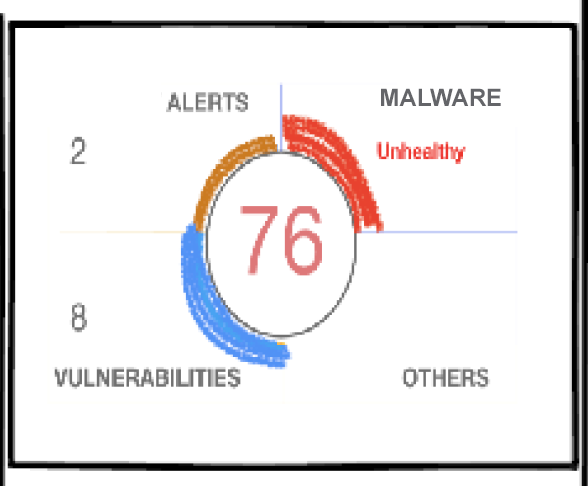 The thickness of the wedge is proportionate to the severity of the alert type.

Is there any other chart that works well for this type of data?

Since the attributes are not distribution, you could show the initial score, and place a severity breakdown below. Allow hovertips and details for drilldown.

Instead of focusing on the current chart (the implementation, or 'how'), maybe we can address the possible questions in the users mind (the problem space).

Here's a first sketch to prompt a discussion. I'll update my initial answer as needed.

For a severity level, it appears that some attributes can have a higher count, but still have a lower severity level. Is that correct? 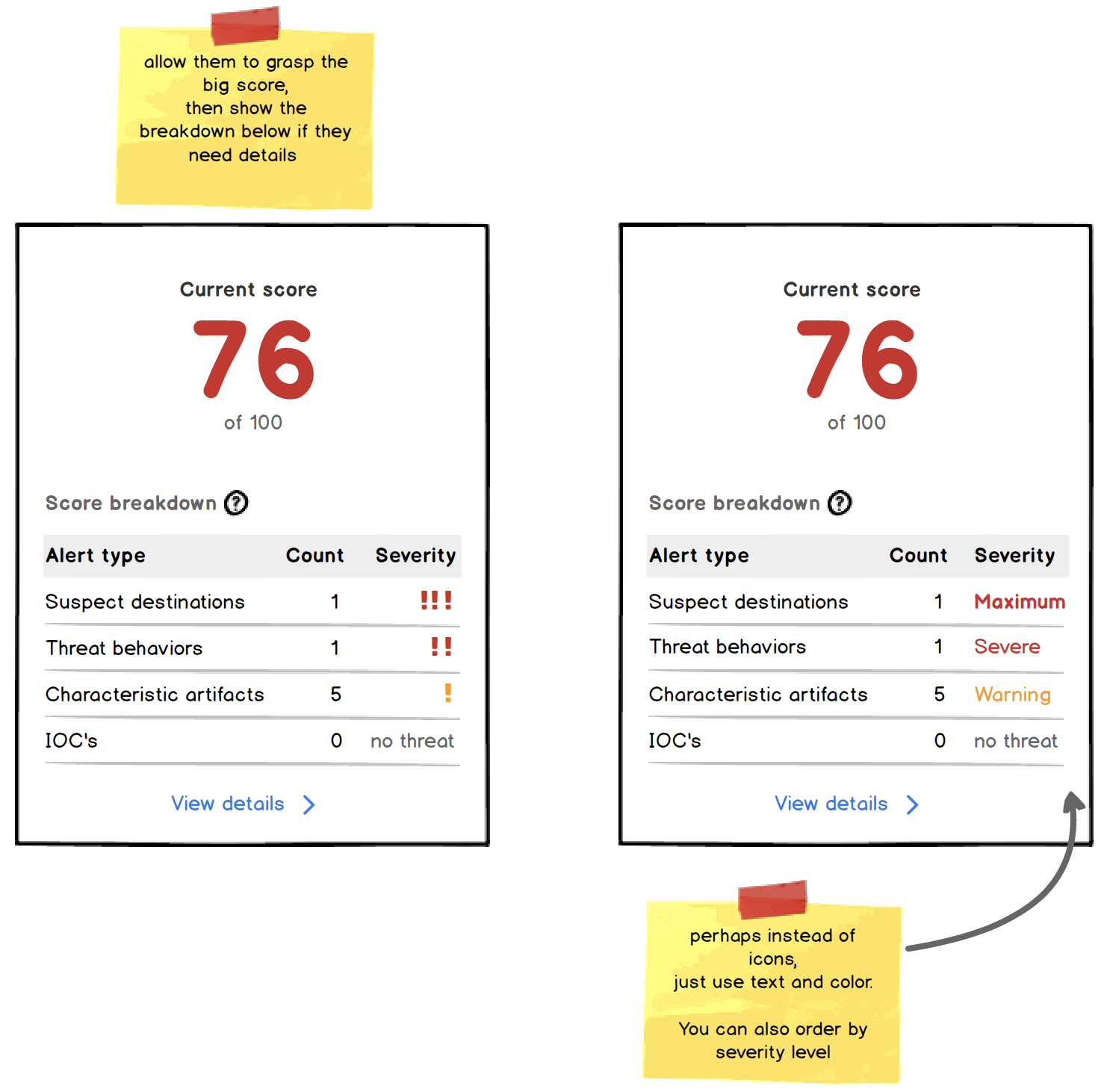 A tabular breakdown might seem less 'visual', but with a limited amount of attributes, you can order by severity, and show a decent amount of information in a relatively small space.

And unlike a polar chart, the labels aren't spaced out too far, so your eyes don't need to move much to take in all the attributes, their counts, and severity level.

If so, you could have a column that measures the severity, with a 'no threat' for attributes that are 'in the clear'.

The difficult part could be in making a universal Severity scale, not necessarily tied to the count.

The most approximate chart to the provided images is a Donut Chart. Refer to this link about how to use donut charts.

Topologically, it looks the same as a Spider chart with 4 variables, but each variable is displayed as a quarter-circle instead of a point. 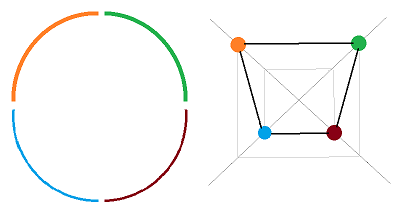 That looks like a form of polar area diagram.

Also known as a ‘rose diagram’, this is almost 200 years old, and was popularised by Florence Nightingale to highlight death rates in different months: 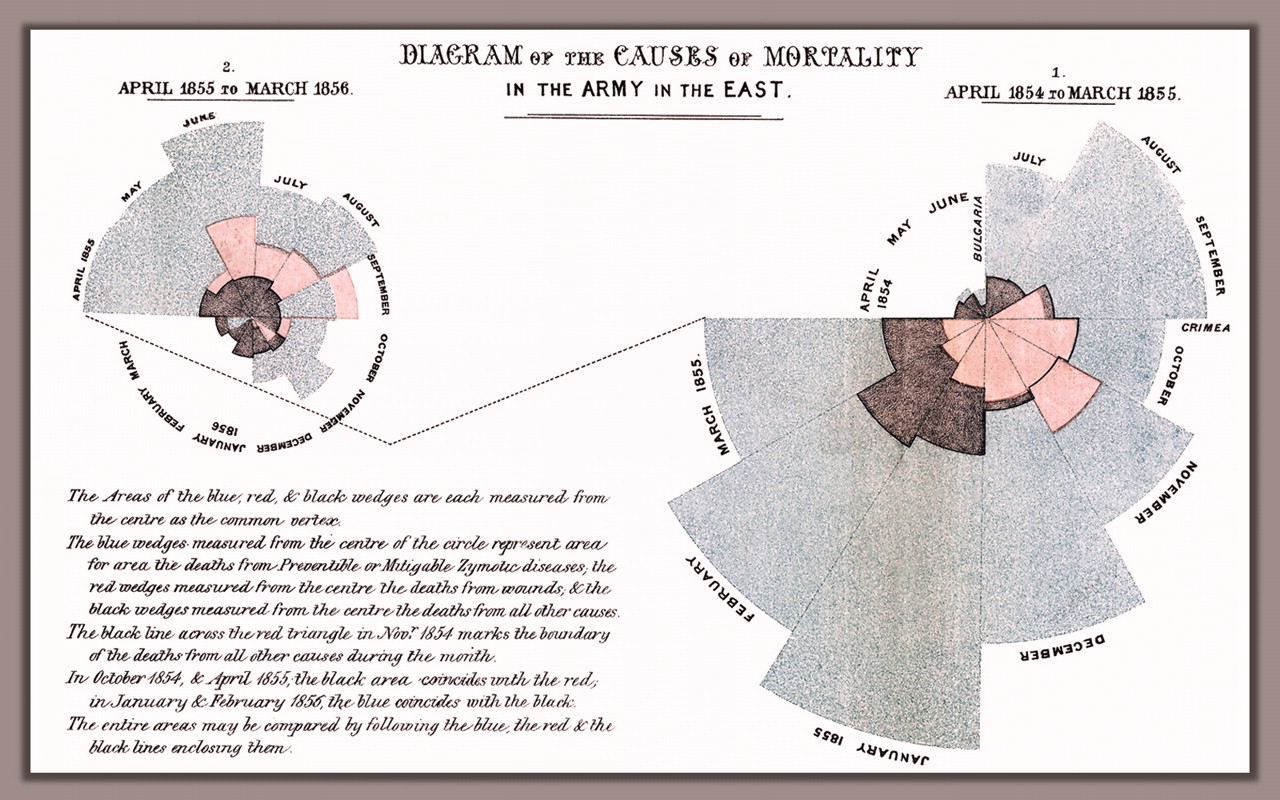 It's most often used with sequential data, often larger sets, but I found this example with 4 separate values: 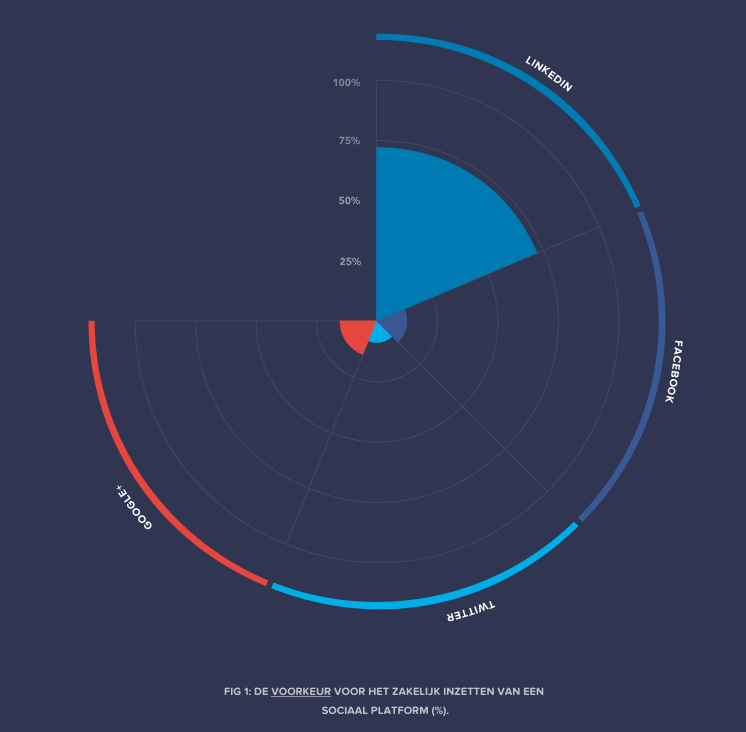 That doesn't use the full circle, and isn't annular (with a hole in the centre) like the chart shown in the question.  But I don't think those are very important.

Personally, I don't like the lack of proportionality in the areas, nor the use of a sequential chart for isolated values, nor the difficulty of comparing non-adjacent values.  So I'd probably suggest something more like a bar chart in this case.

But there's ample precedent (some of it historically important) for this sort of diagram!

It looks like a 2x2 matrix diagram combined with a donut chart in the center that shows the total count. A bar chart or heatmap table would be a better form of communicating the relationship between the numbers, e.g: 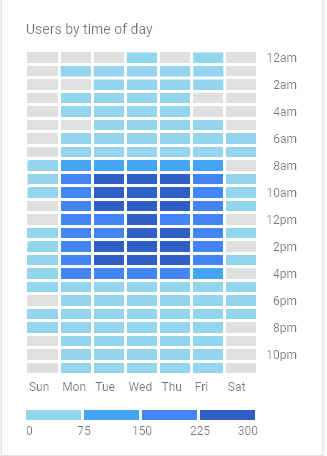 Not the answer you're looking for? Browse other questions tagged data charts or ask your own question.

5
Report page with data table and chart
5
Alternate to gantt chart
3
Tooltips on a tiered donut chart - what to display?
2
Word to describe adding an independent variable to a chart
1
Donut chart colours for success/warnings/errors
1
Displaying course data with 90+ values
2
Highlight individual datapoints in histogram bin
2
How can I improve the legend in this line chart with value, norm and prediction?
2
Best way to present multiple types of data in a cluster bar chart?