Is this cancel button needed?

In this UI it is possible to type in text in an input box, press Enter and the text would get converted into a tag visually (and in JSON). After the tag is typed, the cursor would be ready for the user to type up a new tag, etc.

Think simple tags input UI's, like on any StackExchange Ask a Question UI.

The problem arose when someone mentioned they were not sure if they needed to press Enter or Space bar or anything else on the keyboard. So naturally we decided to add on-screen floating with cursor buttons - OK (same as Enter) and 'X' (removes the whole typed text up until the first previous tag). So the buttons move to the left with the cursor. Have a look at the screenshot.

Someone in the team raised a question of whether the 'X' button is even needed. They said:

Couldn't the user just backspace it?

What are your thoughts? Is there a need for this 'X' button? Would it make it easier? Or would it only make user use their mouse more instead of just backspacing?

It's not my words but NNGroup's:

Simplicity Wins over Abundance of Choice

Adding features that have little to no value to most users undermines people’s innate abilities to collect and process information efficiently.

I would strongly suggest solutions like the following for this situation. A simple Hint + Button named "Enter/Return" which will cater to both the problems. 1. People get informed to click the "Enter" key. 2. It should be designed in such a way that it feels like a button.

So we avoid all confusions and complex user paths & train of thoughts. 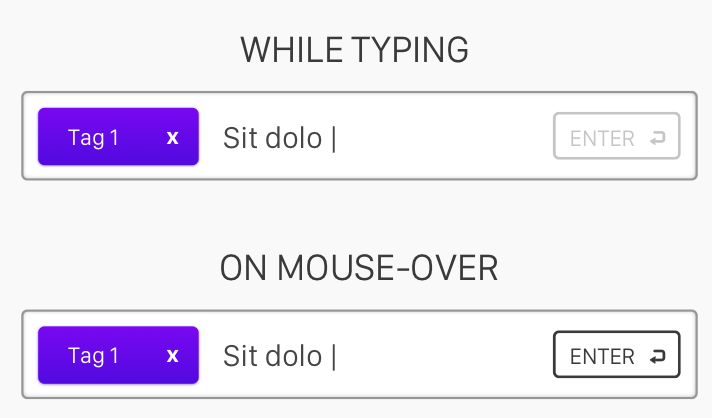 It isn't obvious to me that the red X button will only delete current input. What seems more obvious to me is that that button will remove all inputs including boxed ones, since to me it belongs to the entire text field and not just to the text being inputted.

I agree with your colleague — do away with the X button.

On the yes button, I suggest adding a tooltip to be shown when the user hovers a button, with the text "you can also press Enter", for instance.

Not the answer you're looking for? Browse other questions tagged buttons input-fields confirmation tags cancel or ask your own question.

6
Should the results of a calculation happen automatically, or require a button push?
6
List autocomplete delete/edit behaviour
3
Is it a good idea to show a warning to users who are typing tags incorrectly?
0
Forced input restrictions
2
Reset button for calculator forms
7
Should tags be inside or outside the input field
2
Lots of buttons with user input if none are applicable
4
Form input to accept array of strings
0
Include ANY, ALL, or NOT options with tag searches
0
Is there a name for a text input that lets a user input multiple values?