What's the purpose of this flashlight-like effect in windows callendar?

Is there any specific reason for windows callendar to have this flashlight-like hover effect? 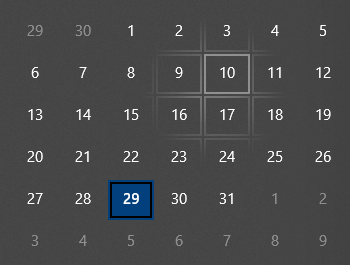 If anything it seems to me to be distracting by spreading the area of your current mouse position. Is it suppoused to have any benefits over a single box hover, or is it purely decorational?

This effect was made as part of the Microsoft's new design system called Fluent Design.

There are 5 principles to it:

Light: Light controls how user interface interacts with illumination and how it helps the users to avoid distraction.

Depth: Depth brings parallax effect and makes use of layering. This highlights the relationship between objects and elements.

Motion: Motion can be used to show connection, relation, and context between elements and objects.

Material: Material allows to control an element’s texture and change as one interacts with it.

Scale: Scale lets elements and objects to go beyond two dimensions and adapt themselves according to the size of a screen.

In the demo video for the Fluent design they demo that flashlight effect as part of the 'Light' principle - controlling UI depending of the angle and movement of the pointer.

While, personally, I have no attachment to this sort of effect and it provided no usability perks to me or anyone I know in UX fields, it does look snazzy; and it's simply part of Microsoft's Design system.

PS: I do not work for Microsoft nor have any connections with any employees to conduct any further research or ask questions.

PPS: a fun little link to a similar effect: https://codepen.io/gubb/pen/PdZqKy It works much better with lighter colours for me. Makes more of a contrast with highlighted spotlight vs those around it ('negative space effect almost').

Not the answer you're looking for? Browse other questions tagged windows-os hover or ask your own question.

8
Change text color when hovering over hyperlink
3
Hover for More Info on a data grid
7
Should filtering of data have an effect on the filter criteria as well?
3
Standards or examples of graphically combining hover and sorting, in a column header?
3
Why don't most forms have a hover state?
1
Is 'single click to select' list item wrong if its only used to show position?
4
Name this widget: mouseover extends text that doesn't fit in its table cell
10
Mouse wheel interaction with nested scrollbars
2
Hidden actions - Hover effect in the list of items