What visual cues can convey the sense of direction?

In a series of tests, participants were exposed to visualizations that show how items are transferred to various recipients.

The purpose of the image is to answer the following questions:

The interface provides the information in tabular form, where users can search and sort the entries. However, it can get difficult when tables have many rows.

The receivers are companies, but they cannot necessarily be recognized as such; some names could be obscure players, unlike "Microsoft" or "Sony" that most would identify easily.

The visualizations are Sankey diagrams, meant to give a quick estimate about the data set. Here are some examples of what participants saw: 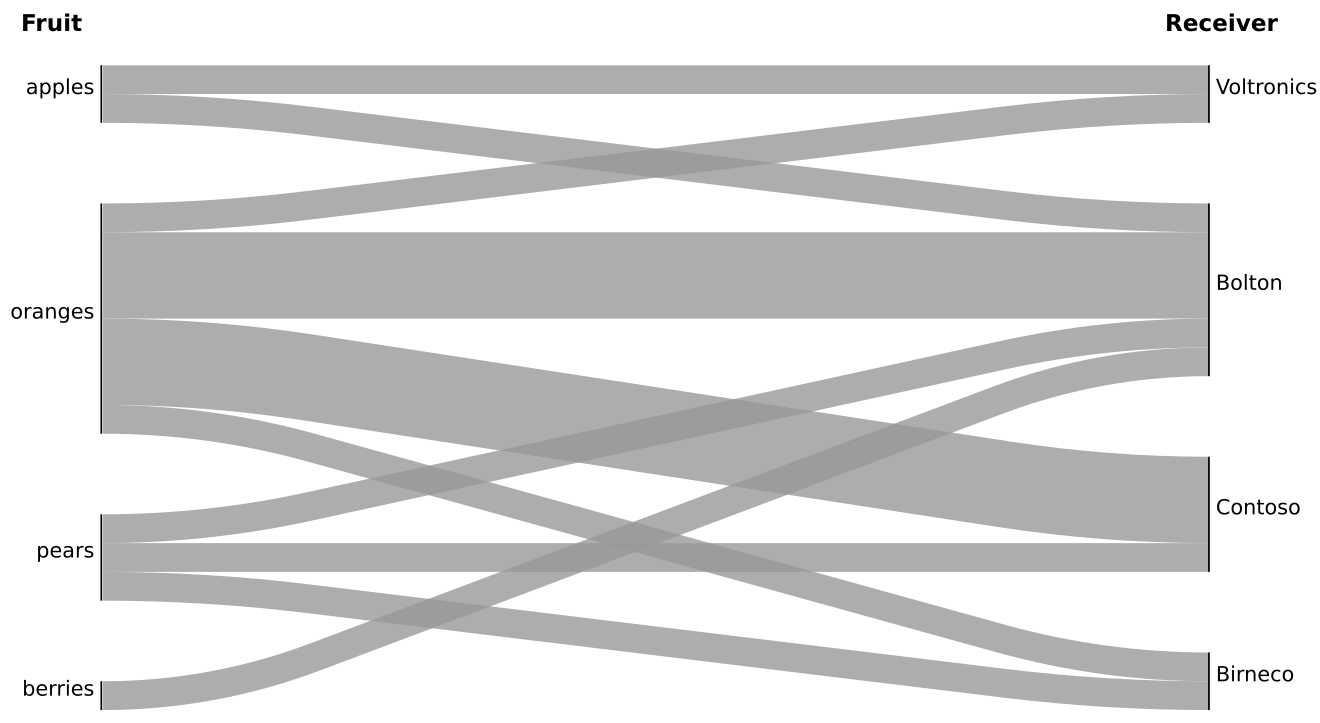 As above, but with the addition of an intermediate point - the purpose of transfer: 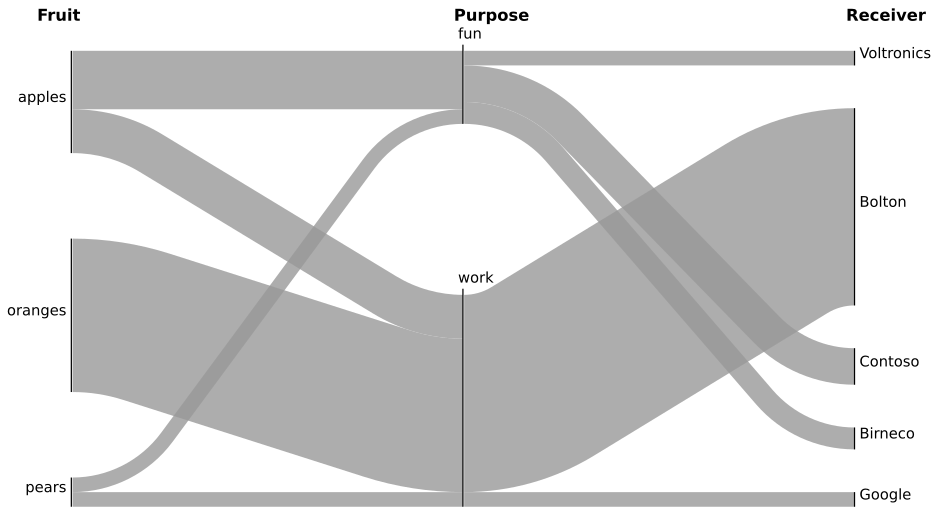 As above, but with the use of colour as a second way to differentiate item types: 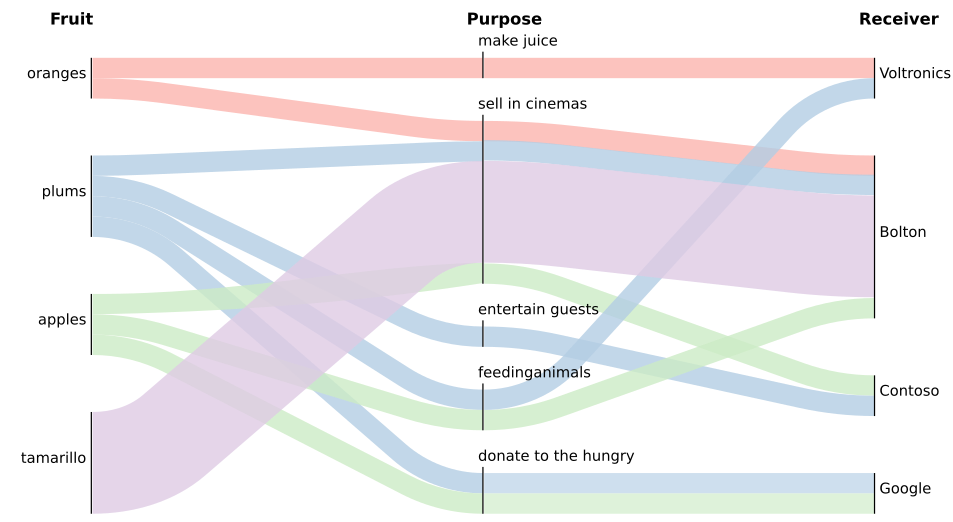 My observations show that interpreting the image was easier when you have just the item type and the receiver, but the presence of the intermediate point would puzzle some participants.

In the tests some participants would use their finger to trace it, e.g., in the last image they'd touch the bottom entry and say "Tamarillos are given for the purpose of selling in cinemas, to the company Bolton" or "Tamarillos are given to Bolton to sell in cinemas". These are correct interpretations, and I am looking for a way to nudge others towards tracing the curves with their finger, or following them visually.

What was tried so far:

However, both these methods add more content (text, or take time to watch the video). Perhaps there are some "passive" approaches - textures, gradients? Subtle animations?

info-visualisation information-design sankey
Share
Improve this question
edited May 14, 2019 at 21:45

Show them, similar to a process step thru.

Most people don't read, so rather than explicit text, join each step with an arrow.

Here's an example below. You may need to emphasize more, but putting it at the top of the chart shows the left to right flow: 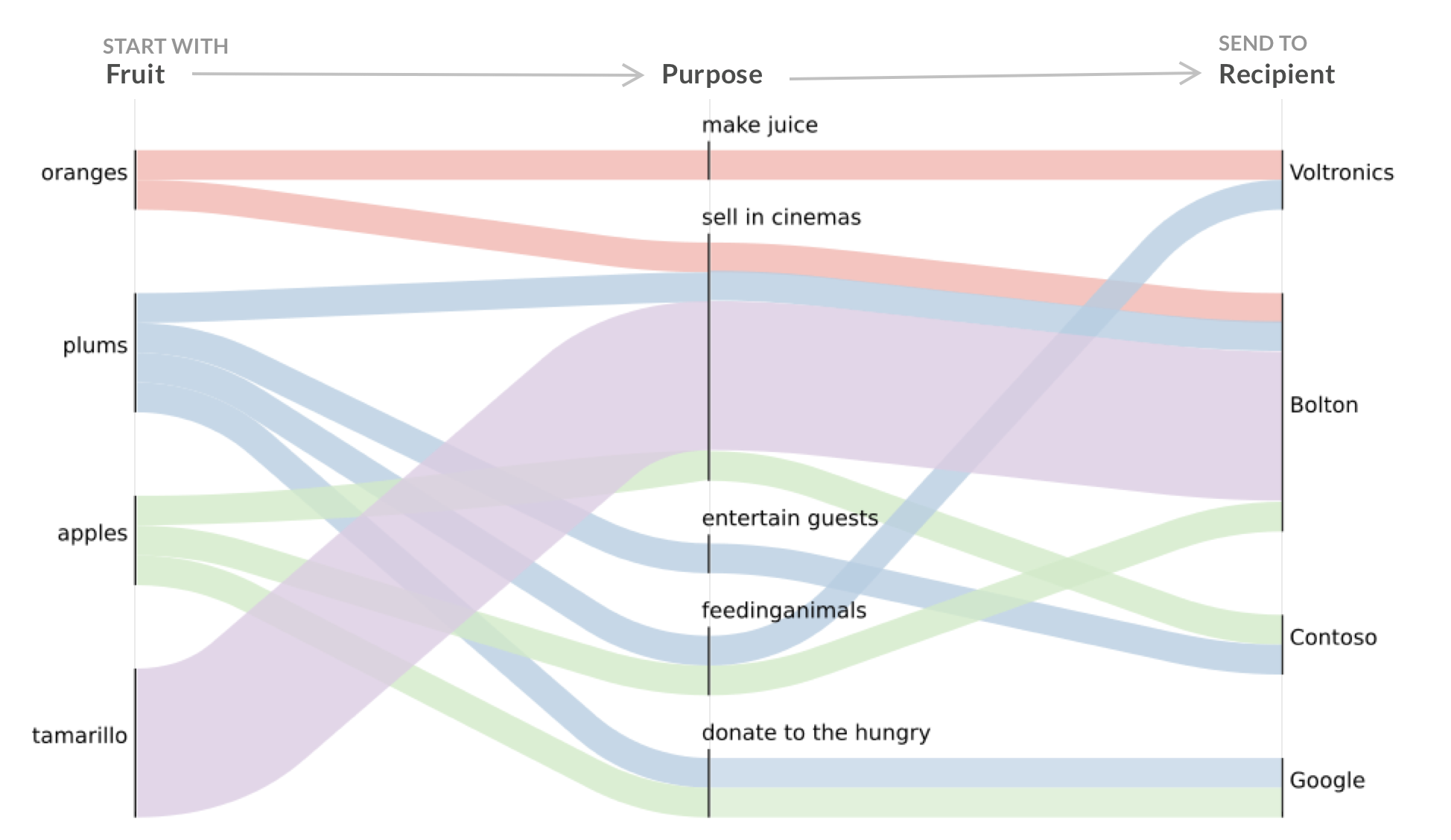 You could also label the first and last columns with a subheader, and to answer the question 'who receives the most?' you can show totals for the company: 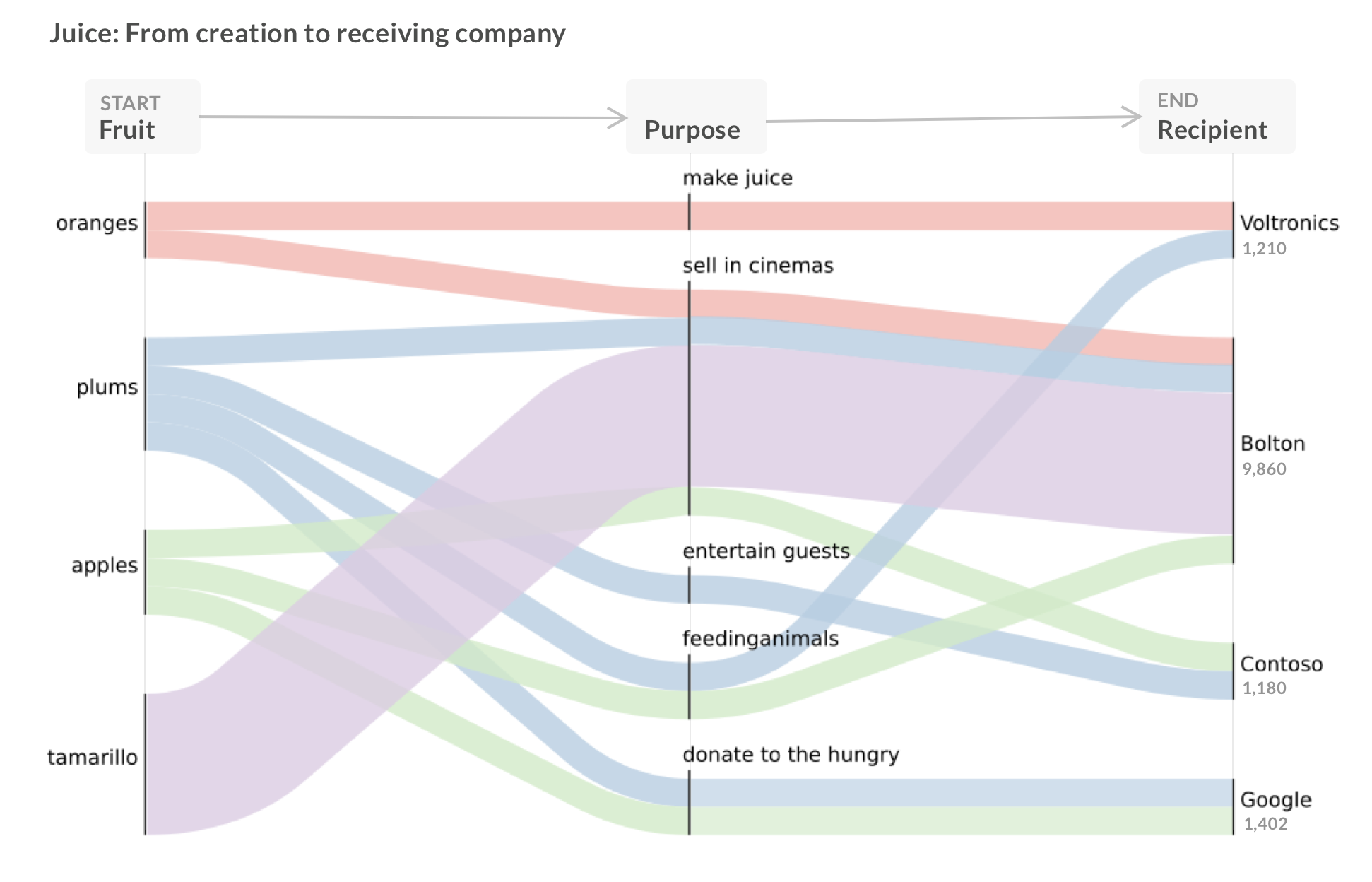 You can also test with an option for all totals, so they can see the numbers. It may increase the noise, but give clarity by being explicit: 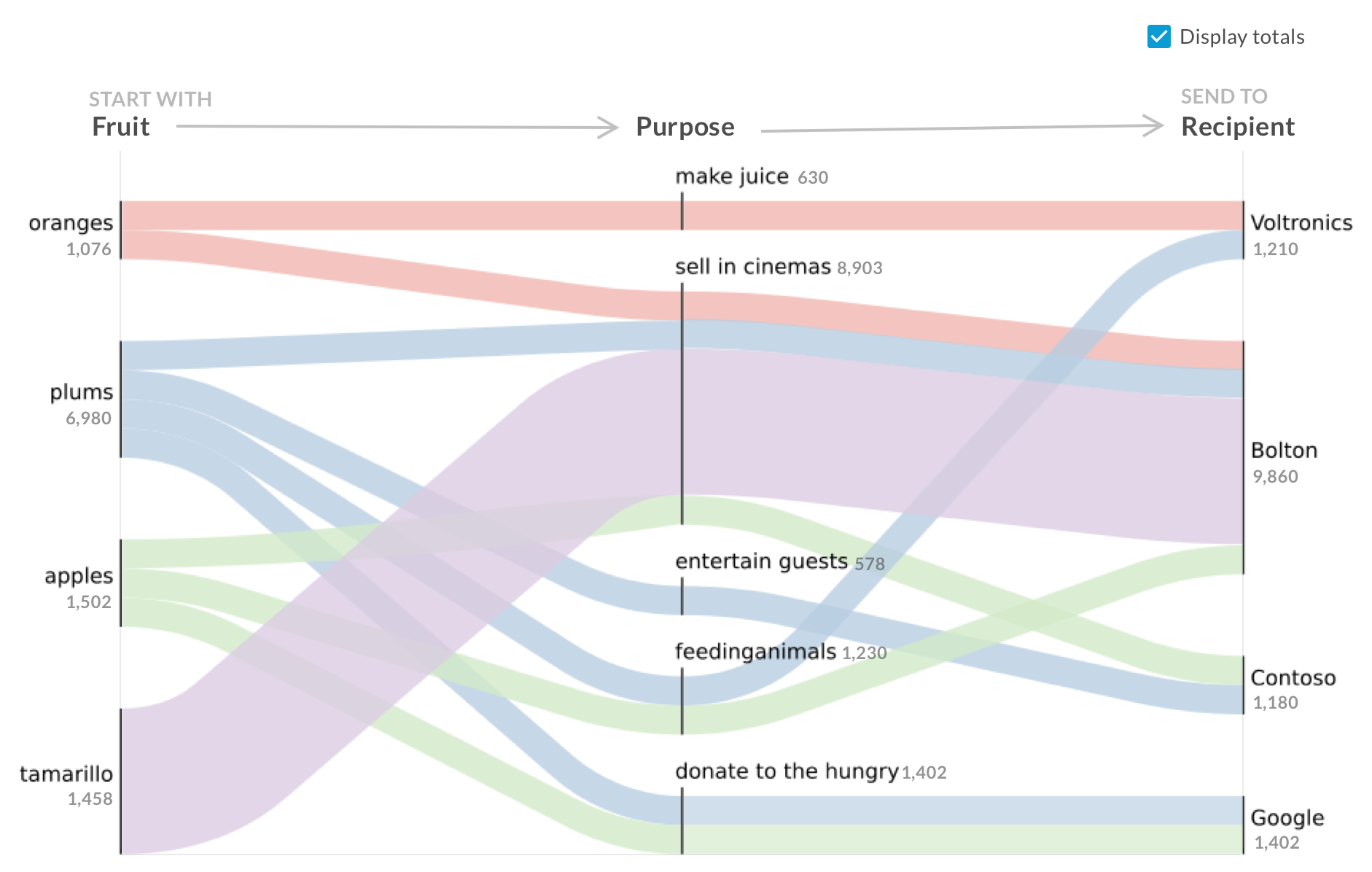 Another example is to make a 'pointer' like element at the right tied to the end labels, so users can still assess volume by the end height of the joining elements (the fruits): 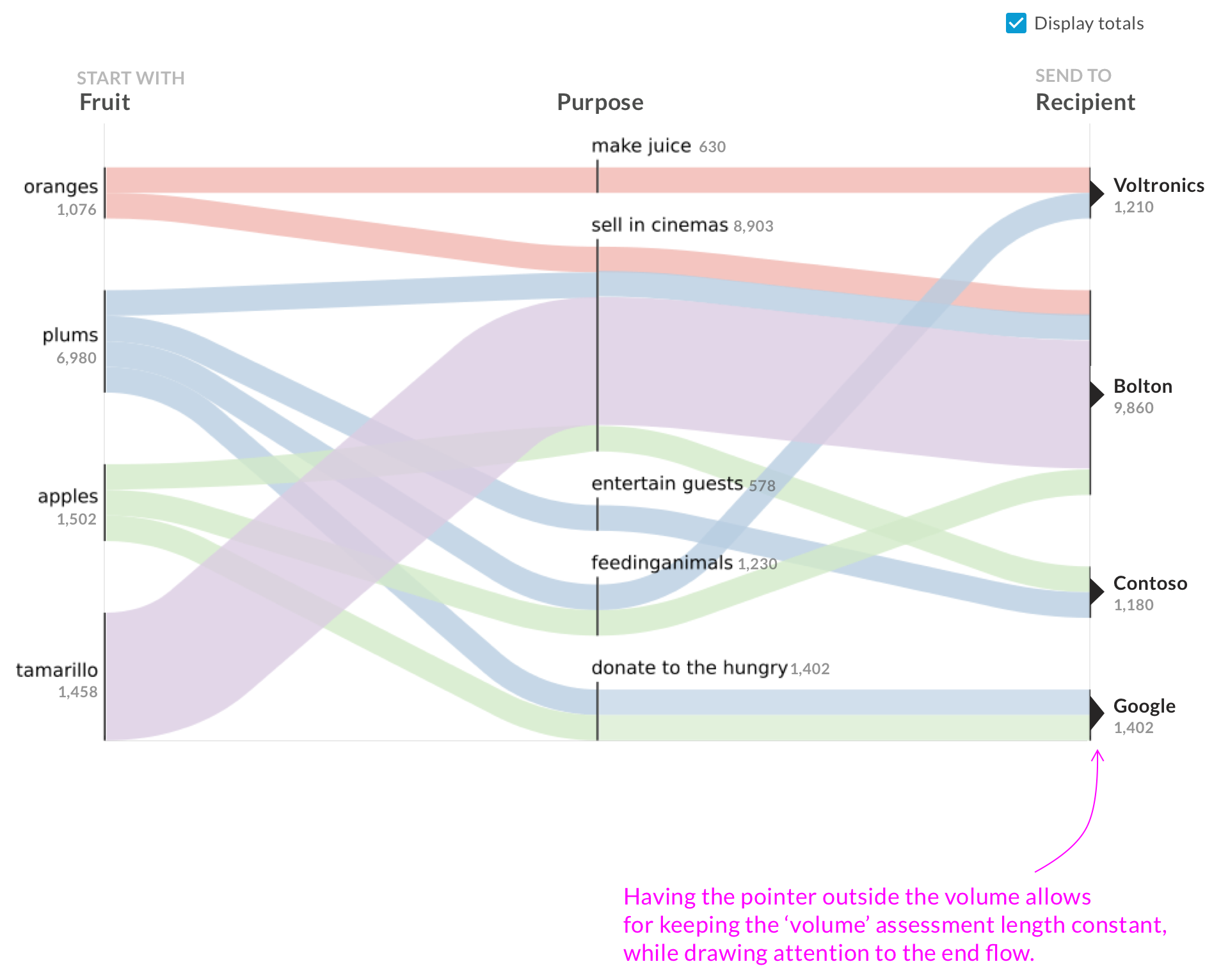 Not the answer you're looking for? Browse other questions tagged info-visualisation information-design sankey or ask your own question.

6
What's the best way to graph results of a matrix ranking question?
11
How best to show the 'weight' (importance) of bullet-ed items in a non-intrusive (creative) way?
5
How to visualize similarity of one file to another?
9
Representing a network of product dependencies as a diagram
8
Multipart progress / status bar colours
3
One-to-many list items in trigger-response model
2
Matching events on timelines of different scales for a video scrub bar
0
Best way to distinguish extremes in a bubble without value label
1
What is the utility of creating a full-depth Visual Sitemap?
1
Best way to Indicate a item is shared or copied