Do people actually use the zoom buttons on a map?

Between touch screens and scroll wheels, are the + and - zoom buttons on a Leaflet map really necessary? I'd really like to remove them if there's no significant case for keeping them there. Not just for space savings, but primarily to declutter since there are many other buttons that can use that space instead.

You’re asking slightly the wrong question. As anyone who has watched a usability test will tell you, if you add a button at least some people will click it.

The real question I think you’re asking is whether people would struggle if the buttons weren’t there and I would suggest many people would, but I can’t prove it without testing (and neither can anyone else).

The reason I’d be concerned is that gestural zoom controls (double tap, pinch to zoom, etc.) are not particularly discoverable. There’s nothing about a flat map that inherently affords zooming, and so it’s plausible that someone wouldn’t realise they could zoom if they’re not seeing a specific control for it.

Buttons are also much more accessible than gestures; people can press buttons with a single finger, with certain motor difficulties, with low quality touch screens, with assistive tech (on the web you can invoke a button with the keyboard, and in a car you can often find equivalent capabilities with controllers like dials or steering wheel buttons but how do you invoke a “pinch” at a distance?).

Your underlying problem about obscuring the map is a reasonable issue. You could possibly consider fading the controls out and bringing them back in when the user taps the display anywhere, or leaving them visible until the user invokes a zoom in some other way. Just make sure you test that your design hasn’t introduced a usability concern.

The thinking behind not implementing the buttons is because the zoom/pinch gestures are almost considered second nature these days.

A cleaner UI allows the user to focus on the content, which in this case is finding a location on a map. The buttons within a mobile context of such limited real estate can be of a nuisance and can just get in the way.

However, keep in mind that most of the users will be using only one hand. Of course there's still the option to double tap, but the buttons still provide more accuracy, you could consider a sliding bar on the side of the screen? Less clutter, still accurate.

I would use a less prominent UI than the example below. 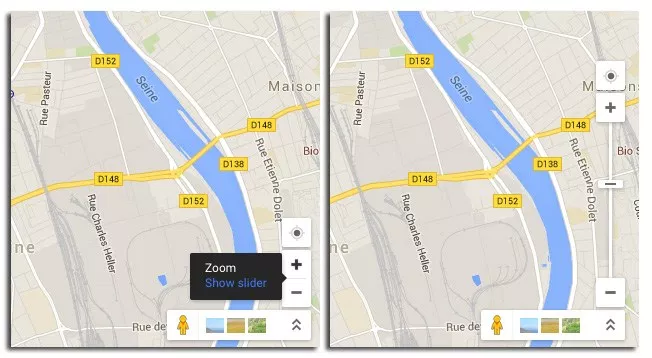 Not the answer you're looking for? Browse other questions tagged gui-design buttons maps or ask your own question.

3
Should a tooltip on a stateful widget describe the current-state or next-click-action?
1
How to handle map borders in 2D-map with drag and zoom out?
1
What are some design patterns for a cycle button?
8
Should a button behave differently when pressed a second time?
2
Circular context menu on hover
2
multi-use physical buttons
7
UI button labeling in touch/mobile web and native apps
3
Testing Filtering Functionality inside a map based native mobile App
1
Tree control in a wizard: scroll page or scroll wizard content
4
How to show that more information is hidden?