Does allowing users to delay a change help them adapt to a new layout? 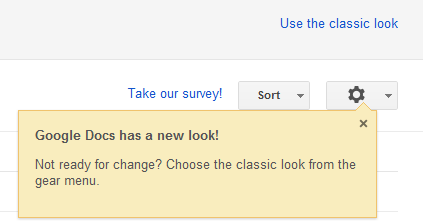 Google seems to be using this to collect data on why people prefer the old layout, as this notification now pops up if you switch:

I'm wondering what the practical reasons are for allowing users to hold back on changes like this. Is it just an opportunity to survey why users do or don't like a change (Google often takes advantage of this possibility) or does it actually allow users to better adapt to what would otherwise be a sudden change? Does it actually lessen the blow or does it simply put it off when users decide not to use a new interface?

I'm not talking about interfaces that allow you to chose between "new" and "classic" interfaces forever (like how Windows 7 allows you to select a "classic" look), but rather when there is only a grace period where you can chose which interface, after which you are forced to use the new interface. In web design in particular the "old layout" option appears to fade away quickly.

It gives the users a sense of control. Rather than having new changes get forced upon them (which they eventually will anyway) it allows those who are curious to check it out, and maybe even suggest the new version to others.

While either way they may not be very receptive to the new changes, at least they will have a slight sense of power in that decision.

It doesn't necessarily help them adapt, it does help them in choosing when to spend the time to do so and not having the change forced upon them when it might be terribly inconvenient to figure out where things went...

I suppose it can be a way to get some feedback on the new design, and understand what proportion of their users like the changes ( or more to the point, how many people don't like it, as most people will just accept the new style ). It gives them a chance to modify or adapt before they role out the new style for everyone.

One thing which wasn't mentioned so far:

In case of productivity tools like GDocs, it is a very likely scenario that you arrive to the app to get some urgent work done. If you are greeted with a completely new UI while the deadline is there, you would probably just want the old UI back in an instant and wish to be let alone finishing your task.

Not the answer you're looking for? Browse other questions tagged feedback changes or ask your own question.