I'm working on an app that displays a list of ten items (text items) on the screen at a time. If there are more than ten items, the user should be able to "swipe" from right to left to see the next 10, or left to right to see the previous 10.

Is there a well-understood symbol I can use to indicate that the user should swipe? Even if not, is there a symbol that will make sense to the user once they've learned that they can swipe?

If not, please address a different model of going through a large list of items in your answer, and I'll change my question :)

Why not try some variation of the following (crude) sketch, with the circle indicating a touch point and the arrow a swipe? 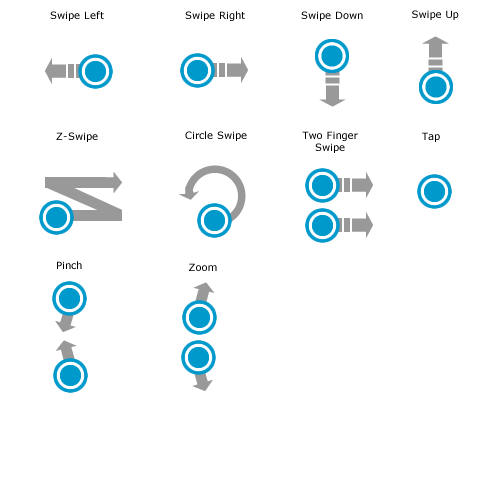 Maybe an approach... Show the user in page indicator under the list, there a more items available. The beneficial: the arrangement corresponds with user mental model and user sees the current page.

Apple's original unlock screen design seems as good as any:

There is not yet any standard, but a good place to start for any touch symbols is the Touch Gesture Reference Guide. In that the gesture would be (depending on what you mean by swipe)

Because it's a touchscreen device there might be a few other solutions instead of using icons or buttons. In the design projects I've been working on I've ben trying to envision how the content can function as the interface so the UI can be more directly engaged with, well at least as much as possible.

One option would be to continue the vertical list (like Mail on the iPhone). Then at the end of the list, which is a single screen, you could provide a "Load more [list items]" control. This avoids overwhelming the users with a really long list of items they need to initially review.

The second option would be to create "Panels", each contain a screen's worth of list items (8-10). Conceptually the panels would line up along a horizontal axis (like the panorama view in the Windows Phone 7 UI). In this option the right panel (next set of list items) would peek out from the edge of the screen and indicate a) its presence and b) that the current panel can be swiped to the left to reveal the next panel. This functionality (only visible on the right) should be enough to indicate that the UI swipes l-to-r so there might only be a need for the hinting of the next panel and not the previous panel.

Not knowing the audience and their goals, etc these options might be off base but I hope this helps a somewhat.

Here's a quick sketch to illustrate the two options

Or use what Apple uses in iOS (which is similar to @sysscore's answer): 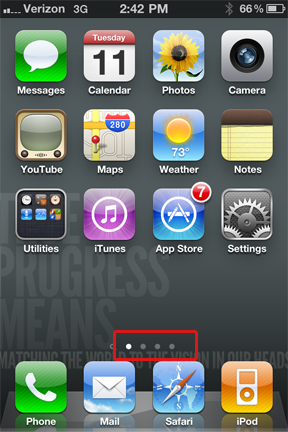 Here, each dot represents another screen of icons

For a similar requirement I'm using an arrow and the title of the next page as vertical text in the margin - indicating that there is something available in that direction without taking up as much space as an icon.

It's also clickable so that the user doesn't need to know that they can swipe - it's just a whole lot easier once they realise that.

The same applies to a next button with a regular arrow icon if you have room for a toolbar at the top/bottom of the screen - Most users will try swipe fairly quickly, that being the normal way to move to the next item on touch devices. The button doesn't need to be big enough to easily use, but it does need to be there to indicate that more content exists.

If you are concerned that users won't discover the gesture, you can provide some contextual help - use JohnGB's large icon as an overlay that appears whenever you use the button instead of the gesture.

The Apple iPhone has a standard indicator which is a row of gray dots, one per page. The dot representing the current page is white. This article has a good picture of it (http://mactips.info/2009/03/arrange-application-icons-on-the-iphone-or-ipod-touch). Personally I find it subtle and I've found that novices tend to miss it, but it is the Apple standard, so lots of people either know it or will eventually learn it. :)

Not the answer you're looking for? Browse other questions tagged icons touch-screen pagination gestures or ask your own question.

11
best image to indicate swipe left right
12
How to indicate that a list view can be swiped to reveal controls?
4
Symbol for additional content present in a passive display

9
Does it matter if Pagination controls are Left, Centered, or Right-Justified?
4
Swipe to expand/collapse left hand navigation
9
Swipe indicators on a small screen
11
Alternative for circles page indicator for many pages?
2
Same gesture for multiple actions in a mobile app?
2
iPad horizontal swipe
0
Horizontal swipe alternative for websites
26
How to indicate that specific sections of a page can be swiped
3
Mobile swipe view with multiple gestures, what would be the best approach
2
How long should a swipe action be to open a sidebar?