I´m analysing various VR apps and I found Tvori, and I love how it handles the different actions that can be done, because instead of using interface elements such as icons or buttons, it uses real objects, such as cameras, brushes, light bulbs, spotlights, and I'm pretty much convinced that how the actions are represented makes their use more intuitive, since the gestures that are made to use them are natural, and also, the behavior that they have can be intuited by the operation of these objects in the real world, which makes it more intuitive. For example, if I want to insert an ambient light, i would choose a lightbulb and I can turn it on and off, or I can choose a pencil to draw from the tip, and erase with the bottom part.

As I say, I am practically convinced that using real objects is more intuitive, but I do not find research about this aspect of the user experience and I would be happy to confirm whether or not I am right.

I wanted to ask if someone knew any source that could deal with this topic in order to go deeper. Maybe the source does not prevent from VR but from other paradigms. Also, if you have any opinion about this topic it will be well received.

Thank you so much in advance!

I am practically convinced that using real objects is more intuitive...

The power of computers comes from abstraction. Computers are glorified calculators. Everything in them is in bits, but because of abstraction, they can do much more than just add or subtract.

Overly literal interfaces don't work well because they prevent the necessary abstraction that makes computers useful. I vaguely recall other examples, but can't find them right now. This should be enough though. 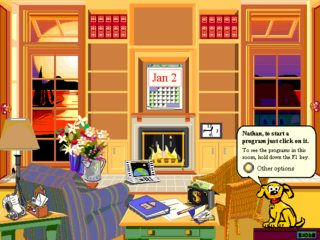 Please click the up arrow before you run away screaming.

As I say, I am practically convinced that using real objects is more intuitive, but I do not find research about this aspect of the user experience and I would be happy to confirm whether or not I am right.

The very idea is very intuitive. Humans remember by linking things and association of things with each other. When we look at things, the memories associated with the object are very likely to surface. Therefore, the experience of functionality of the object will be triggered and the user is most likely to understand.

However, it assumes that the user has experienced the functionality depicted by the object. For somebody who hasn't the UI will be mysterious. Also, the same can be said about plain text as someone who does not understand what the word means find the UI difficult to use. (I do)

However, symbols may be contradictory. For example, if we implemented the symbol UI in Photoshop where I saw such a bulb. The bulb could increase brightness or colour or hue. Such ambiguities can be resolved only using plain text to reflect functionality.

Symbols are not complete

Take for example your toilet flush. I really cannot think of an appropriate symbol for depicting flush without taking away the simplicity, especially after seeing the automated toilets that are available which provide additional functionality. The example may be gross, but it is informative.

Hope it is helpful.

Not the answer you're looking for? Browse other questions tagged interaction-design research virtual-reality objects or ask your own question.

4
How to display a distinction between actions which affect the 'real world' vs. actions that affect only the information in the application?
28
Traffic lights: "yellow" is progress, not state
0
Usability + Sense of high dimensional plots
1
What ways are there to teach users the rules to a game?
5
Represent and edit object graphs with standard OS UI elements
6
Are dial format speedometers more effective than numeric speedometers?
18
which is more intuitive time picker?
0
How can I address forms that require many similar interactions?
44
How to make irregularly shaped objects / elements look clickable?
5
If marking menus are more efficient than linear menus, why haven't they been adopted?