I am putting together a simple single-player puzzle type app that has undo/redo capability. I would like to provide the ability to undo/redo a single action via a button click OR to undo/redo multiple actions via a picker view.

From a design point of view, is it better to use four buttons (undo 1, redo 1, undo via picker, redo via picker) or to use two buttons (undo/redo) where a tap indicates a single action and a long press brings up the picker view.

On one hand, the two button approach provides a tighter appearance. But, I'm concerned that the long press action is not an obvious thing to do.

I've tried reading through Apple's Human Interface Guidelines, but it seems to be silent on this.

For guidance, I'll reference an answer on this site to similar questions:

From a UX perspective [the press-and-hold (or long press) gesture] is kind of odd, since there are no clues that the long press exist on an object, and the user is left to trying it out if they haven’t read the manual.

The long-press is a functionality users don't assume will be there. If you can provide a visual queue, or reveal in a tutorial (which I would deem as mandatory), that a long-press will result in a menu appearing, implement it.

However, the best interfaces are the ones that don't require explanation. Anything that requires time to perform ultimately becomes a mechanic of the game. If there was a timed mode in your game, imagine how frustrating it would be to require the user to hold down a button to perform certain tasks.

What if there was a "timelime" or "film strip" of "saved states" that the user can swipe through and select from that would effectively revert them to a certain point in their game? This would be a very quick way to navigate through undo/redo scenarios and has been implemented successfully in the past.

What's important is that your UI is just as fun as the game, because it is the game. Knowing that's the case, you might want to A/B test different interfaces and see what gets the best results.

From the user end, long press is not going to help. even button with name/title. I'd suggest button with an icon 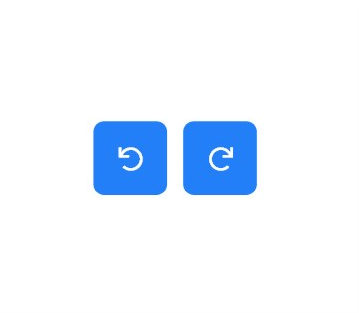 5
Back Button Color in iOS
4
iPhone table view filter with multiple controls
2
Navigation bar and buttons considerations for iOS
2
Long press (press & hold) gesture in iOS app
1
Presentation of long form in iOS
12
How to indicate that a list view can be swiped to reveal controls?
2
Cancel button in iOS popup menus
1
3D Touch for 6s users and long press for iPhone < 6s?
4
Deletion and Editing by Long Press