How can I differentiate duration vs starting time

Let’s say I have a meeting at 06:00 AM that is scheduled to last 8 hours and 15 mins . Are there any guidelines, tips or tricks to display that information in a non-ambiguous way?

If I simply display in the agenda:

It can easily be misunderstood as 8:15 being either the end if meeting or, even worse, ( since we are using multiple timezones in my app) a different time zone time.

The example is obviously made up, in the real app I have a lot of starting times and a lot of durations to express in a relatively small amount of space on the same page. Simply converting to text (8 hours and 15 minutes) is not an option as it will not fit. I have space for maybe max 10 chars per item.

So how so you display a timespan in a way that is different from a datetime?

Later edit: and just to make the question harder. How about expressing time-to-go, as in the meeting is in 2 hours and 53 minutes. I need an accurate display, and most timers/chrono applications that use countdowns (eg. phone alarm apps) infuriatingly use the same 00:00 display for duration

08:15 is typically identified as clock format, not duration.

You could just write (8h) or (8¼h) for duration (see list of fraction unicode chars).

Here is how Google do it: 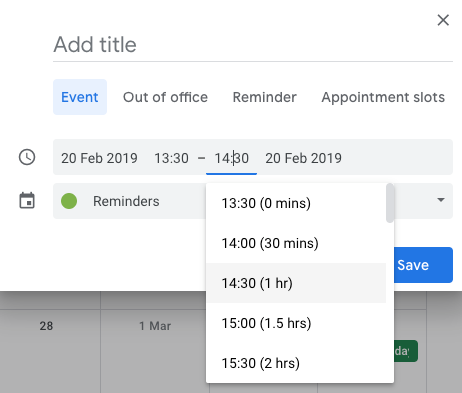 Another question you should ask is:

Which is more important for users - duration or end time?

If a meeting starts at 06:00 and lasts for 7.5 hours - it takes a bit of mental arithmetic to figure out when it ends (and it is fair to assume users might want to know that as well).

If you only display either duration or end time, there's going to be arithmetic done anyhow.

Perhaps you should just use (start-end):

The user can easily infer the duration of the meeting from the give time, but you can also display it after the hours. Try not to put descriptions or labels, they will only distract.

I see there a debate whether the finish time or duration should be displayed and in fact it's not what the OP is asking for. They decided to go for the duration.

So first of all I suggest making it disambiguous by explicitly stating that the bracketed value is time span:

It still looks weird, I'll come back to it later on.

If we were to state the finish time of the meeting, I'd suggest:

We already agreed that 06:00 (hours-colon-minutes) notation is regarded as time of day and does not need any explanation unless a clear distinction between 12 and 24 hours format is expected. The former is indicated by a.m./p.m. suffix, the latter can be indicated by adding a leading zero when applicable (thus 06:00 is 6:00 a.m. while 18:00 is 6:00 p.m.)

Now the time span - I propose using one of the following notations (in the order of preference):

The first two are widely recognisable since the angular units (' for minutes and " for seconds) are often used on sport watches. The choice will depend on how much space is available.
The third one limits the granularity to a quarter of an hour since common fractions of 1/12 (5 minutes) or 1/6 (10 minutes) are not that intuitive. The former doesn't come up as a single Unicode character and the latter would be ⅙, ⅓, ½, ⅔ and ⅚ for 10, 20, 30, 40 and 50 minutes respectively.
The last notation is computational-friendly but becomes ambiguous when depicting a quarter of an hour (8.25h may by some be seen as 8 hours and 25 minutes) and totally unintuitive and illegible when 5- or 10- minutes intervals come up (0.08(3)h and 0.1(6)h respectively, or 0.08333333h and 0.16666667h).

I therefore recommend you chose between the first two. In such case your notation for the agenda appointment would be:

I agree with a previous comment that formatting would make the distinction clear.

I would, by all means, NOT follow ISO 8601's guidelines because "P3Y6M4DT12H30M5S" is one of the most confusing strings I've ever seen! As UX designers, we HAVE to come up with a better way to present duration! ;)

Could you not simply just say:

Says everything and there's no way to get confused, or are there some other constraints you haven't specified? Like max length of memo?

A lot of good answers here. As it's a mobile app and in light of the expanded scope of the question, I'll suggest something a little different.

I'm not quite clear whether this is just a list of entries or a Gantt chart of a day or whatnot, or what existing requirements you have around interaction on these items, but could it be possible to have a function to show additional information about an appointment on demand?

Perhaps have the item double in size or a floating pane appear with extra information like duration, a summary, etc. on tap or long press? I imagine there are some meetings that people aren't interested in the information of, say, a daily scrum, so they would never want to see the duration by default on such entries anyway.

I suggest this because speaking from my own experience, nearly every meeting in my working day is scheduled to be 1 hour, and I would only be interested in length if it was near lunchtime or at risk of colliding with another meeting, but the latter case could be handled by a separate UI cue again.

What about using dur. ?

Starting time: The starting time for our monthly meetings will be 9.30.

Not the answer you're looking for? Browse other questions tagged user-expectation timeline or ask your own question.

91
How to display duration (HH:MM) so it isn't confused with clock time
14
Whats the best way to present a time duration to user?
0
Time stamps vs Duration

0
Scheduling time-slot over a number of days
0
Best way to display start time and duration (since the start time)?
0
How to differentiate between quick sorting and more / expanded sorting options?
4
How to differentiate between button and label
2
Displaying Continuous and Discrete Time Series Data
3
How to show user timetable's items width do not necessarily match with time
2
User design for many items over a time frame
1
How to display hourly averaged time data on a line chart?
5
How to distinguish Time-bound vs One time events in a timeline