I have a React+Bootstrap app which displays a timeline of events, to which the user can add a grid, with vertical markers at regular intervals. The default interval is 1 second, so a vertical line is added to the timeline for every second of its duration. The timeline is toggled on and off with an icon button on a toolbar. However I want my users to be able to change the grid interval to any size they like - 1ms, 5 mins, 4 hours... whatever. Currently I implement this with a split dropdown: clicking the button area itself toggles the grid on with the defaults, but when the user clicks the arrow part the dropdown displays a number input, showing the current interval size, which they can use to set their own interval. I find this an unsatisfactory solution for a few of reasons:

Are there any other alternatives to this way of doing it? I considered a popup configuration dialog, but I want my users to be able to quickly change the value for the interval, without having another dialog to content with. I also thought about allowing the user to drag the grid lines to stretch the intervals, but this would not cater for arbitrary interval values (the user would always have to drag the lines to get to a particular value, which would be particularly problematic for a large change). I also don't want to add another control to the toolbar when the grid is toggled on, as the grid button is surrounded by other essential controls on either side, so such an extra control would have to shift the others along to the right.

This is an essential part of my application, one which users are likely to use a lot, so I want to get it right. I'm honestly a little stumped on how to solve this, however. Any suggestions/observations most welcome.

N.B: I also considered making the grid a permanent fixture, but the type of data displayed on the timeline (events in a musical score, measured in absolute time onsets) make that a less attractive option.

Try adding interval controls only when a user asks to display them. Keep the fields open for input, and surface the option to save only after a user modifies the time interval grid.

I hope I understand your use case correctly, but here goes:

The initial display can be your default. If most users find it helpful, start with the checkbox enabled. That state also displays the current grid marker interval. 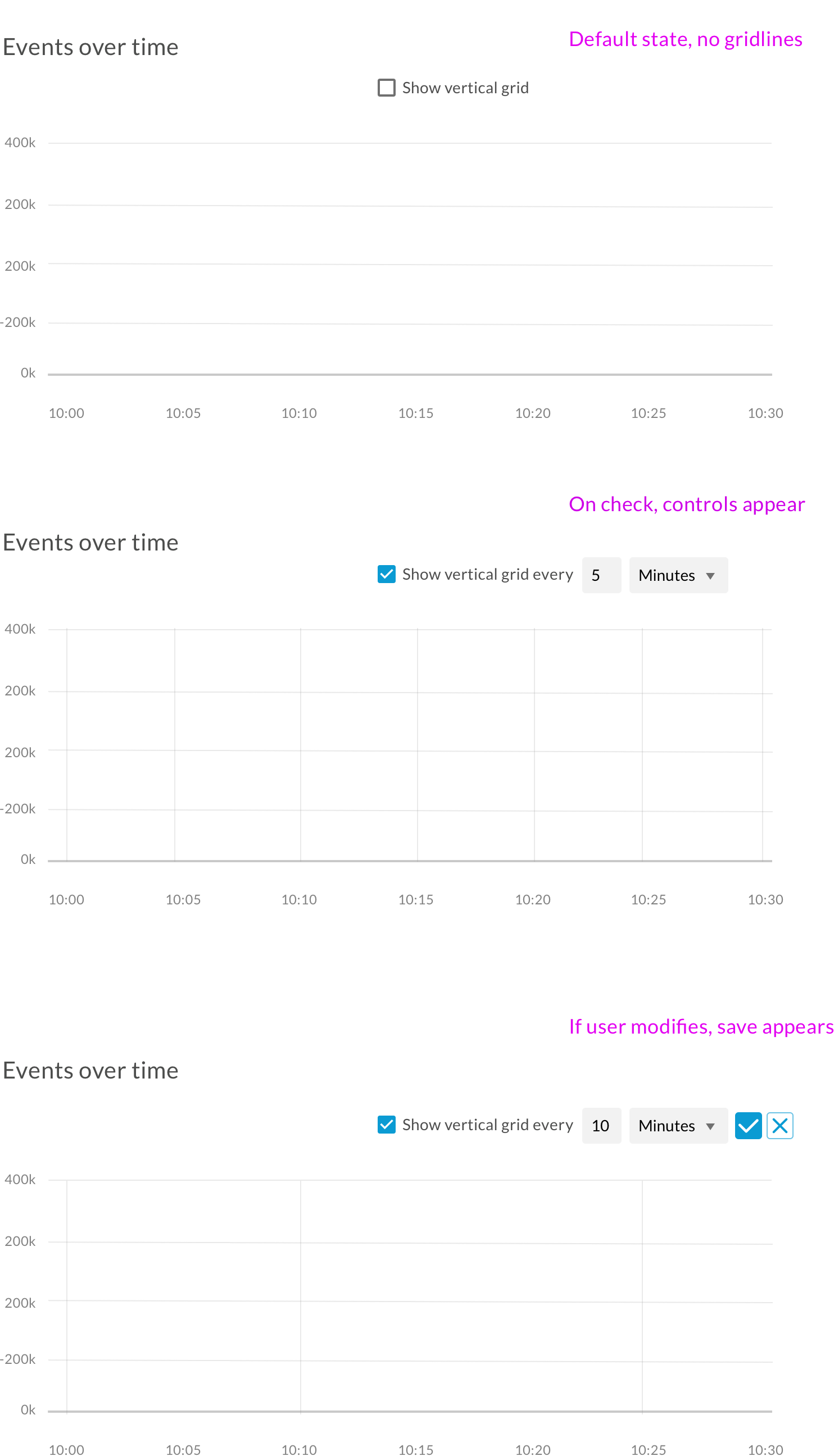 Not the answer you're looking for? Browse other questions tagged toggle timeline bootstrap react or ask your own question.

4
Representing the presence of short events in a long timeline
3
How to best represent scheduling information for a manufacturing dashboard
3
Advice on how to re-order elements for smaller screen size
2
Matching events on timelines of different scales for a video scrub bar
2
Showing details of an event in a timeline
4
Looking for an easy, user-friendly way to group people based on recency
4
Distinguishing overlapping event types in a timeline
1
How to improve discoverability of unclicked tab?
2
Displaying Continuous and Discrete Time Series Data
0
Button Group for filtering time range with no default value selected