Is UX the same as Usability?

The two terms have seemingly become synonymous, but is "user experience" really the same thing as "usability?"

It would seem that some sites, apps or products provide the user with an experience that is, overall, enjoyable without being as usable as they could be. (Facebook and MS Office come to mind).

Can a site, app or product provide a great user experience without providing the best usability?

Usability is a subset of the whole User Experience.

I would argue a product can not have a good UX without good usability; see Simon J. Hill's piece on Usability Vs. Experience. He frames the problem in a "problem solution ladder," where usability is a low level (but vital) rung, and too often it's considered the only important element by some companies. Too often is that logic abused to assume that usability and experience are in fact incompatible.

A "Google vs Apple" debate is often cited (which is what prompted Simon Hill's piece) claiming Google is about usability and Apple is about experience. It's wrong, both companies spend a massive amount of money and research into UX and both are major companies because of their UX, but that's a greater debate than I care to get into.

Just because experience can suffer due to excessive focus on usability does not mean more usability equates to less experience; in fact I would say the opposite is true. The problem is that many companies consider usability the only piece in the puzzle, and that is where experience suffers.

Neospot shows this visually very well; UX has more than usability, but usability is an integral part. It's like Maslow's Hierarchy of Needs (not that it's the most well supported theory). You can't reach the top without the bottom, you can't have a brain without a neural network, you can't have a good experience if using a product is painful!

Take a look at the Boersema T-Model of user experience, and you'll see UE is one of the branches/stems of specialisation within the wider UX field of practice. 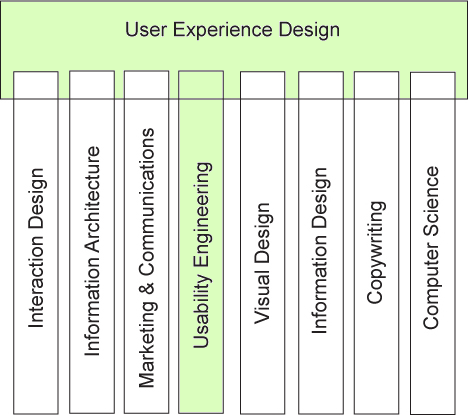 An exploration of this, with regard to a different stem (IA) is in this excellent article: The T-Model and Strategies for Hiring IA Practitioners: Part 1

The book The Design of Everyday Things by Don Norman really taught me about what usability means to people. Don's second book Emotional Design taught me about user experience. They are wildly different subjects and I strongly suggest reading them.

Usability is important for many things in software design, but User Experience tries to take it further and establish an emotional connection. One interesting article recently on the subject is "Minimum Viable Personality". Definitely a great read.

I hope this helps you differentiate.

The big difference between the two (from what I get from it) is that Usability is focused on making the product easy to use. Using intelligent, thoughtful design that helps the user make less mistakes, intuitively teaches how to use and creates a short learning curve.

User experience is based on the feeling that a product gives, its environment and mood, creating a sense of trust and understanding of the product.

Unlike usability (which is defined in a ISO norm), “user experience” is used somewhat loosely across the industry so that it's difficult to claim that any particular definition is the definition of UX.

What can be said is that the notion of user experience appeared much later than usability, in an effort to go beyond purely utilitarian aspects. In that sense, UX therefore includes aesthetic qualities and the fun or pleasure one can derive from using an interface or product and is broader than usability.

It's quite common to see UX as a step beyond usability, a way to differentiate a product from its competition by providing some intangible hedonic value above and beyond fulfilling a given function efficiently but it's possible to imagine products that elicit a superior user experience with only average usability. I don't have a very good example but one that come to mind would be early real-time strategy games like Dune 2000. They were extremely well done and many players loved them but you had to move dozens of units one by one which is a real pain if you compare that to the usability of later games.

It's less common to present things in the other direction but in some ways, usability is also broader than UX. If you look at the common definition, satisfaction, the “subjective” part of usability, is only one of three aspects of usability (together with two “objective” aspects, effectiveness and efficiency). It's therefore conceivable to experience a product as usable and very easy to use even if it's not the most efficient one and some other interface can be shown to enable users to complete a given task quicker.

In practice, user experience, satisfaction and other aspects of usability are often related but they are all slightly different ideas. If you want an academic take on this, you might want to look at http://www.allaboutux.org/uxwhitepaper

There is in fact a number of academic papers looking at the distinction between perceived usability and aesthetic quality (which can be thought as a part of user experience) and debating how independent they are empirically. See for example:

(As suggested by Patrick in the question comments I'll move my other answer into this questions where it's more relevant).

There was a blog I read ages ago that gave a really good analogy here. (No idea where this was from, I'll see if I can find it so I can credit the source).

UX and Usability are akin to driving on a mountain pass or a motorway.

Producing a usable application that is also a good user experience requires meeting somewhere in between the motorway and the mountain.

/EDIT - I think that this is the source of this analogy : Battle between Usability and User Experience

My 2c worth. I think Usability is often more about the functional ability to use a product to to perform a function. That is, to use one of @Glens images, a vehicle is most usable if it can transport you - and whoever or whatever you need - to wherever you require, as often and for as long as you need. That is, does it provide the functions of transport, and does it do that well. All of which is critical, because if any vehicle fails to transport you at all, it is not much use.

But most people buy a vehicle (or anything else) for more that that. User Experience is about making the transport of you and yours as pleasing an experience as possible. And this may have a whole set of differing requirements. A Ferarri may give me the driver a far better experience, but the passengers might not agree. UX is about providing as positive an experience for as wide a range of potential users as possible, without compromising Usability.

The variety of different cars for sale across the world is a testament to the differing tastes of people. The challenge of providing a software application that caters for a range of these car buyers is what a lot of UX is about. As well as understanding the particular user base. And then selling them something that carries as much as an Arctic, is a fuel efficient as a Smart Car, and performs like a Ferarri.

Imagine a user using some sort of service. What does this user want? Make a list consisting of everything a typical user will want from every (or some specific) "service" and I think this list can be called as an User Experience.
And Usability is definitely something what every user wants from service and in that sense I think the Usability is a part of User Experience.

ISO definition of usability is "The extent to which a product can be used by specified users to achieve specified goals with effectiveness, efficiency, and satisfaction in a specified context of use". This definition is quite old, being developed at a time when computers were not so cheap as today and were primarily intended for work (note that satisfaction is the last desired property).

These times are long gone. Of course computers are still used to DO work, but a whole bunch of other computer-related activities has emerged. For example, can buying at Amazon be considered a working activity (the answer is Yes if I'm looking for special tool for my trade and No if I just want to get a new book to read).

So UX have emerged. Basically its the goode olde thing usability, just without a tasks that users must accomplish (instead they may, if they will want to). So IMO it's advisable to look at UX as a "The extent to which a product can be used by specified users that don't give a damn to achieve specified goals with effectiveness, efficiency, and satisfaction in a specified context of use".

Note that UIs are indeed are getting better over the time, but still there is quite a load of work to do at usability departments everywhere. But, since most of such work is in enterprise (which is basically hidden from observers), lots of usability folks are simply unseen at the internets. They simply have no direct reasons to be vocal, promote usability etc. That's basically why UX is so much popular term these days.

In both examples use cases are mixed. If you are looking for enjoyable drive and you are the sort of person that enjoys driving twisting roads then sure the mountain road offers good user experience. However it also offers great usability if going for enjoyable ride is your goal. Similarly the same road offers very poor user experience if you don't enjoy driving or if you are tired and are having hard time concentrating on the driving. The use cases are completely different.

Similarly with Porsche vs. minivan. Going for a joyride with Porsche is likely to be more enjoyable for most people vs. minivan. In the same vein most people will rather move house using a minivan vs. Porsche. Use cases are completely different which leads to different goals which leads to different aspects of products being important. Offering a good user experience/usability boils down to catering for the use cases of the specified users.

I think UE is a useful term to convey more precise meaning of what is satisfaction in usability. This "battle" reminds me mostly of the flamewars between usability experts and graphic designers from way back.

Not the answer you're looking for? Browse other questions tagged usability user or ask your own question.

0
What's the difference between user experience and usability?
-1
Web Usability versus Web User Experience?
47
Can ugly be good UX?

7
Usability Guidelines
9
Counting to Infinity - Are counters usable?
4
Is 'usability' enough for a company portal?
4
Legends in table data
1
Designing offline browsing experience. What to consider?
3
Should different apps in a product have a consistent layout?
2
Can we use "Continue with Email" instead of signup/login?
0
Is this considered Formative or Summative Usability Study?