How to effectively capture nested data?

We need to capture data in the following structure(A json payload is the easiest way to represent the structure I know of):

The user has to capture this information in a form/forms/table. As you can see A is a collection of data, so is B3 and C3. Basically it's nested collections of data.

Something to note is that the structure represents a single domain entity, i.e. D1 doesn't make sense outside the context of the C items and so on.

We initially thought the easiest way split up the capturing process without loosing context would be to have an A page that has a table of B items and a button that allows you to add a B item. Upon clicking the Add new B item button you are taken to a page to capture B1, B2 and a table for B3 that contains C items also with a Add new C item button and so on... While maintaining context with a breadcrumb. So if the user is on the deepest page and capturing D1 the breadcrumb would display A/foo/bar

The primary users of the system raised concern that there needs to many A items captured. And being moved from screen to screen would be frustrating. Their suggestion is that the data be captured in a table. e.g.

Our issue with this is that there is so much duplicated data being typed in over and over again. And another issue is the possibility that the user could make a typo, creating 2 instances when only one was intended i.e. foo and fo0

I guess my question is, is there a nice way to allow users to capture large amounts of nested data at once?

Need to be careful to make sure that the user understands that there is a parent-child relationship here, that data from A dictates B and B dictates C. The table does not communicate that effectively.

A tree/map UI of some kind would allow the user to not lose the context of the parent values whilst capturing the child items... Maybe allowing for a typeahead of some kind if the values are non-numeric, in order to use linking, instead of duplication. If the values in question are numeric, allow some kind of drop down to link to previously entered values and a numeric input field to add new values. This also enables you to graphically represent the decisions/inputs made by the user in a tree/map, allowing the user to easily spot any mistakes. 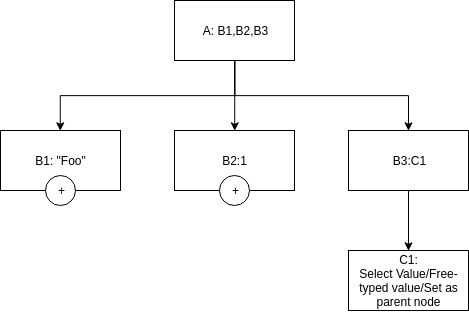 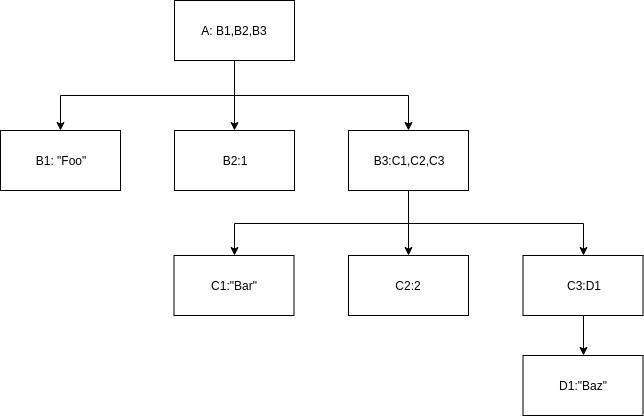 This is like building a multi-level menu traversal, just easier to see all relations at once.

EDIT: You could also think of it as a multi-leaf tree/multiply linked list/map.

If there are multiple variants of A, so A1, A2 etc.. Then a matrix UI structure makes more sense.

Not the answer you're looking for? Browse other questions tagged tables input nested-tables or ask your own question.

8
When is a table the proper way to present data?
38
What is the best practice for data table cell content alignment
2
Pagination of tree structure tables
4
Best way of editing rows and row details of a UITableView in iOS
0
Sorting and pagination of unknown data set
1
Having Trouble with Nested Line Items in a Mobile App
1
How to represent a list with one item?
7
A table within a table - Table Inception
1
Should previously selected rows of a table (via row checkboxes) be retained when the user uses a search box to search for a table entry?
2
About the actionable data table