How to arrange elements in a row with two distinct values?

I'm currently designing a CRM, and am wondering how to place a specific piece of contingent information in the table section. As you can see in the attached snapshot, the top row is slightly different than those below it, as it has a check icon and number values below the task subject (this means that 1 of 3 to-do list items relating to that task have been completed). The other rows, meanwhile, have no check icons because there are no to-do's corresponding to their tasks. Here I solve for the presence of this unique piece of info by bumping up "14-Day Check-In," putting the icon and number right below it, and centering those two values on the row.

My question: Does moving "14-Day Check-In" up a few pixels create bad visual inconsistency with the other rows? Should I just put the check icon/numbers below that value without moving it?

(note: based on user goals, the to-list value on this page is a must-have)

You can use as guidelines the structural lines marked by the buttons on the right to align the whole line:

To answer your question, I think the visual weight and different sizes of the task subject and the check icon/digits are quite different - different enough that if you raise the task subject up, then it affects the horizontal scanning of the table row. I think it's better to place it underneath without raising the task up.

Here's an example with half the items with the check box and half without: 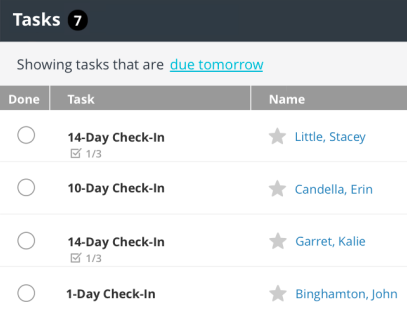 The above version scans a lot better than this one below, which looks messy and jumbled: 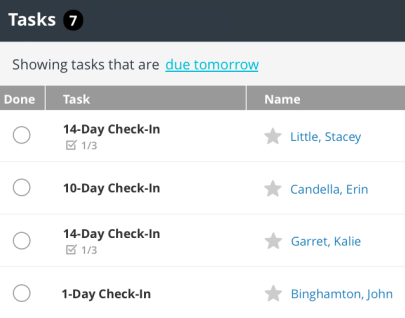 I think the first image above looks fine - however, there is an alternative to having it underneath at all. You could right align the to-do check+numbers (if present) so that they are horizontally aligned with the task subject - then it becomes another vertically scannable list of items.

In the case where someone has a long task name and there's the icon/digits, then truncate the task name with an ellipsis and show the full task name as a tooltip on hover. It's only the equivalent of about 6 or 7 characters and in the event that someone enters a really long task name then you're going to have to truncate it anyway...? 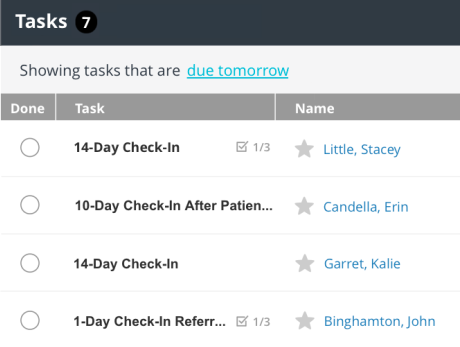 Not really, its ok to move it up. As title + checkbox are perceived as a group, which is vertically centered to radio. Simetry thing, right.

Not the answer you're looking for? Browse other questions tagged tables icons crm value or ask your own question.

1
Sorting table according to a single column with multiple values
1
What and how many discrete priority values should I use to describe importance of announcement inside web application
23
Table with actions per row
5
how to represent disabled cells into a table with alternate row color
8
How to make text selectable in master/detail table view?
2
Need ideas and opinions on table display of objects in different states
3
Inventory system with multiple quantity values
4
Complex form design pattern, common shared values, mixed with unique input values
5
How to handle a data table with row selection and infinite scroll?