I'm currently building a web application which does task management.

A very common function is to "delay" the current task, which means it will be postponed until some point in the future. There's already a link to click to delay it with the mouse, however I would like to make sure this can be done with the keyboard as well, for power users like me.

I do this extremely often, so I didn't want to use a slower key combination like Ctrl + D (not to mention that's already used for bookmarking). I really was hoping for a single key solution.

The function keys tend to have purposes already in the browser, and on laptops like mine and some others you have to enter a Fn+ combination to actually use them.

I didn't want to use any of the letters because it's quite common to have a text field selected, and you would end up typing in that field instead.

Temporarily I'm using the "delete" key, however even though that has the same first 3 letters, I think it's a bad idea. I've already accidentally deleted emails a few times by having the wrong screen selected. (Thankfully there is a trash bin.) I'm sure that once the app becomes public this is bound to cause immense frustration.

So my question, is there any standard set currently for what key could be used to delay, postpone, snooze, etc...? Do any other programs that you know of have a similar function?

What key would you recommend as the most intuitive to be used for this function?

A couple of thoughts here; Will this web application be available to Mac users (your examples were very Windows centric). Also to consider if it's to be available to tablet and mobile users.

Regarding the answer - one way to consider this would be to explore with users what they think might be an intuitive solution. (I guess that's what you're doing here - my answer would be something like SHIFT + RIGHT ARROW) as the I'm going to 'Shift' that task into the future (which I might remember if coupled in my memory with an arrow pointing right)

You might then want to build some prototypes and set users a specific task that would likely utilise this shortcut and test if users feel it's right or have any thoughts when retrospectively interviewed about their experience.

Spacebar is a Popular Pause Keyboard Shortcut Among Streaming Services

The old adage, "users spend most of their time on other sites" is useful here and leads to the rule of thumb: use standard conventions seen on other applications to reduce learn-ability.

Popular streaming video videos sites such as Youtube, Netflix, and Hulu all use the space bar to pause video. If your delay can be conceptually linked to pause or (even better) re-worded to pause, then this common keyboard shortcut will work well for you.

You mention a concern about having a text field selected, and I'm afraid this solution does not address that. Instead, this is a suggestion for a standard pause/delay keyboard shortcut

I think here the problem is not what key is used but how the functionality is communicated.

Although you do highlight issues around overriding existing browser / website functionality which is definitely a good idea to avoid.

The real question is how you indicate to the user how they achieve a given task. Commonly for a button as an example the button text indicates the function it performs.

I thought I had a better example, but this from Github shows the user what keys can be used to perform an action. 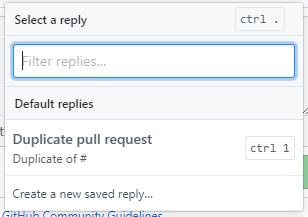 As a final point, you should definitely consider..not worrying about this.

however I would like to make sure this can be done with the keyboard as well, for power users like me.

You'd be surprised how inaccurate the concept of a power user is. Be careful you're working on a feature with limited benefit.

I do this extremely often

You may, but "You are not the user". Find out if it's a feature you users want before investing your time in it.