How do I succinctly portray the status of a filter, showing which options are enabled or disabled? [closed]

Ask Question
Asked 1 year, 7 months ago
Active 1 year, 6 months ago
Viewed 316 times
5
Closed. This question is off-topic. It is not currently accepting answers.

Suppose you have a todo list application with a filter bar (for searching and filtering what tasks to see in the list), and the filter bar has a status selection, thus:

The status filter can have one of these values for

"SHOW ME ALL TASKS THAT ARE":

- NOT Not Started Tasks

- NOT In Progress Tasks

As you can see, the red negation color makes it hard to see and doesn't REALLY clearly and intuitively indicate a negation, in my opinion. You would have to be told that it meant negation.

Is there some clearer and more intuitive way of depicting a negation in a filter?

FINAL RESULT as per SNag's suggestion:

Keep it simple. You could redesign your UI to present icons with checkboxes -- New (Not Started), Started (In Progress), Completed Tasks -- and the user could tick all or none or any combination, and you could display results accordingly. This will work in a way that the user is already used to on most other UIs and there's no learning or confusion.

Not ticking any, or ticking all of them, will result in All Status results, ticking New and Started will give the user NOT Completed results as you would expect, and so on.

You'd be solving the problem without introducing negation of icons visually as you'd originally wanted.

Update:
If this is a dropdown of checkboxes in the UI, you could display the current state when collapsed as a summary text. Here's a sample of all 8 combinations for 3 checkboxes:

It’s not the answer you want, but I’d suggest you strongly consider using text for this job.

As you can see, the red negation color makes it hard to see and doesn't REALLY clearly and intuitively indicate a negation, in my opinion. You would have to be told that it meant negation.

Right now I dispute that any of the icons “really clearly and intuitively” indicate anything. In fact I’m not sure I’d have understood that they’re actions, nor that they’re filters.

A checkbox icon looks an awful lot like a checkbox. An in progress icon looks exactly like a loading indicator. A hollow circle conveys very little.

In all these cases, the problem is caused by trying to convey a relatively complicated concept with a single, small icon in isolation; while I appreciate the space constraints, redesigning the interface to accommodate textual labels would almost certainly do the job better. As Luke Wroblewski is fond of saying, obvious always wins (and there’s no shortage of additional examples).

That problem is compounded by trying to distinguish two icons by colour alone, which is not recommended even disregarding the contrast issues in your specific example. Colour distinctions become less clear on different displays, in different lighting, and especially with different colour vision. If you insist on using icons, a small overlay cross or banned icon like this is more helpful: 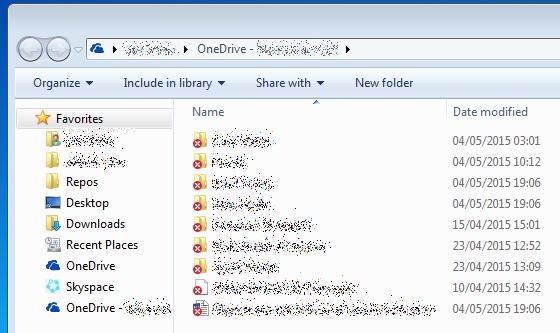 For negation, try using the positive icon with a slash through it. For example...

Also consider using a text search rather than icons. For example, people might search for “state:open OR state:closed” instead of searching for “not not open” (which is probably less intuitive for most people).

Following Gestalt Principals, have you tried grouping the filters so that all of the negated are grouped on one side and the enabled are group on the other?

You could then add a small text label to define this grouping.

Not the answer you're looking for? Browse other questions tagged icons info-visualisation visual-cues or ask your own question.

25
How to warn a user they are approaching the character limit for a text input field with a soft maximum?
3
How can I show marking state (for individual data values) in aggregate representations?
6
Is there any value in using “irrelevant” icons
10
Best way to display plus/minus or pros/cons short sentences
0
How can I convey enabled vs. disabled status for a rule in a rule list?
13
How do you visually represent “progress” on a negative (lower is better) goal?
0
Two Color Progress Indicator
4
How to show linear progression of color mixes from primary, to secondary, to tertiary colors?
2
How to display data behind a data point in a matrix?
4
Communicating that something is clean