I'm working on an app for a volunteer organisation (Scouting group) where users can indicate what he or she had to drink from the bar/fridge. This so an 'admin' can see how much each person had to drink and ask them to pay the drinks every 2 months.

The analog way this is done now, involves a big piece of paper, laid out in columns and rows. Rows indicate everyone in the group of people. The columns indicate drinks. So when a person drinks a Coke, he draws a small line in the box for Coca Cola with his name.

This table illustrates how the paper looks right now:

I've already made an app that uses this pattern:
User chooses a drink → user indicates for every person how much units they 'ordered' for that drink.

This means, when you get drinks for 5 people, whom all had a different drink, you have to do a lot of tapping to input everything. It's very important the users can quickly enter the drinks. Now the app is not used a lot because how slow it can get entering everything.

Is there a known UX pattern to solve this kind of problem? An example of an app doing this would also be convenient. I've tried searching for it. The fact I can't name the problem simply make this a touch hard.

Thanks for the input!

Im not sure what is your process exactly (how you take all inputs, and how you use this information further) but for me seems logical to Organize interface around "Drinks" .. So here is quick prototype suggestion 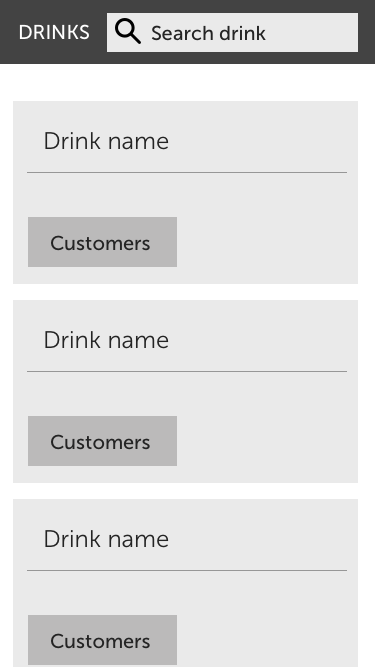 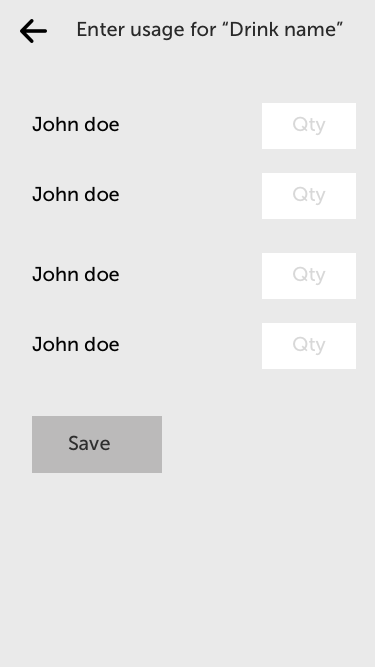 We found your question and conundrum quite interesting in the department, we came up with this.

The idea being you add or remove users from the patrons list, therefore you constrain the people you need to search to only those present. Secondly, quick access buttons open the relative items and you can tap to add those items and then save, showing the balance on close.

It's not finished and it needs refining, and you can't remove tapping completely, but I think this gets you to the tab scenario pretty quickly.

The item sold out idea is again to constrain the product list so the user doesn't have to bypass items that are not available, finally the product list is presented as card, making the product description, adding and sorting easier. 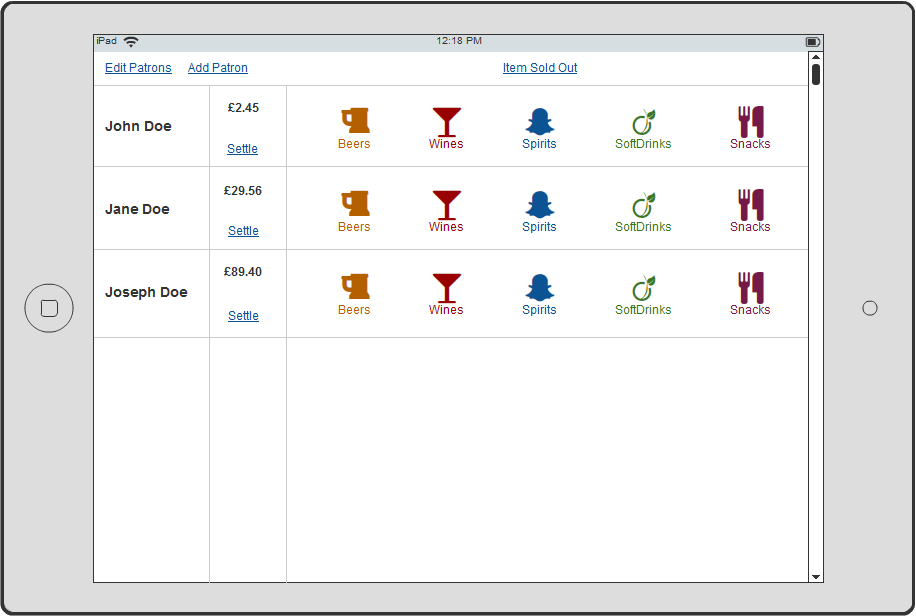 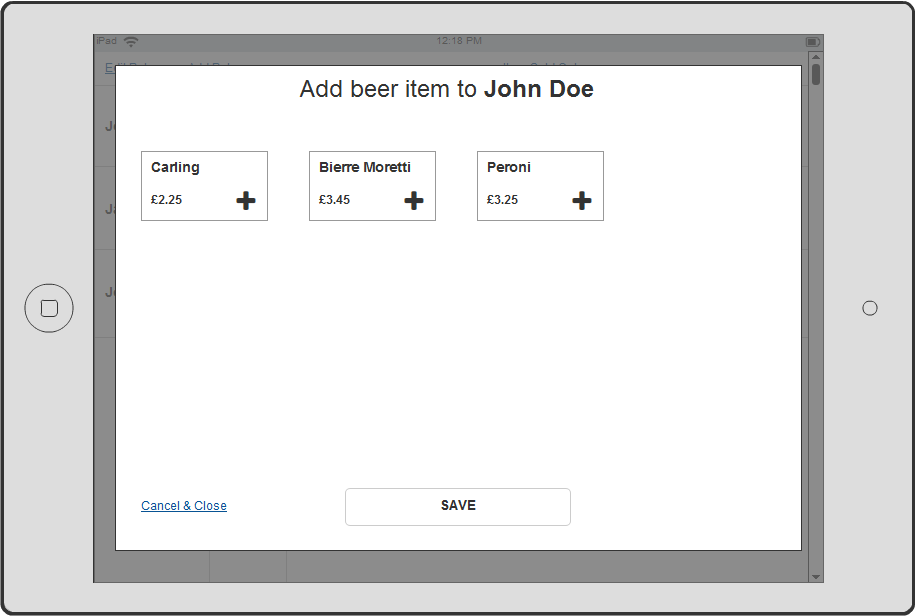 It sounds like the problem is the app makes one user do all the work like a server (human waiter/waitress).

Everybody should use the app and order their own items.

Get more people on the app. It makes ordering faster and easier. Nobody has to be a server or somebody can run it. I don't know physically what it's like but the app can do a lot of the physical work of servers.

This could take that negative UX that one person has and turn it into a positive UX for everybody. They can order from the app instead of a person.

Firstly, I would the question what problem does this solve and is building an application the best way to solve this problem?

If there is good purpose for an app based solution, then I would suggest looking at QR scanning, with a bar code system, which gives each beverage a unique ID.

The user just has to open the app and scan the beer using the camera to create the invoice.

Having the user navigate the screen with a series of screen tapping is not how one enjoys a beer (or any cold beverage of preference). Bad user experience.

The barcode scanner is a fast input idea. You could maintain two simple lists on the cooler.

This is assuming that neither list is overly long, but could still be done with 40 people pretty quickly.

The use would be to scan a consumer's code then scan the product code. You have not added a tally mark to the system.

This can work for a single person getting up and getting drinks for themselves and or others.

Not the answer you're looking for? Browse other questions tagged interface data-tables app or ask your own question.

4
How to simplify an interface for assignment of objects?
1
Visualizing individual data usage from the same data pool in a table
4
Simpler query builder UX for querying OLAP / Dimensionally Modelled data
1
Summarising grouped data in a data table
24
Table with actions per row
2
Some advice needed on working as a UI designer in a app dev company
2
How to sort a table which has live data coming in from websocket?
2
How to show important items at the top in an ordered data table
1
Input data in data tables