What is the best way to display per-tab commands or actions?

I am working on a multiple document interface Windows application. We're using tabs to represent open documents for editing. 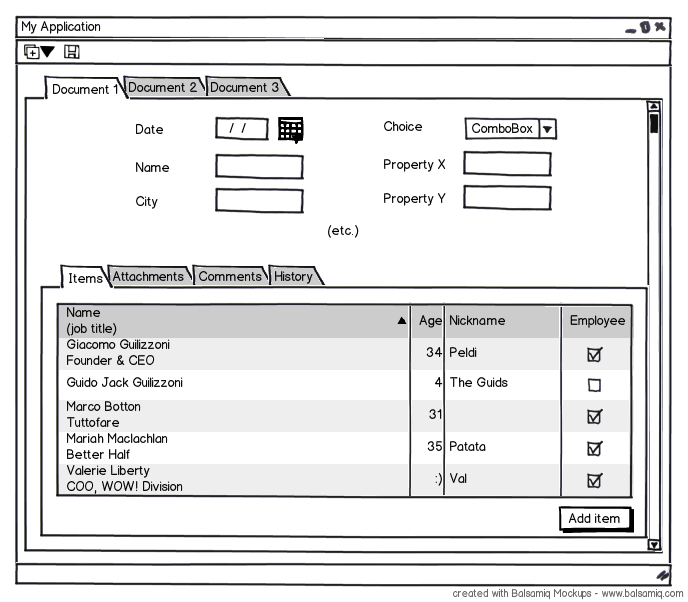 I have three levels of possible commands:

Really, though, the "Save" command is related to the active tab, and additionally there are going to be n number of other actions one could perform on a given document. These would be the per-tab commands.

And beneath that, each document has several lists of other things which it comprises. Currently the app displays these as sub-tabs of tables, mostly. Each list generally has its own CRUD (Create, Read, Update and Delete) actions, too. Currently, most of the CRUD actions are only accessible via context menus, which I know should always generally be redundant but I haven't yet figured out a good way to show them since they often depend on whether a single item, multiple items, or no items are selected.

I know of many apps that use the global toolbar in a context-sensitive way (Visual Studio and older Office apps back when they were still MDI) but I don't much like the idea of cluttering the toolbar with all the possible tab actions and disabling them contextually. Mostly this is because there are too many possible actions, it doesn't scale well should we need to add additional features/actions later, many do not reduce well to an icon representation, and different kinds of documents would have different kinds of actions with only partial overlap. Dynamically changing the toolbar buttons when switching to documents of different types breaks the stability guideline for toolbars and it still doesn't solve the icon problem.

How should I best display these various levels of commands? Ideally, it should be logical and easily afford to which level the command pertains ("Add" should add an item to the sub-tab list, but "Save" and "Submit" should affect the whole document).

I thought about putting a secondary toolbar immediately underneath the tab headers, but one that is more suited to actions (think Windows 7 Explorer's toolbar with Organize, Email, New folder, and such), or possibly a right-aligned Actions panel inside the tab contents (think the Windows 7 Event Viewer or Task Scheduler).

As for the sub-tab tables, I like the accepted answer on this question but a hover effect for row commands is really more suited to web apps and doesn't seem to translate well to traditional Windows desktop apps. Or am I mistaken?

So, I think great example of an application that has been dealing with this issue for years is the Adobe Creative Suite. I think it handles it pretty nicely. I don't know exactly what your tab specific actions are, but for Adobe's suite there is the left toolbar that exists below the tabs, so it is always inside the tab you have active. Global actions of course are in their natural space as the main top toolbar. Then they have a context-toolbar below this toolbar. The left most element in this toolbar tells you the natural of the item you have selected, rather it is a single item or a selection of items. then it displays the actions you can perform on such a selection. Actions should maintain a similar order across types of selections so it's easy to find a command. For example, in Illustrator the move and resizing commands are always the furthest right commands, across all types of selections, while manipulating appearance, like color and shape are the leftmost after the name of the selection.

Not the answer you're looking for? Browse other questions tagged buttons gui-design desktop-application tabs toolbar or ask your own question.

13
What is the best way to display edit/delete actions on a row?

2
How many toolbars?
3
Alternate to nested tab controls for a windows desktop application
3
TDI vs SDI - when should an app that saves files to disk have one window per "document"?
2
Organizing hidden commands in a customizable tool bar
5
Alternatives to Menu + Toolbar or Ribbon
2
Segmenting tabs without sub-tabs
2
Where to put context-free controls in a tabbed UI?
1
Combining tab bars iOS
6
About Commanding in UWP apps. What commanding approach is best? office like?, UWP? or classic win32?
1
unexpected behavior: minimal surprise or user guidance?