For an unknown number, what text should I put to make it clear that data is missing?

Say, a user schedules a task, but doesn't enter their start time, but enters their end time. In this case I would later prompt the user when reviewing to enter a start time.

However I have a card that shows tasks, and some of the default data in that card are items such as how long a task took, and the start-time and end-time.

How would I go about showing these missing numbers to users?

Give the user an indication of exactly what's missing, and a chance to fix in close proximity.

You don't have a mock, so I took a shot at a card with info that might be relevant.

I used the phrase 'not set' when displaying the hours, and a link to fix where the total hours would normally be displayed (see the Completed card to the right).

'Not set' implies something not entered by the user, and the link is a prompt to fix exactly what is missing: 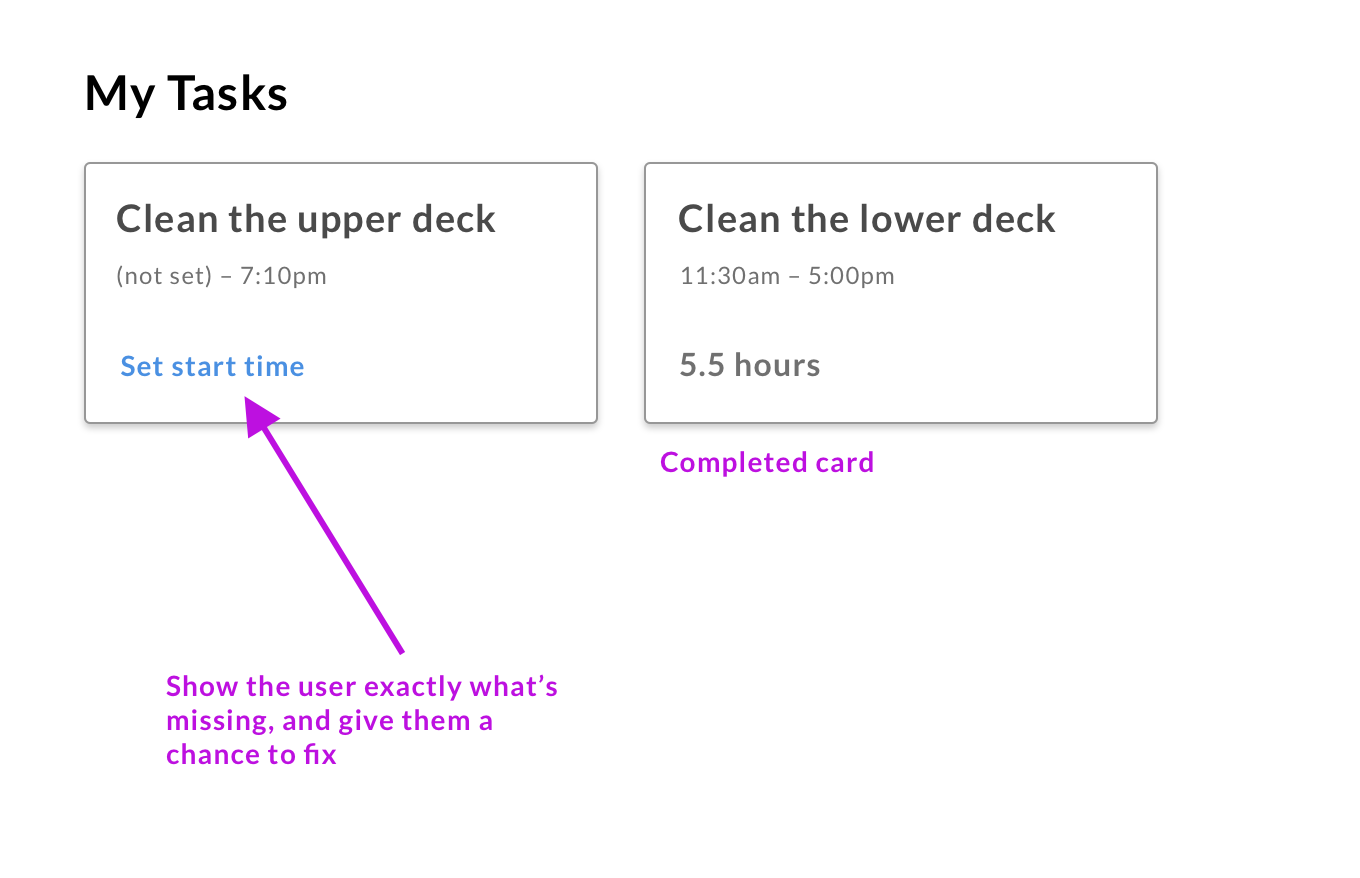 Firstly, something to note -

A zero data world is a cold place. When first time users look at your app and all it does is show a blank slate without any guidance then you’re probably missing out on an opportunity - goodui.org

I think it depends on whether your tasks can be modified at a later time? So if it is empty at this time, but sometime in the future, the user has the ability to edit the task numbers, then I don't think it will be a good practice to say 'N/A' which is quite subjective and does not explain the issue to someone who reads the task.

You could instead use more understandable placeholder texts such as 'Enter Start Date', or 'Insufficient Data'. You could even use colors to indicate States, for example, if the row is valid then a light green background or if the data is insufficient then you could apply a light grey background.

The idea is to not leave someone guessing and assuming, you should be able to make it clear what the issue is.

Not the answer you're looking for? Browse other questions tagged usability interaction-design human-interface-guideline or ask your own question.

8
Displaying information in a dashboard: Advice or references
2
How to report outcomes of a background task to users?
1
Expert consultation request: Best solution for multiple choice and pricing of large number of products / services
3
Wait cursor and progress showing time for long running tasks
3
Informing user how to delete list item
0
Challenge: I want to assign a task to a user with dependencies
2
How to calculate user interface's efficiency time
3
How to prevent accidental button press?
0
How to make is look like results have updated?