How should regular black text change to show that it has become editable?

I am building an app to be used on Android phones. The main purpose of the app is to display information, in the format of a form, to the user. Several fields of the form are to be manually filled in by the user, but after the first time it should be rare to change them.

Right now I have a button the user can press to allow edits, and then the same button can be pressed to save changes. The text is normally black but when it’s editable it turns blue.

Is there anyway it can be more clear that the text is editable? I tried gray but then with such a light color it was hard to read the text. The blue is ok but it looks like a hyperlink and people don’t usually associate blue with being editable. Also I want the editable text to be easily readable, so people can see what they're typing in, and because only a slight adjustment may need to be made.

Here is a fictitious example to help illustrate what I'm talking about. When the "edit text"button is pressed, some of the items in the right column become editable, such as the phone number (but not the date as that's auto populated). How can it be shown in the UI that the fields are now can be edited? 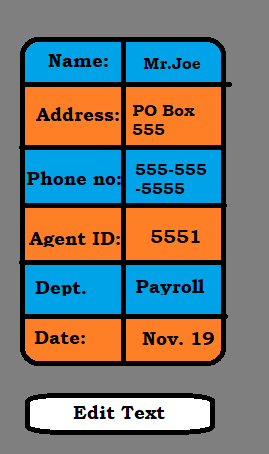 Text inputs on the web usually have distinct looks. Inputs and text areas typically look like they some some "depth" to it. You can try do add some borders or outlines to make it obvious that the element is now focused. This is commonly found in some CMS frontends, is not very intrusive and lets you preview the result by default.

This also works well for tabular data. I would possibly remove any colors from the background and text to make it look more "raw", but the border when editing is a common pattern. For an example, see Excel or Google Spread sheets: 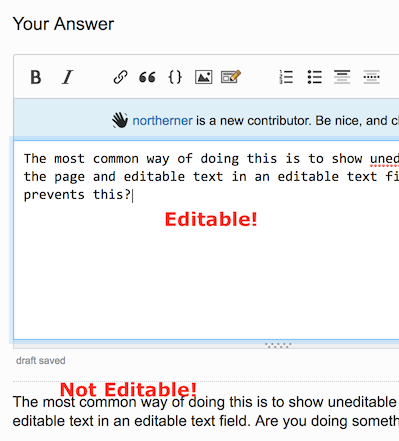 Not the answer you're looking for? Browse other questions tagged forms gui-design color text app or ask your own question.

4
How to design a form that mostly is read-only, but sometimes editable?
4
Edit button or editable nodes?
3
Designing a "create" UI for a complex "object" in a system
5
Which browsers allow users to reveal passwords in password fields?
3
iOS pattern for editable vs read-only fields
1
Making it easier for users to fill out form on mobile apps
2
Material design change password behavior
1
What is the best way to show additional information on a single word in a block of text & how should the user know about it?
2
How to suggest to users that they may need to change one of their email addresses from the default?
2
How to inform the user that some data will change value after they hit 'Save' button?