I had read some article that we shouldn't use auto slide carousel in website but I have question on Facebook messenger platform since many ppl use carousel to present menu to user. Should it auto slide to make user know that it has many menu or it shouldn't slide ??

Auto-scroll / auto-advance is probably inappropriate for a Facebook Messenger carousel UI component. I’ll get to why below, but first some context...

In the comments below your question you added some important context: a UX critique of traditional website carousel sliders (Fig. 1) and a link to Facebook Messenger developer documentation for a carousel payload template (Fig. 2). I’m including screenshots from those pages below for context.

You are correct that recent UX articles discourage designers from using carousel sliders (Fig. 1) on websites. Common criticisms are:

The Facebook Messenger carousel of generic templates (Fig. 2) is a different kind of carousel. It is very similar to carousel style advertising elements that appear in the Facebook mobile app. The intent of the Messenger carousel is to allow a user to scroll through a menu of up to 10 closely related options or purchases, for example a set of t-shirts available in a variety of different colors.

Why Auto-scroll is Probably Inappropriate

Since each item in the carousel is interactive, auto-scroll is probably inappropriate. Auto-scroll requires the user to learn the speed of the scroll so they know when it is safe to tap the button. That may be fun in a game, but not in a shopping experience. Using the t-shirt shopping example, Auto-scroll could cause a user who intends to pick a grey shirt to tap the blue shirt if the carousel advances while the user is in the middle of tapping the “Shop Now” button. Imagine how much frustration that might cause as the user has to figure out how to remove the unwanted item from their cart. The sale might be lost.

Google’s Material Design guidelines have a section covering scrollable tabs, a related interaction pattern that is worth reading about. Google talks about two overflow patterns when there are more tabs than fit on the screen: allowing a tab to peek and showing a more arrow. It may be that Facebook’s Messenger platform handles this sort of hinting for you or that you, as the developer, can force some sort of hinting. A “peek” hint might look like Fig. 3 below where a full message is shown and a slice of the next scrollable message peeks from off the page. 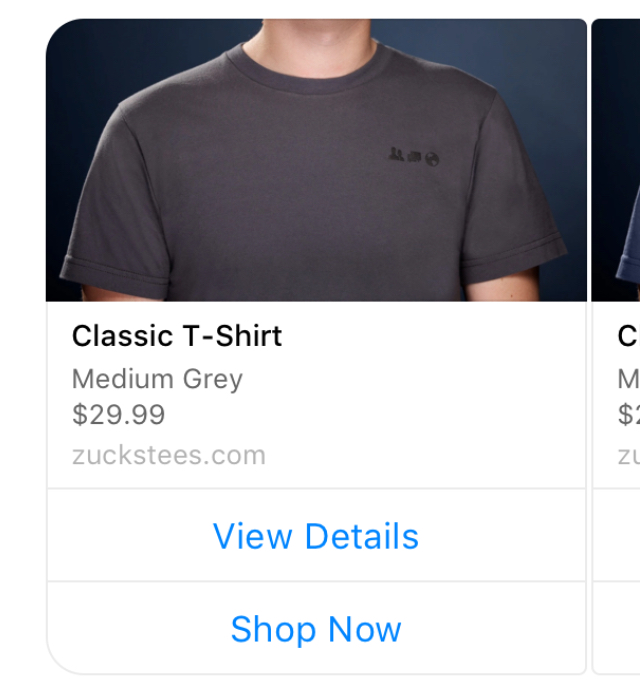 A visual indicator like a more arrow may also work.

A quick animated bounce when the carousel is first rendered might be used to show the UI component scrolls horizontally and might be visually fun. The animation might repeat until the carousel is scrolled for the first time.

Not the answer you're looking for? Browse other questions tagged facebook chat carousel chatbots or ask your own question.

2
Mutiple or single hyperlinks within a carousel slide?
5
Should an image carousel on a mobile site automatically rotate?
5
Should Carousels auto-scroll?
0
Add button as part of a custom carousel menu
1
Carousel - To have or not to have images on slides
0
Using a carousel pattern to display a set of questions
0
Chatbot response on wrong user input
3
What is more effective to promote new features on a website?
4
Content slider / carousel accessibility best practices?
1
Tips for mobile product Carousel for gallery of a single product, or should I use it at all?