Recently I enrolled to HCI course, and there was mentioned that WIMP (windows, icons, menus, pointer) is a token-based interactive system. Does anyone knows what does token-based mean in WIMP system, since "token-based" was implied, because nonWIMP is (I guess) seen as non-token-based.

Well, WIMP is a very old term, I'm a bit surprised it's still in use.

Anyways, you could say most digital systems using graphical interfaces are WIMP. As a matter of fact, the term used to replace WIMP is GUI.

With that being said, a token-based interactive system is a system that reacts to an user token (interaction). See an UML diagram below: 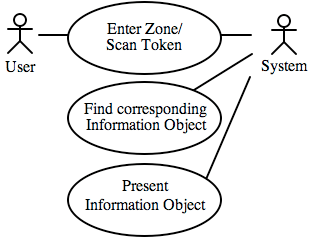 In this model, the system reacts in 2 ways: token-based or location aware.

As the name implies, location aware means the system reacts to user's location in an automatic way (for example, maps or apps that read your location).

In opposition to the above, token-based requires some specific interaction which results in a token sent to the system, hence the name.

If you need more information, you can read this research paper with examples (from which I extracted the UML model): Formal notation for modeling location-aware and token-based interactive systems

Not the answer you're looking for? Browse other questions tagged terminology hci or ask your own question.

2
Research on more effective search systems based on Human–computer information retrieval?
10
What is Opinion based and fact based?
1
Looking for a HCI term for when a system has several modes of operation
4
How to integrate word prediction keyboard into P300-based BCI (brain computer interface) system?
1
What to name a system
3
What is meant by “system image”?
0
Is there a short/common name for form-based user interfaces?
0
What to name to the “body” of a software application
5
Live/interactive elements in browser tab bars
2
What is system-centered design?