How to present a tree in which objects may appear more than once?

I have a window showing a number of objects that can be individually hidden or recolored. Accordingly, in a sidebar each has a checkbox and a color swatch that launches a color picker when clicked: 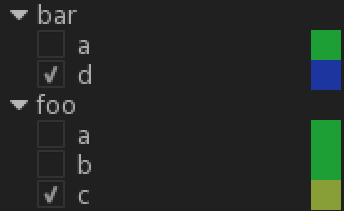 However, as shown, the objects also occupy a structure that resembles a (Unix) filesystem: the user has organized them into groups ("directories", but not nested), and each may have more than one name in the same or separate groups. No name or group is privileged or canonical. (The number of groups is almost always 5 or fewer, likely with no more than 25 entries each. Any one object probably has no more than 6 names in total.)

Thus the groups and the names of the objects form a tree that is important to the user, but adding the objects themselves (as "children" of their names) weakens the structure to that of a DAG. The rendering is of the objects, so it is meaningless for a single object's various names to have different colors or visibilities.

What controls can I present to the user that

The example image shows one simple strategy: a in group bar and a and b in group foo are all the same object, while two other objects have just one name each. The layout certainly satisfies #1 and #3. However, #4 isn't good: clicking any of the three checkboxes for the shared object must update all three (and similarly for the colors). Moreover, this sameness is only reliably detectable by interacting with them (so #2 is not met); it might be mere coincidence that they have the same color and checkbox state, and the same name ("a", here) might or might not refer to different objects in different groups.

Note that no editing of the structure or names ever takes place; this interface controls drawing the objects and is not involved in creating, deleting, grouping, or naming them.

Not really convinced, but you could try a table layout: 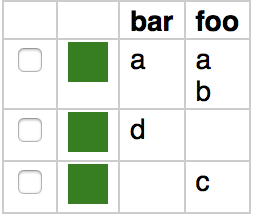 Each row is for one underlying object. Each column is a group.

Of course, this means that as the number of groups gets larger, you need more width.

I'm not sure that a tree is the right visual structure here. You're right that a tree implies a DAG, and what you have here is a collection of objects with attached tagging data.

I don't have a concrete solution to show you, since there are a whole family of solutions to the problem "How do I show tags against a set of unique objects", and I don't know which one best fits in with the rest of your UI.

I'd perhaps go with listing the objects as their own ui element, probably as a product card, with an inset colour swatch that opens a colour picker. You could then show each name and directory as a separate "tag" along the bottom of the card.

I'd also probably extend the ui to include a "tag page", so the user can click on a tag and see all the objects in it, each as their own product card. That way they can navigate the collection either by name or by directory, but will initially see a collection of unique objects as product cards.

Not the answer you're looking for? Browse other questions tagged gui-design layout color desktop-application tree or ask your own question.

5
How to search/filter long lists that incl. tree structure and flat structure?
4
Applying the Windows UX Design Guidelines for Layout and UI Design consistently
6
How much darker should yellow be get the same contrast as other colors?
4
Assigning to multiple groups
2
Group rows in a table
4
Color coding a lot of major sections inside a website
1
How to choose the best type of controls to use in a toolbar?
2
Should variations of a color, within a color palette, only consist of tints and shades of that color?
29
Colorblindness-friendly colors called "green", "blue", "yellow", and "red"
0
What is the best ease curve and speed for color transitions?