Does it make sense to have a Back button on Step 2 of this particular wizard? 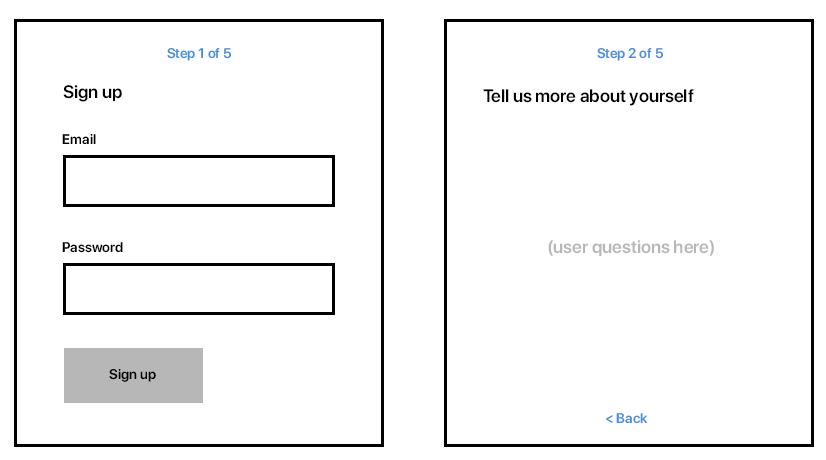 Step 1 of this wizard must be a Sign Up form. In Step 2 and the rest of the steps, we list down some questions to ask the user.

In Step 2, does it make sense to have a Back button?

My thinking is that in wizards, we should always offer a way for users to be able to go back to the previous step, but does that make sense in Step 2 in this particular scenario where Step 1 only contains a username/password?

One option is to start the first step after the signup form, but that may be a deterrent to some people (ie having to signup first before they can do anything else). However, if we label the signup form as the first step, they may see that there are only 4 remaining steps so it may be less of a deterrent (ie it only takes 5 steps so I may be more inclined to sign up)?

In a sign up process you want the user to be able to back track as much as possible. If, as @maxathousand mentioned, you go all the way to step 5 and then realize you want to change your email address, or maybe even the password, then, without a back button I'll have to restart. That is, obviously, not good. Your views need navigation otherwise you will frustrate your user.

No. There is not reason to go back. I am assuming that Step 1 presents a success message once complete and that if I abandon and come back I see whatever step I left off on. I would expect I could change my signup details later in a Profile setting somewhere.

My default "starting point" is that – if you are already supporting a "wizard" interface (i.e. the ability to "remember state" while allowing the user to go back-and-forth as they like) – then there's virtually no extra effort to include the first screen in that process, so you may as well do this.

From there, a key factor is when you validate the email address (assuming, as it appears from your mock-ups, that you are using this as the primary "user identifier"1). If you are checking this as the user attempts to leave the first screen (and prevent them doing so if the address is already in use), then there's no extra reason to include the first screen in the "wizard sequence". However, if you do not perform this validation until the user has completed the whole sign-up sequence, then I would say it is vital that the user be able to return to the first screen to amend their email address.

In passing, as I noted in a comment, whether or not you include the first page in the "wizard sequence", if you are not actually triggering the "sign up" process until the end of the wizard, the button on the first page should be Next and not Sign up.

My last point may make much of the above obsolete. You say:

One option is to start the first step after the signup form, but that may be a deterrent to some people (ie having to signup first before they can do anything else). However, if we label the signup form as the first step, they may see that there are only 4 remaining steps so it may be less of a deterrent (ie it only takes 5 steps so I may be more inclined to sign up)?

You are right to worry about "having to signup first before they can do anything". People do dislike extended sign-up processes; partly because it takes "too long" and partly because they increasingly dislike sharing potentially personal details with all and sundry. This is especially true if they are not yet committed to your service and ideally want to "look around" to see if it is right for them.

As such, a growing recommendation is to require only the absolute minimum of information during the sign-up/registration process – the stuff that you genuinely cannot do without to give them (at least partial) access to your site.

Once they have got past the mandatory stuff, and can start to see your site, then you can prod them (so long as it's not too intrusive) to fill in more of the details you will be asking in your five-stage wizard. Things like "tell us more about yourself" definitely fall into the "not initially needed" category.

Depending on your site, and the details you would be asking in the rest of the wizard, it might be that users cannot access all of the site, or use all of its features until they've added more details: that's fine – hopefully they will see the benefit of your site and will now happily disclose those details when they may have been reluctant to do so during an extended sign-up.

1 In passing, I've seen several people here argue against using an email address as the "primary identifier" as it can make things more complicated if a user wants to change their email address.

Not the answer you're looking for? Browse other questions tagged gui-design user-behavior ux-field wizard ux-integration .

9
Is it intuitive for a "yes" or "no" button to proceed to the next step automatically in a wizard?
1
How can I make this step by step booking process more seamless?
0
Is it a good idea to make the forward button of the browser go to the next step?
1
Should I disable or hide the Back button in last step of Wizard
4
Wizard UI - empty steps
1
How to decide whether wizard stages should be split or united
4
Does it make sense to put a back button on first page of a wizard?
0
Back button in wizard
1
How will you manage this step inside a wizard? Hard level: external plugins and valid signatures certificates needed