I noticed on Office 365 applications and the Office 2016 applications that there is an Autosave feature (which I believe was started in OneNote). 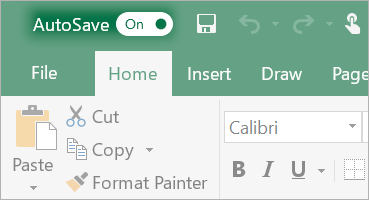 The official explanation of how the feature works (or rather what it is), according to the Microsoft site is as follows:

"Save early, save often" is now a thing of the past. Now there's AutoSave which saves every few seconds so that you don't have to.

AutoSave is enabled when a file is stored on OneDrive, OneDrive for Business, or SharePoint Online. It automatically saves your changes to the cloud as you are working. And, if other people are working on the same file, AutoSave lets them see your changes in a matter of seconds.

Based on the explanation by Microsoft and how the UI is presented, is there potential confusion for the user or is the design clear enough to suggest how it will be used?

If you look at them it is not a mixed behaviour per say. They are just ways to accomplish one task in a slightly simpler manner.

The intention behind AutoSave is convenience for saving data. If it would have been something like AutoSave creates a new file and Save just saves it then it would be mixed behaviour and it would kind of be crappy in terms of usage. From my experience on UI/UX design, to a user it seems to be pretty clear about the functionality of AutoSave. Not specific to an application but in general.

So the next part, why would AutoSave be just for OneDrive. That is kind of wierd to me as well. May be a marketing strategy for OneDrive/SharePoint or may be a development breakpoint. Not sure though, could be anything. Because when I see AutoSave I expect it so save locally without me saving it explicitly and not require any OneDrive connection or anything of such sort. That is unclear to be honest as to why this is the way it is built.

Update: As from the perspective of a user, may be once autosave is enabled, a small indication at the bottom left or bottom right saying "file autosaved" would make a huge difference since the user would then be able to completely relate to the autosave functionality and understand that the file is being saved and safe. And of course the option of autosave should be showing up in the menu. If let's say it's disabled, the same bottom right/left spot could be used to say it's disabled or probably show nothing there. Not the best suggestion for indicating disabled autosave state but it could be a start

Hope if not the answer I could help you get close. Thanks!

Some users seem not to trust auto-saving, so an an explicit 'save' button can help give them assurance that their work is definitely being saved. We've built a few auto-saving system and have observed this in practice. You can also help to reduce this effect by making it clear when their work has been auto-saved. E.g. showing a subtle success message every time it auto-saves.

To clarify, we haven't observed this concern much in younger audiences. We build custom web apps for organisations and found that without an explicit save button the less computer savvy staff (often older) are more anxious about losing work. This concern seems to have disappeared since we started always adding a 'save' button as well. This isn't something we tested quantitatively so I unfortunately don't have good stats on demographics for this. Our conclusions were drawn from support questions and user conversations.

I think that if you utilize the following:

These three combined I would say is sufficient enough and is easy enough to understand for everyone.

Another great thing to have then is the ability to "go back" even if you only save the changes locally in order to save space on server-side.

EDIT Alright I'll try to elaborate with some screenshots.

This is a confirmation that the document has been saved.

But take this scenario for example of people who might not trust this auto saves.

People who work writing documents might be traveling, sitting on a train or something. They don't want to rely on an internet connection for stuff to be saved.

I would instead always save a local copy no matter what and then try to sync it as soon as the connection is up and running again. 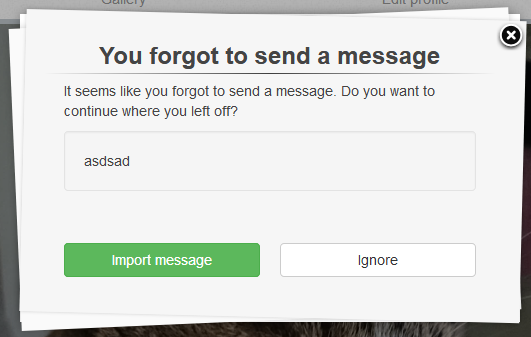 It's basically telling you that wrote a message without submitting it; asking if you want to import it again (not send it; since you might not have been finished) OR ignore it.

I have no statistics to back up these cases; but from my own perspective I quite like it.

I got the idea from Google's Auto save and Facebook's (I have no screenshot since I don't use it anymore) message telling you that you have one unsubmitted message when you're trying to close the window if you have wrote something without submitting it.

It's Microsoft office - everything is confusing as hell. I much prefer the way this is resolved by Google Docs.

1) Shows current status of the file on the screen all the time(Saving or Saved) with a link to the version saved. 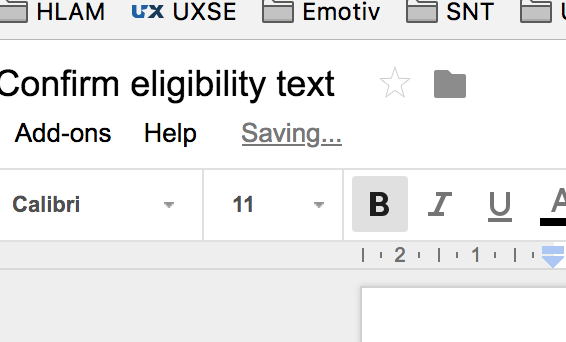 2) When looking at the File menu there isn't a confusing Save option! instead user is offered to:

which in my opinion covers all necessary use cases without extra clutter or confusion.

There are two parts to it:

1. Autosave is the default option and always on: In my opinion, this is the best option when used with frequent auto disappear messaging "Changes Saved" without obstructing the workflow. This introduces the feature since our brain is wired to save things and still save. Messaging on a regular interval educates and changes this behaviour.

2. Users have the flexibility to toggle: This allows users to switch the feature off if they are experimenting with the file and don't want work to be autosaved, this is good for those specific users. But if you would try and find the count, I think the number would be less for this behaviour.

Here is an example from Sketch tool: 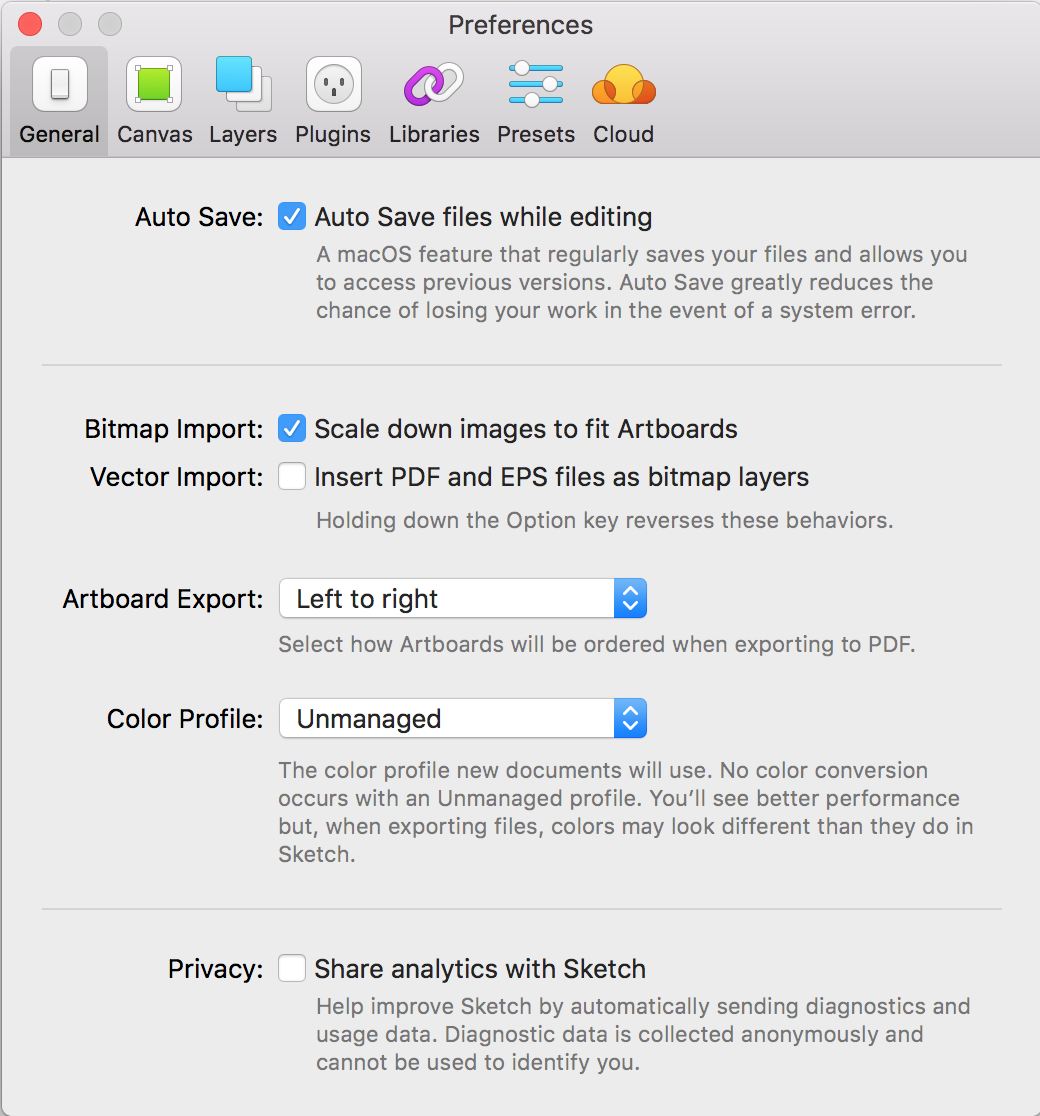 Not the answer you're looking for? Browse other questions tagged web-app desktop-application save autosave or ask your own question.

17
Save vs Save & Exit
6
When is an auto-saving form appropriate?
7
Accessibility for non-web desktop applications
1
How do you measure performance/success of web based applications?
2
Form with both save and submit buttons
7
Are Save buttons still necessary in web applications?
0
What behaviour is acceptable for checking data back in when a browser window is closed?
2
How to clarify function of save button? 'Save and close' vs 'Save and exit'