Design for skip vs next when next requires waiting

I have an app that serves users content which requires them to say whats on the screen. They can move on to the next piece of content only after some period of time depending on the length of the content (usually 5-10 seconds but it can be as long as a minute)

They are also given the option to skip to the next piece of content, the difference being when they click next we save that as being said and when they click skip its basically ignored that they even saw it. We later provide them with statistics on how much they said and other users (who loaded the content) can see how many people used their content.

I showed this to someone and they said its too ambiguous and not obvious what the difference is. I have a help icon that explains the screen at the top, but based on their usage I could tell many people would never bother to click on it. (I suggested maybe we could put a countdown to when Next becomes enabled but they thought that it still wouldn't be intuitive what it was counting down to)

I thought about removing the skip button and only putting in the next button. I would then judge whether it is a 'skip' or 'next' behind the scenes based on how much time was spent on it.

However, the reservation I have with this method is that it is hiding how it works from the user which can mean that they can be confused when they look at their statistics and it seems to be way off (one option to fix this is to have next to the statistic a button saying "My stat is not accurate" or something like that)

Is there a better way of doing this?

This is a basic mockup of the screen (its for mobile) 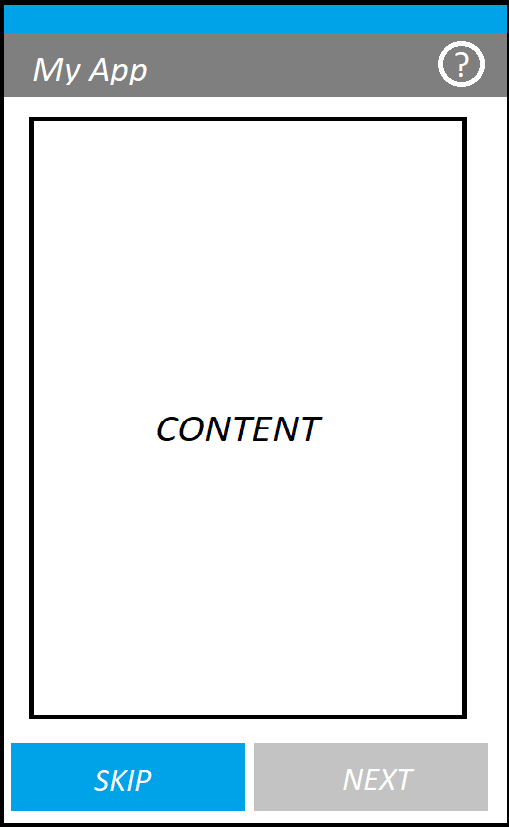 From clarification in comments, you essentially have two actions you want to let users choose between:

Providing the religion concerned has no negative connotations with the concept of "skipping a prayer", then I would say Skip sounds fine for the first option. If skipped prayers may be shown again later in the same "cycle", then another possibility would be Not now (somewhat implying "but maybe later").

For the second option if Next is felt too ambiguous (perhaps because it doesn't affirm that the user has finished reciting the prayer), then perhaps Spoken or Prayed may work?

(From a strict "user experience" angle, mixing the imperative Skip with the more passive Spoken/Prayed may be frowned upon, but it may work for you / your users).

Another possible approach: does the religion concerned have a word or short phrase (either in English or its "native" language if not English) that means something like "I have prayed", "I have spoken" or that is traditionally spoken at the end of a prayer?1 If so, that word or phrase may work for the button to be pressed when they have finished reading the prayer.

1 I'm slightly cautious of making suggestions, since I realise some religions have restrictions over what can be said/written in certain contexts, but one example of the kind of thing I'm suggesting – that I hope is "safe" – would be Amen, which this Wikipedia page says is "found in Jewish, Christian, and Muslim worship as a concluding word or response to prayers". There are probably other candidates for these, or other, religions.
Share
Improve this answer
answered Jul 18 '18 at 15:06

Not the answer you're looking for? Browse other questions tagged mobile disable or ask your own question.

3
Selecting a folder in a drilldown / column view
1
Information Architecture and Navigation
2
How to step outside one's own "perception bubble" when doing UX/Design?
0
Moving onto next step when a selection is already made on mobile app
3
iOS pattern for editable vs read-only fields
0
Creating a profile using a wizard on mobile
3
What is the rationale for google analytics removing icons next to bold numbers?
1
How to show the user multiple options and make sure they understand they don't have to choose one
1
The placement of Next button in app for warehouse men
0
Navigation between steps on mobile form wizard, automatically or scrolling to "next" button?