How to display a mnemonic phrase

I am currently working on a app that has to display a mnemonic phrase.

A mnemonic phrase is a list of 12 words that act as a seed for a private key.

Since the mnemonic phrase essentially is the private key, it needs to be displayed in a way that takes into account privacy, security and clarity.

Ideally, the UI of this app should offer some guidance or information, conveyed as simply as possible, about the mnemonic. For example:

I am not sure how to design this display mnemonic screen.

Here are some of the thoughts I have relating to this.

What are your suggestions for a good UI / UX design of a display mnemonic screen?

I hope that i got it right and created a small wireframe with my idea. I would definitely make users confirm that they have saved their phrase. Of course you can add a sentence where you say what the phrase is for. 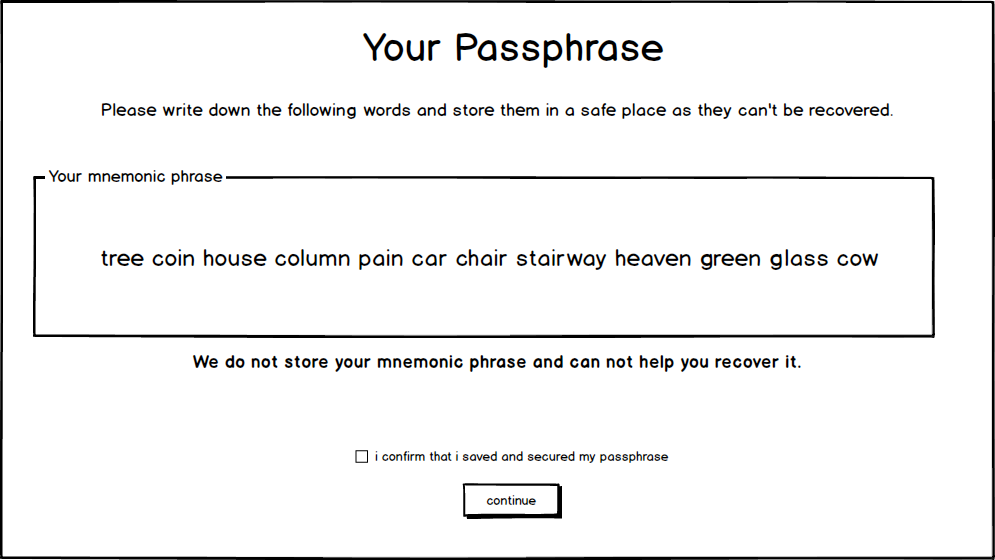 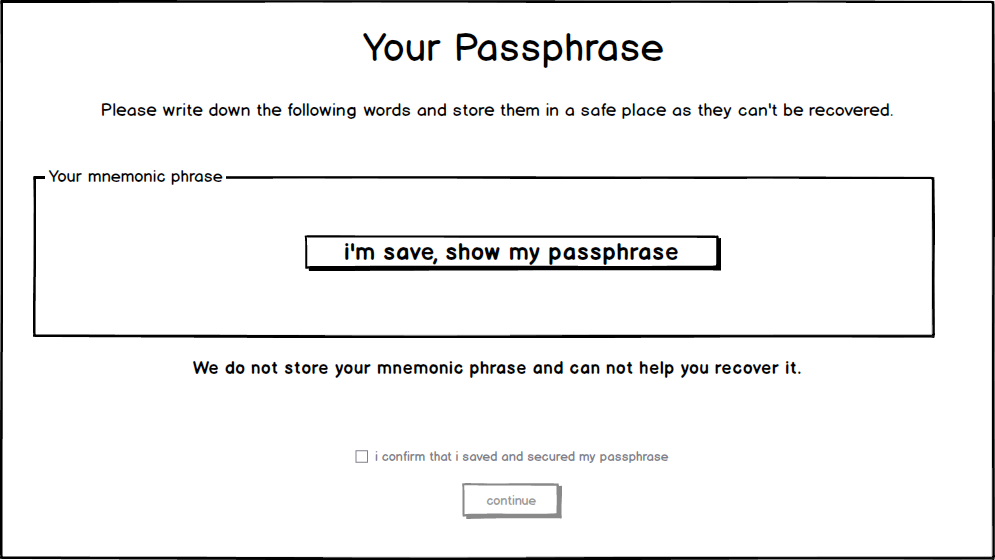 Some great ideas have already been chatted about above, but I would think of users with visual disabilities and how they would interact with this screen - would the words be read aloud? Saved in a different way? How would they know to reveal the pass codes? (This is a problem inherent with wallets in general.)

Also, if people are prone to taking a photo, they are going to find a way regardless. A screen or messaging beforehand to make sure they are not being overseen could help more - and a quick additional step would reinforce the importance of what a user is doing, especially if they are new to the tech and the space.

Would hesitate to use "danger" cues - it's not dangerous, rather a matter of high security and I think there are subtle ways to distinguish this. Deep blues and whites tend to give a person a sense of security, rather than reds, which is alarming and you don't necessarily want to cause a user to be worried, just aware and secure. Depending on how the rest of the app looks, I would go for a minimal, "Focus on what I'm saying" design. More importance on hierarchy of font, so a user knows what is important, and a sober color scheme, compared to the rest of the app. Make the box with the pass code clear and viable.

Do you have the ability to link to further explanations of what a pass code is and further information to help a user who may be new to the space and the tech? Will you have clear information that this is NOT a password, this is even more important? Depending on your intended audience, this is a new security thing in a new tech space for most people, and a bit of hand-holding clear language never goes amiss.

Not the answer you're looking for? Browse other questions tagged website-design design-principles usability or ask your own question.