What is this chart type?

I was reading the article Marketing Analytics Is Broken. Salesforce Is Fixing It With AI (And IoT) on Forbes and I was wondering if anyone could tell me if there was a name for the type of chart they are using on the Salesforce Marketing Cloud dashboard. It is the one the blue lines and its intersections look a bit like highway on and off ramps? 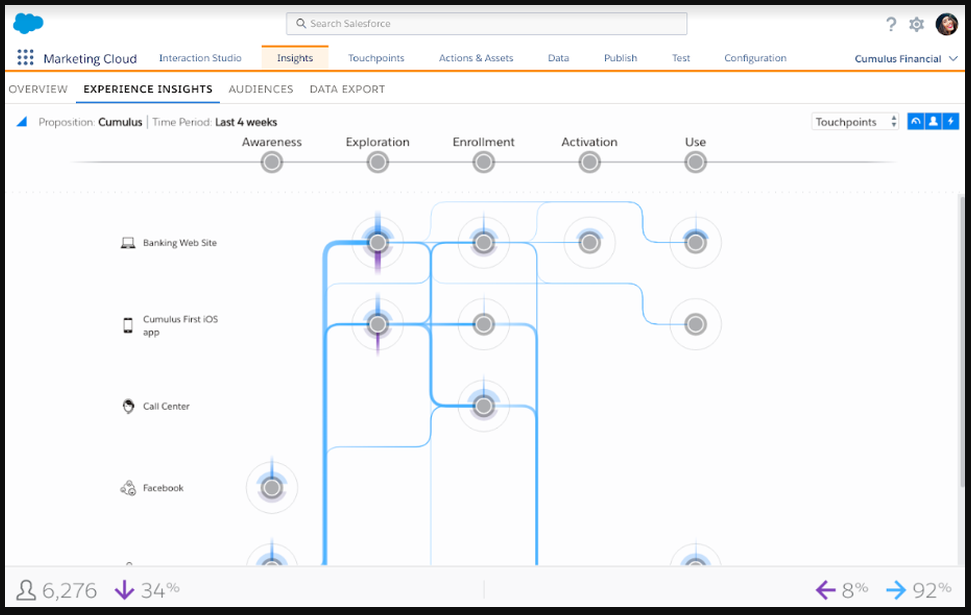 Nevertheless, I think the kind of data visualization that it provides is closer to an archetypic user flow rather than an interaction diagram, which is more related to the process and architecture on your own side rather than others (this can be discussed ad infinitum, because you can say Facebook is an actor in this model and you would be right, but to make things simpler)

This diagram looks like a hybrid between a Sankey diagram and a user flow/interaction diagram (but for an omnichannel flow/process) but modified with a few fancy elements that seems to represent some things that I don't really know too much about. It seems to also indicate where users drop out so that's similar to a user funnel analysis that you do for sales/marketing conversion.

However, the intent of the diagram is clear (enough). It is trying to show the flow of how a user goes from being aware of a product to adopting it (as indicated by the stepped progress bar at the top, and the interaction that happens between the different channels (the matrix in the middle).

You could try to label it as a mashup of a few different types of diagrams, but it is probably easier to just say that it is a customized (interactive?) visualization of the user adoption funnel across multiple channels (which is still a mouthful :p).

Not the answer you're looking for? Browse other questions tagged usability charts or ask your own question.

7
Can this chart axis labelling be improved? (Showing zero in histogram)
4
Best Type of Chart for Numbers inside Matrix?
2
What is the best chart type for present, “track of orders or order status”?
0
Best chart type for giving smallest value greater importance
4
What type of pattern is this called?
1
Is it a 'vertical bar chart' or 'column chart'?
23
What kind of chart is this?
3
What is this line referred as in a chart?
2
How can I improve the legend in this line chart with value, norm and prediction?