I'm working on an interface that allows students to find study spaces on campus, including filtering (faceting?) those spaces based on different categories. Current feedback from both usability testing and critical stakeholders is conflicting on whether people expect, after choosing some filters, to always see an intersection of results (spaces that are simultaneously A and B) or see a union (spaces that are A + spaces that are B) or a mix depending on the filter categories chosen (I actually don't think anybody is expecting a union for all cases).

A note on the options within the categories

Some of our categories have options that are mutually exclusive to one another (e.g. no space is simultaneously in two buildings) and others that could be overlapping (a space can have both PCs and Macs).

(In our case our categories are currently: "Type of Space" (we've decided to designate spaces as only one type at a time, but that may not be abundantly clear to the user), "Noise Expectation" (same), "Amenities" of the space, "Tech/Equipment included, "Furniture" in it, and "Building" it's in.)

Some people always want/expect an intersection, even if that means more frequent "no results found" cases. Others want/expect the ability for an "I'm willing to see spaces that are both A and/or B" case, at least within certain categories. (And we haven't even gotten around to thinking whether certain inter-category selections might be considered differently.)

Our first testing and discussion was based on an interface that didn't really distinguish options based on anything but the semantics of their category. To test clarity of giving union results for categories with mutually exclusive options, we've since done a little more work trying to distinguish the selection mechanism (checkboxes in addition to on/off switches/toggles (while still avoiding radio buttons because of the difficulty/clumsiness of including a way to unselect them)) as well as icons in the categories that allow overlap, like this: 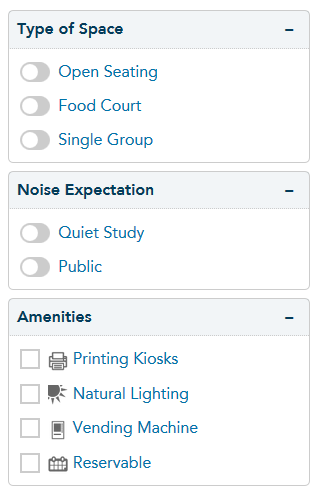 It hasn't really clarified things for users tested so far, so we've discussed other possibilities such as reversing the selection mechanism (switches/toggles on overlap categories, and checkboxes for mutually exclusive categories (that would hopefully uncheck if you selected a different intra-category option)), further visual distinctions (different header colors; some categories in boxes some not; etc.), adjusting the grouping/ordering of the categories relative to one another, seeing whether this is influenced by what's reflected in the result listings.

It's also unclear whether we're affected by this being a kind of unconventional thing to filter. People bring up certain online shops or travel sites as points of comparison, but everybody's bought things and booked online before. Categorizations of study spaces are perhaps a bit more ambiguous.

Perhaps there's no one-size-fits-all to this kind of problem, and maybe will be different for our academic site vs. an e-commerce or even different for the same user on one day vs. another day depending on what they're looking for. BUT, I have been tasked with researching this problem (or seeing "how other people do it"), and it's a bit difficult to Google for.

(And my apologies that this question is not too straightforward but rather more like: first, which direction do we go, and second, how do we design to best alleviate/convey things for users who expected the opposite direction.)

It would be great if people had design/implementation ideas to try that we hadn't thought of or considerations that perhaps we need to take into account. HOWEVER ...

What would probably be more helpful to me is research that has studied what users most clearly respond well to for this union/intersection/mutually-exclusive-or-not issue (we're a bit limited in both time and budget to continue usability testing on this forever). I've found some research out there that's tested many aspects of filter/browse/search interface design, but not quite this one (at least yet ... that might say more about my Googling skills / knowledge of the precise terminology needed).

Expert opinions might be also by handy, but I'm also up against some important stakeholders with very strong opinions of their own. :-/

Intersection and union are technical words. Thinking at this from users' perspective, the problem is within "must have" criteria and "nice to have" ones. Users will have different priorities for each criteria, so they will always have different expectations on the behavior of the UI.

I would make the choice between "must have" and "nice to have" explicit for each criteria, with a 3-state toggle. Unselected would be by default in the center, with the other choices in either side.

I found the filtering system in Jira is a combination of search, filter, and/or exclude. When you search for tickets, or projects, or people, or keywords, it allows you to have a granular control on what you are searching for.

I understand that it might look a bit overwhelming, but perhaps they have an implementation that can inspire you and put you on an uncharted path.

This is their documentation: https://www.atlassian.com/blog/jira-software/jql-the-most-flexible-way-to-search-jira-14

Try to see if you can apply this level of granularity in search and display in a more user friendly manner (namely: visually rather than typed as a query).

I hope it helps.

Not the answer you're looking for? Browse other questions tagged user-expectation filter checkboxes toggle or ask your own question.

19
How to indicate a table is missing rows that have been filtered out?
0
Set operations on two search result sets
1
Toggle-Buttons mutually exclusive and multiple selection combined
2
What is better : Disabling sub-categories or auto resetting the filters
7
Category filter using checkbox, tag or most popular?
3
Product filters - how to explain to the user if they are inclusive or exclusive
3
shape used for checkboxes
3
Using filtering and search on products
2
Filters applied overview - how to distinguish filters with the same name