Suppose we have a vote widget. There are four possible options:

Every person who votes can pick one of those. We could also add an additional category of people who are required to vote, but haven't yet.

We might have four votes. For the purposes of the mechanic, "neutral" contains the sum of those who have abstained and anyone who's yet to vote. The results of which are below:

The last result is undetermined as, if all neutral parties voted against it, it would not pass. In vote 2, even if all neutral members voted for it, the result would still be "against". In all cases, any veto automatically results in it the vote being against.

The person may view this graph before all votes have been cast. We want them to know:

The question is, what's the best way to visualise those results so that the mechanic is clear? For bonus points, what if we required a certain threshold (for example, a minimum of 70% voting for an option).

forms info-visualisation graphs voting
share|improve this question
asked May 3 '18 at 9:40

I like what CNN had done for the 2016 presidential elections. You can use a bar and have for on one end and against on the other. The neutrals will stay on the against side. If a vote has been vetoed in that case you can say the result is against stating the reason that the vote has been vetoed. In addition you might want to explain why each vote resulted in the said result. This would make it clear to the user and won’t have to refer to the rules all the time. 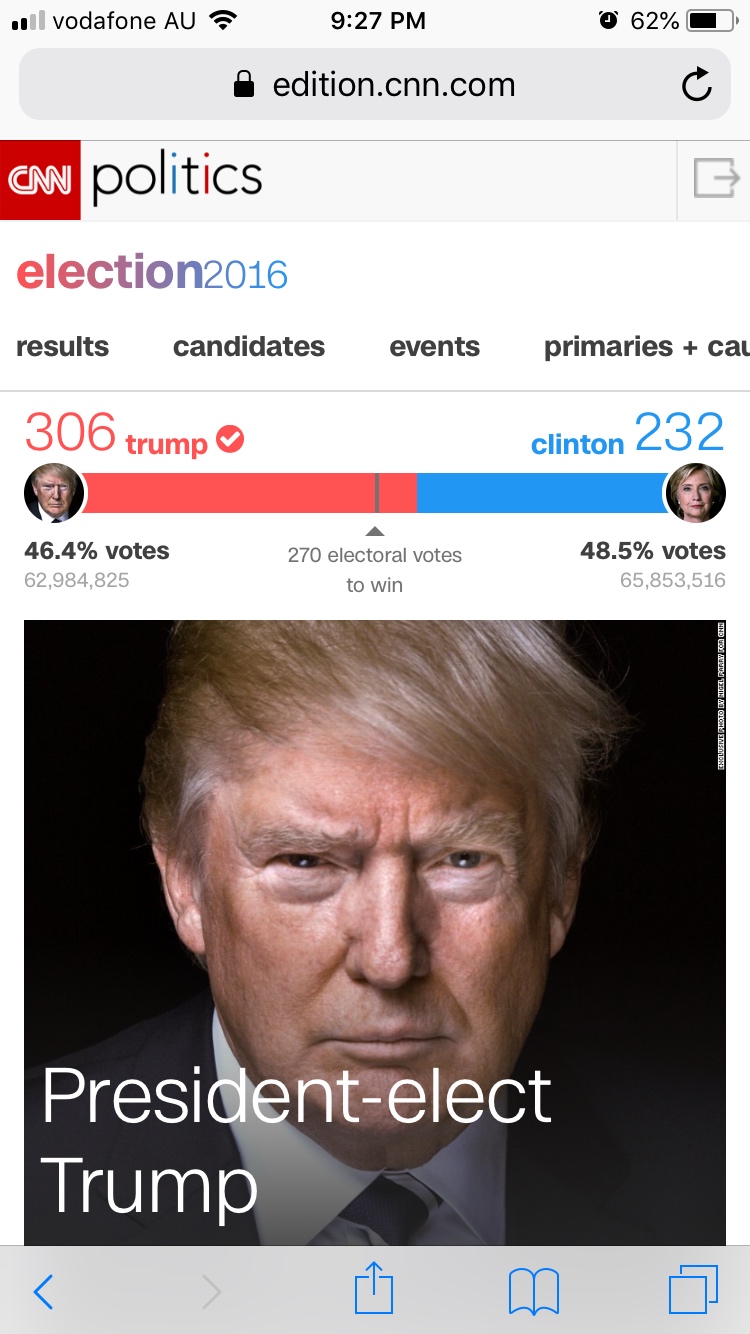 Let me know your thoughts.

First of all I'd clearly state all the rules concerning the voting. Normally if someone does not vote, their votes are neither assumed nor spread between cast votes. In this case Vote 4 result is for (10% don't mind the result, 30% kept quiet despite having their chance).

Second of all - a veto option is very strong tool - it's enough if only one person of the whole population (it may be 10 people, it may be thousands) is against for the proposal to be stopped. Think about Liberum veto in the 17th and 18th century Polish-Lithuanian Commonwealth and how it induced anarchy in the political life of the country and led to their decline.
Unless your voters are considered experts in certain field and a particular person's life depends on the outcome of the voting.

The most important in your question is the part concerning the threshold. This defines two cases:

If you used a bar chart, you could draw a line at the percentage of the needed votes for a definite result would be. If a veto is voted, you could simply hide the line or disable it since it has no further relevance. If you require a threshold you could either draw the line of needed votes accordingly, or draw a second line.

Not the answer you're looking for? Browse other questions tagged forms info-visualisation graphs voting or ask your own question.

22
What is the best voting system
6
What's the best way to graph results of a matrix ranking question?
7
Ways to avoid online contest voting fraud … is SMS account verification too much to ask?
2
Electronic voting UI - got any (good) examples?
4
Vote Up/Down and adding to favourites
1
How to influence effect of single vote on a like/dislike bar?
2
Weighted voting based on user experience
11
Effects of vote weighting for proven users in mature, gamified sites like Stack Exchange
44
Should edits affect upvotes/likes?
1
user voting reset