How can a TV Remote's UX be improved?

TV remotes have the astounding distinction of having about half as many keys as my keyboard and one thousandth the functionality. The problem stems from the (perceived) need to present every possible function for your TV, DVD player, ect, at a glance. Back when TVs had no form of menu or interface whatsoever this was necessary, but now a TV is functionally a large monitor, often with a rich menu system for both hardware settings and content selection.

But the remotes are still the same. 50 buttons and all most people use are the navigation buttons, numbers, and content controls like play/pause/ect. Part of the remaining problem is the old, persistent model of channels being just numbers. No interface to select them, no menus, just pick a number and remember it.

Thinking outside the (set top) box, how can a remote be modernized? Apple has taken a stab at it in a way with their own remote for Apple devices, benefiting from the device's native "soft" interfaces and simple controls, presenting only navigation keys and the forward/back buttons for content manipulation.

Roku has a similar but more complex remote that also benefits from a soft interface. Roku's remote has navigation keys in addition to slightly more content-manipulation keys (a pause button).

These super simple remotes seem ideal but how can such modern UX concepts be merged with the hulking system of features and past conventions that is the traditional TV?

Traditionally, TV interfaces - were restricted by two things: speed (or the lack of it) and resolution / readability.

Old TVs - even digital satellite boxes - were, until recently, extremely sluggish. There was a long latency between a user hitting a key and the machine responding. TVs themselves had low-resolution displays, which meant text and graphics had to be large, and any menus could only have a few options. Therefore, menu interfaces would mean lots of layers of dialogs that the user could only navigate extremely slowly. Likely for this reason, manufacturers opted for a 'flat' remote interface where most options were available at an instant.

But that was in the past. What can remotes do now?

1. Use analogies from older Audio / Video interfaces, like Play, Pause and Stop buttons

Users are familiar with the idea of, say, a stop button halting or cancelling an action, and play proceeding. They're already familiar with fast-forward and rewind navigating large bodies of information, so they're good candidates for page navigation buttons. This helps bridge the gaps between a user's traditional expectations of the device and the new version.

To an extent, this has already happened in digital sattelite: a set of coloured buttons with context-sensitive functions. The monitor might display the purpose of each button in a sidebar or bottom row, maximizing screen estate, which is vital for consumers still relying on low-resolution monitors (even HDTVs aren't that high-res)

Apple TV already does this - the Apple remote combines rewind / fast-forward keys with left and right buttons. This makes perfect sense to the user, and significantly improves the form factor. 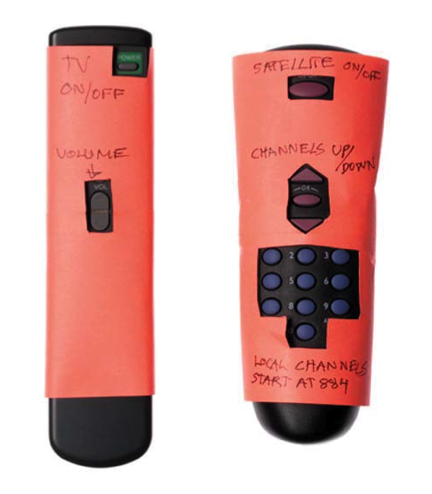 As buttons become a thing of the past, and touch interfaces take their place as a more natural way of interacting with computers and other devices, I see the remotes going the same way.

A problem with touch screens is that a remote has to be a pretty tough device.

If you have kids in the household, remotes get a lot of physical abuse.

And a remote is only as good as the UX of the onscreen design it controls.

Well, it's most definitely not going to happen by losing the buttons. How many of you look at your remote when you use it? Or would like to visually hunt down every button you need? It's kinda OK for phones but definitely not end all, be all solution.

Anyways. For remote, I'd go for stripped down design: As simple remote as possible, with only the most time critical commands on it, in order to have the user able to operate completely without looking at the remote itself, and keep the rest of it in well designed on-screen UI.

Grey functions could be achieved with keeping the button pressed for a second, or two. Program +/- (north-south) and volume +/- (east-west) are operated with "XY button".

Edit: As the first version was strictly for TV's, here's a version for DVRs/DVDs/whatnots.

No pause, as I would pause the playback when either, menu or guide is pushed (guide also includes recordings, DVD menus etc.).

Edit 2: Thought about it little bit more and decided to remove the program rocker (as it's really a relic from times when there was only so many channels). Also, decided that it wouldn't really need source button as the guide/menu button would be used for that (on-screen menu with tabs for different sources/devices). Had a play/pause button there for a while but decided against it since the navigation between devices would happen through the on-screen menu, it wouldn't be really clear what would happen if you would have say, Spotify playing and would be on DVR-tab with a recording selected.

Speaking of radical improvements and rethinking the whole system, take a look at Komandor-2: http://www.artgorbunov.ru/projects/komandor-2/

It’s on russian, but they have pretty universal visualizations of main concepts. 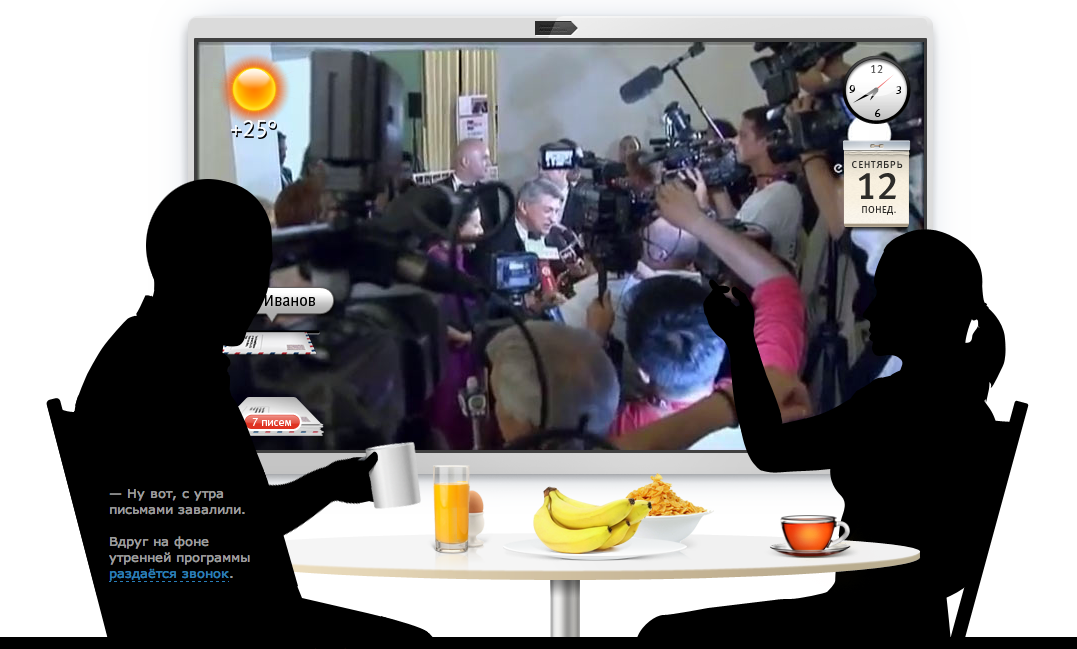 There was a great article written by Katie Hafner for the NY Times on the design of the famous TiVo remote control, and a follow-up piece done by Gizmodo with the designer Paul Newby.

Not the answer you're looking for? Browse other questions tagged interaction-design physical or ask your own question.

14
How can you indicate a hidden button on the back of a device?
9
How to handle settings which can be both set mechanically and via a computer?
5
How can I best display these options?
15
How can the design for elevator/lift door open/close buttons be improved?
1
Desktop tools installations' UX. How can it be improved?
58
"Do Not Disturb" tags in hotels, how can they be improved?
28
How can a retractable pen design be enhanced to discourage users from clicking the pen frequently?
0
How can I simplify a selection UI?
29
No one is clicking my slide box popup - Can it be improved?
93
How to avoid the "local elevator" problem?