Are desktop applications called “apps” yet?

Now that we're in a mobile-dominated world, is it acceptable to call computer programs that run on desktop computers Apps?

Take this example from the OSS Podlove subscribe button. When activated on a desktop computer, the term App is used: 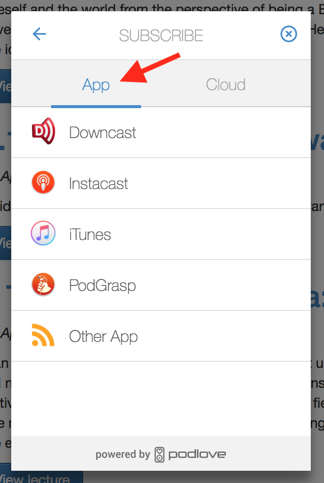 I had a visitor send a support request, "How do I subscribe to the podcast on my desktop computer," because they thought "App" meant it was only available for their mobile phone apps. He has a point, and I wonder if "app" is not yet appropriate for use on desktop platforms. 🤔

Furthermore, in this example, App is used to distinguish from Cloud, but actually the programs in the cloud are called web-apps. 😭

So, what is the best terminology to use for:

I think this is subjective/depends on the users (like Rob said in his answer), but I personally believe it's shifting that way. I don't like it, but I think that's what is happening.

To back up my assertion a little, both Apple and Microsoft now use "App Stores" to sell/provide desktop applications. If they stick with that, it seems very likely to have an impact on the way the general population thinks and speaks about this stuff.

If I can be allowed a little bit of futurism, I'm going to say the distinction between desktop and mobile will continue to blur over time and there won't really be a good reason to distinguish between "apps" on the two.

A front-of-mind example (as I just launched it): Spotify on my desktop is using the same information as spotify on my mobile device, and on my tablet device. It's already more convenient to just call it the Spotify app, and just talk about it like "spotify on mobile" or "spotify on desktop". "Outlook on iOS", "outlook on windows 10".

Again, as devices start to meld together, there won't be these distinctions to make. IMO the Nintendo Switch model - a handheld device that docks and instantly turns into a full-sized setup running exactly the same application(s) - is the probably-inevitable future of the casual user's mobile/laptop/desktop.

It depends on the level of expertise the user has. For an expert user or IT savvy people, "App" means application, whether it be mobile, desktop, web...

However, for many not so tech savvy people, "app" is a mobile application and "program" would be the term used for a desktop application.

Not the answer you're looking for? Browse other questions tagged mobile terminology desktop-application cloud or ask your own question.