Apple's round checkboxes - Where and when are they used?

We are building a cross platform app, and a decision maker on my team (who is an Apple user) wants all of our "Select to delete" checkboxes to be round, "Like Apple's Mail and Messages apps". 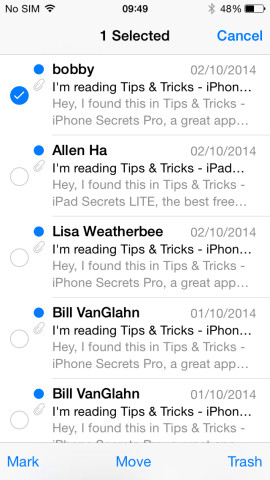 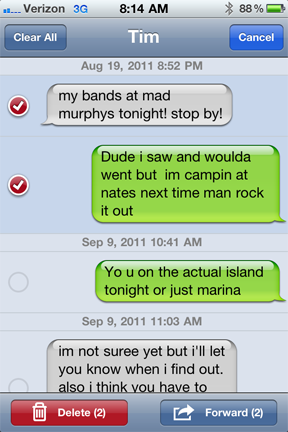 I personally find this confusing, I think they look like radio buttons. He disgarees that anyone would confuse round circles for radio buttons.

Have all iOS devices always used round checkmarks to delete items, or is this a new change?

Where and when does iOS use round checkmarks?

You mention the Apple references but it seems like you might not even be designing for iOS, or at least are looking more for UX advice in general than for the preferred choice on iOS apps.

Using my pretty new Android phone, if I open my text messages and hold-press on an item it selects it and shows a checked circle on the left just like in your Apple images.

I've deleted messages using this before, and as a user perspective I didn't find it confusing because I had first long-pressed on a row, and then the circles appeared with the 1 from the row I selected highlighted. I triggered it so it was obvious what it meant.

If I navigated to a new page and there were circles all down the side from the start I might think it was a radio list, but because they appear as a result of my action it seems obvious that I can choose multiple.

Anyway I think this is not only used by Apple, so if you are looking for some reference to show that Apple only uses them in certain circumstances, well Android uses them too so it seems more universal than that.

Smart people can use layouts designed for idiots too, so it makes sense to do it this way.

Anyway for this I think it won't be confused as a radio list if the user's action triggers the circles to appear.

I think one could only argue that round checkboxes would be confusing to users that actually understand the differences between checkboxes and radio buttons, most users don't. I don't believe the average user relies on shapes to know whether or not they can select multiple items. And I don't think users would actually be confused, rather they'd just feel a subtle annoyance at the inconsistency.

While I personally prefer my checkboxes square this might be more of a design decision than anything else.

If you want to make a strong argue towards square you might need to find design guidelines or conventions already in place in your app and argument for consistency. Consistency is an important and can often make a strong case towards one decision over another.

In general circular selection boxes should also be fine, given that there is no use case where there is a combination of multi select items along with single selection items, example in a schedular where a person can select multiple days but can only have single selection of exact time. In these cases having a traditional square shape for checkbox and circular one for radio button will be easy for the user to comprehend.

Not the answer you're looking for? Browse other questions tagged ios checkboxes or ask your own question.

84
Are round check boxes confusing or an accepted standard?
0
Where do I place my checkboxes in relation to labels?
12
How to indicate that a list view can be swiped to reveal controls?
0
How to hide additional rarely used checkboxes?
3
shape used for checkboxes
3
Are toggles pro usability when used to autofill a form?
0
iOS list with checkboxes and radio buttons alternative
3
Are toggle buttons a good alternative for checkboxes?