What situations might it be acceptable to design something that would be considered unethical?

In the recent StackOverflow Developer Survey, over 100,000 developers were asked a series of questions reflecting their experiences working in the industry.

On the subject of ethics, two questions were asked: 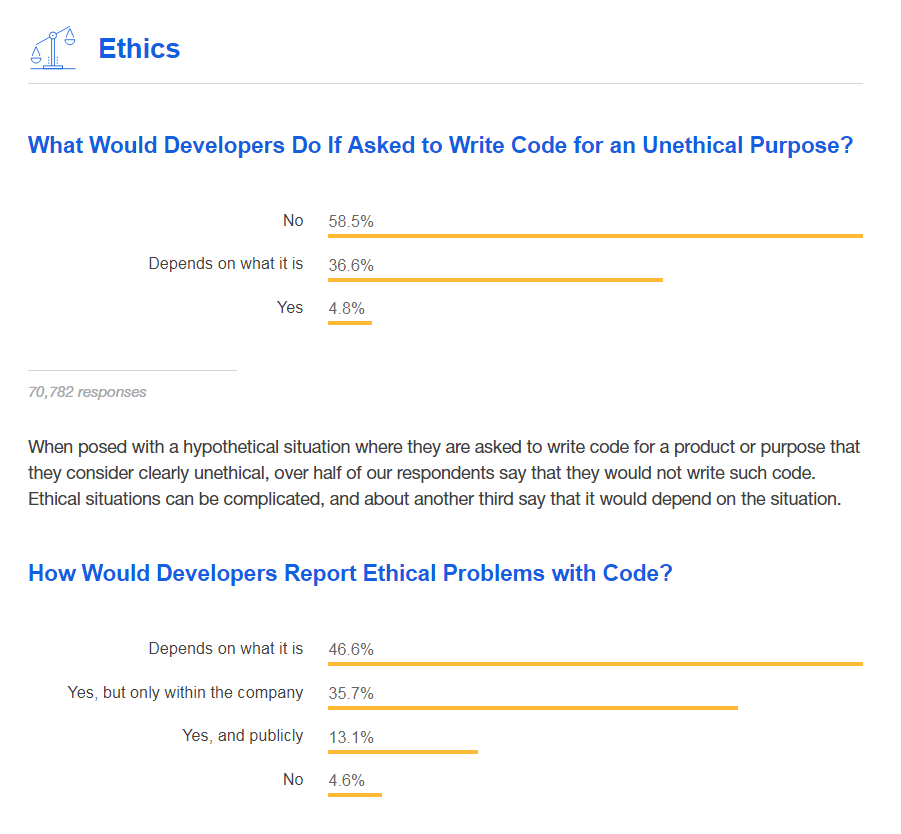 I was quite surprised that when posed with a hypothetical situation where they are asked to write code for a product or purpose that they consider clearly unethical, over 40% of the developers say that it would depend on the situation.

I think one possible scenario could be if it is relating to the health and well-being of the user but it forces them to do something against their wishes, but even that's a pretty difficult to say is clearly unethical.

Considering their response to another question about AI, the responses regarding ethics is a bit worrying, especially if designers work closely with developers to implement solutions:

If faced with the same question, what situation would it be acceptable for designers to take part in a design process for a product or purpose that they consider clearly unethical?

Here is an example of unethical design from Amazon. "Continue ordering without performing the additional action of purchasing premium" is in small text and hidden besides other text. The most prominent element is "pay immediately" -button.

Is this unethical? Certainly, you are tricking your users. Would designers proudly refuse designing this kind of things when their bosses ask? Hardly.

Marketing, advertising etc. are full of this kind of standard practices that are in gray area in ethics. Developers and designers are low-level workers who don't make the business decisions. Therefore many feel it's acceptable to leave the grey area decisions to the higher-ups.

To answer whether you should design something that could (note my change) be considered unethical, first: know thyself.

Or as Socrates put it:

The unexamined life is not worth living.

Some folk choose to be vegans. Others choose to work for humanitarian aid organizations. These choices are based on personal values. What is your "north star"?

Let's examine the phrase "designing something that could be considered unethical" in three different ways:

1. A designer with a possibly unethical company.

A UX designer may decline to work for online gaming / gambling firms, for ethical reasons. But how far should she go with that rationale? Should she refuse to work for companies that, for example, create any addictive behaviours or create wealth inequality?

2. A designer with an ethical company, asked to produce unethical designs.

This may be a tricky situation for a designer, and it is one where the individual's core values come into play. Designers may be asked to produce "dark patterns": When does a persuasive pattern become a 'dark' pattern?

3. A designer with an ethical company, choosing to produce unethical designs.

If a designer knowingly chooses to use dark pattens, this may seem obviously unethical to others. But maybe she saw competitor sites/apps operating similar patterns, and felt her actions were justified. It is not easy to take a principled stand, when the "herd" is behaving differently.

As with all moral/ethical questions, there are many gray areas, and while there are societal norms, the answer may lie within.

Ethics are always about given people in given situations. There's always a context. "It depends" is always true about ethics.

Conversely, morals are universal. I wouldn't rule out the possibility that the survey respondents were less than clear about this distinction between ethics and morals. I also think there was some wishful thinking involved. "What, me? I'd never do anything bad!"

That said, it's in the nature of a great many workplaces that individuals are removed or shielded not just from the decision-making process, but also from reliable data about the consequence of their actions, and the actions of their employers. Are the designers and developers at major web retailers informed about the notorious working conditions in the warehouses? Are they being unethical if they ignore reports about those conditions? Shouldn't the ethical employee keep an eye on such things?

The guy who drove the train to Auschwitz was 'just' a train driver, very likely a peaceful family man. He didn't decide the 'cargo'. It's easy for us to say he was behaving unethically, but maybe he was just not told what happened to that cargo after delivery. It's also possible to frame any dissent on his part as 'unethical' because it would be 'unprofessional' to refuse to do the job you're trained and paid to do. (I have no doubt this kind of coercion happens often to silence complaints about ethics).

If developers are organised in trade unions, they have far greater power to steer and inform the ethics of the workplace. It's interesting that the developer survey did not mention this possibility. IT-related trade unions local to me are amongst the fiercest critics of (e.g.) mass surveillance, sloppy security and other unethical practices.

An important prerequisite to being an ethical developer is to make sure that ethics are as much a part of 'the professional conversation' as preferred languages, libraries, frameworks, paradigms, methodologies.

An ethos is what makes a profession, rather than just a job. Doctors, Lawyers and Teachers are good examples, each profession with concrete ethical guidelines whose transgression can cost an individual not just their job, but their professional legitimacy and ability to continue practice.

No such guidelines for developers yet exist, so regardless of the survey results, I expect unethical development to continue just as before.

Not the answer you're looking for? Browse other questions tagged ethics design-ethics or ask your own question.

6
When does a persuasive pattern become a 'dark' pattern?